A feed dispenser is often confused with a feeding machine, but does not have the distribution unit.

A feed dispenser is often confused with a feeding machine, but does not have the distribution unit. Actually it is therefore something between a feed machine and hand feeding. A weighed portion of feed is placed on the dispenser and the dispenser will empty it during a fixed period, normally from one to three days. It either goes continuously or stepwise controlled by a control unit. To get the wanted feed ration, the actual amount of feed must be put in the dispenser. This is normally weighed out.

A great advantage with the feed dispenser is its simple and robust construction. It is also easy to monitor visually whenever it is functioning and the amount of feed that has been dispensed. The construction is favourable to use in research operations because if you weigh out the feed exactly you can be sure that the dispenser will supply the exact amount to the fish. The great disadvantage, com-pared to a feeding machine, is that it takes quite a long time to measure and/or weigh the feed that should be placed in the dispenser. 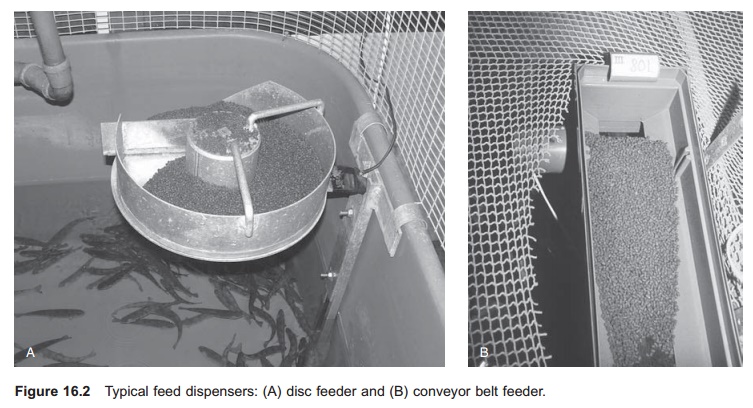 Several designs of feed dispenser are used (Fig. 16.2). In a disc feeder a scraper rotates on a horizontally fixed circular plate, and the feed falls off the edge of the plate and into the fish tank. A disc dispenser needs electricity to run the motor, normally 24 V a.c. The feeder normally goes step-wise, controled by a unit that regulates the start and stop intervals. Another much used construction is a rubber conveyor belt that is dragged along on rollers. When starting, the belt is dragged back-wards so it creates a surface where feed is supplied. The end of the belt is fixed to rollers; when these rotate the belt will be dragged up and the surface where the feed is lying will gradually be decreased so that the feed falls off and into the fish tank. This type is either powered by electricity or by clockwork. An advantage with this type of feed dispenser is the possibility of running it without electricity. Feed is either dispensed continuously or stepwise.