Indian economy is a typical example of mixed economy.

1. India has a mixed economy

Indian economy is a typical example of mixed economy. This means both private and public sectors co-exist and function smoothly. On one side, some of the fundamental and heavy industrial units are being operated under the public sector,while, due to the liberalization of the economy, the private sector has gained importance. This makes it a perfect model for public – private partnership.

Agriculture being the maximum pursued occupation in India, it plays an important role in its economy as well. Around 60% of the people in India depend upon agriculture for their livelihood. In fact, about 17% of our GDP today is contributed by the agricultural sector. Green revolution, ever green revolution and inventions in bio technology have made agriculture self sufficient and also surplus production. The export of agricultural products such as fruits, vegetables, spices, vegetable oils, tobacco, animal skin, etc. also add to forex earining through international trading.

India has emerged as vibrant economy sustaining stable GDP growth rate even in the midst of global downtrend. This has attracted significant foreign capital through FDI and FII.India has a high potential for prospective growth. This also makes it an emerging market for the world.

Emerging as a top economic giant among the world economy, India bags the seventh position in terms of nominal Gross Domestic Product (GDP) and third in terms of Purchasing Power Parity (PPP). As a result of rapid economic growth Indian economy has a place among the G20 countries. 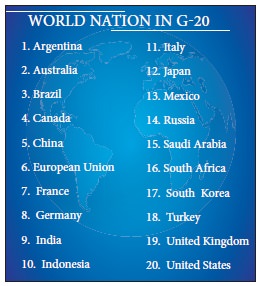 India’s economy is well known for high and sustained growth. It has emerged as the world’s fastest growing economy in the year 2016 -17 with the growth rate of 7.1% in GDP next to People’s Republic of China.

The service sector, contributes a lion’s share of the GDP in India. There has been a high rise growth in the technical sectors like Information Technology, BPO etc. These sectors have contributed to the growth of the economy. These emerging service sectors have helped the country go global and helped in spreading its branches around the world. 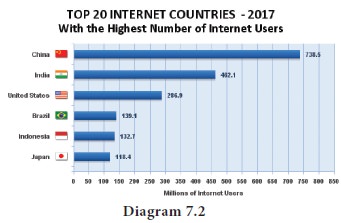 With the faster growth rate in the economy the standard of living has improved a lot.

This in turn has resulted in rapid increase in domestic consumption in the country. The standard of living has considerably improved and life style has changed.

Urbanization is a key ingredient of the growth of any economy. There has been a rapid growth of urban areas in India after independence. Improved connectivity in transport and communication, education and health have speeded up the pace of urbanization.

The Indian economy has been projected and considered as one of the most stable economies of the world. The current year’s Economic survey represents the Indian economy to be a “heaven of macroeconomic stability, resilience and optimism. According to the Economic Survey for the year 2014-15, 8%-plus GDP growth rate has been predicted, with actual growth turning out to be a little less (7.6%). This is a clear indication of a stable macroeconomic growth.

The human capital of India is young. This means that India is a pride owner of the maximum percentage of youth. The young population is not only motivated but skilled and trained enough to maximize the growth. Thus human capital plays a key role in maximizing the growth prospects in the country. Also, this has invited foreign investments to the country and outsourcing opportunities too. 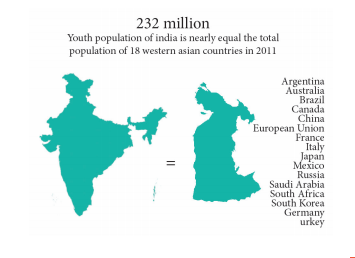 There exists a huge economic disparity in the Indian economy. The proportion of income and assets owned by top 10% of Indians goes on increasing. This has led to an increase in the poverty level in the society and still a higher percentage of individuals are living Below Poverty Line (BPL). As a result of unequal distribution of the rich becomes richer and poor becomes poorer.

Even though there has been a constant growth in the GDP and growth opportunities in the Indian economy, there have been steady increase in the prices of essential goods. The continuous rise in prices erodes the purchasing power and adversely affects the poor people, whose income is not protected.

Even though there has been a gradual improvement in the infrastructural development in the past few decades, there is still a scarcity of the basic infrastructure like power, transport, storage etc.

With growing youth population, there is a huge need of the employment opportunities. The growth in production is not accompanied by creation of job. The Indian economy is characterized by ‘jobless growth’.

The level of technology in agriculture and small scale industries is still outdated and obsolete.

Scientific study of the characteristics of population is known as Demography. The various aspects of demographic trends in India are:

a. Size of Population

The negative growth during 1911-21 was due to rapid and frequent occurrence of epidemics like cholera, plague and influenza and also famines. The year 1921 is known as the ‘Year of Great Divide’ for India’s population as population starts increasing.

The 2011 census reveals growth of youth population which is described as ‘demographic transition’.

b. Birth rate and death rate

Crude Birth rate: It refers to the number of births per thousand of population.

Crude Death rate: It refers to the number of deaths per thousand of population

Crude birth and death rates of India during various years 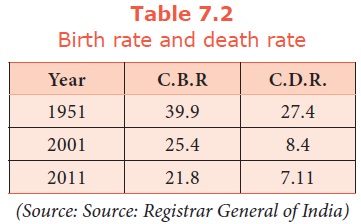 It refers to the average number of persons residing per square kilometre. It represents the man - land ratio. As the total land area remains the same, an increase in population causes density of population to rise. 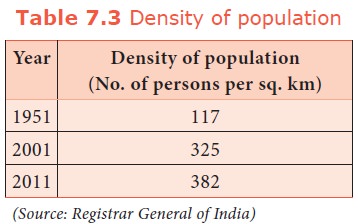 It refers to the number of females per 1,000 males. It is an important indicator to measure the extent of prevailing equity between males and females at a given point of time. 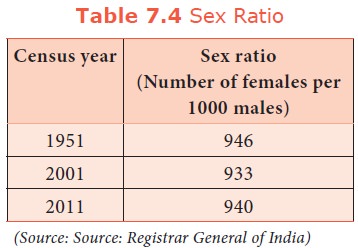 In India, the sex ratio is more favourable to males than to females. In Kerala, the adult sex ratio is 1084 as in 2011. The recent census (2011) shows that there has been a marginal increase in sex ratio. Haryana has the lowest sex ratio of 877 (2011) among other states, while Kerala provides better status to women as compared to other States with 1084 females per 1000 males 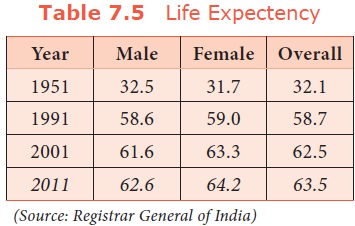 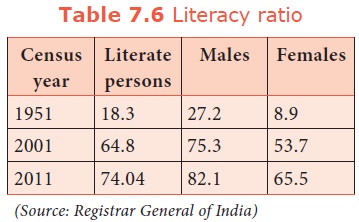