The members of this group are A,D,E and K. All these vitamins are not soluble in water and readily soluble in fat dissolving organic solvents. Inside the body for their transport and metabolism they need the presence of fats.

Vitamin A is found only in foods of animal origin. It is present in almost all species of fish, birds and mammals. The yellow plant pigments α, β and γ carotenes and cryptoxanthin are precursors of vitamin A. The body has the ability to convert these carotenoid compounds present in the diet into vitamin A.

The chemical structure of β - carotene is such that it oxidizes to form two molecules of vitamin A, the other provitamins form only one. b-carotene is more efficiently converted to vitamin A than α - or γ - carotene or cryptoxanthin.

There are two forms of vitamin A: Vitamin A1 which occurs in the liver of marine water fish and Vitamin A2 found in the liver of fresh water fish. The vitamin A which contain alcoholic group in the side chain is called as retinol (Fig. 8.1) and which contain aldehyde group is known as retinal. Though the two vitamins differ slightly in their chemical structures their physiological functions are the same. 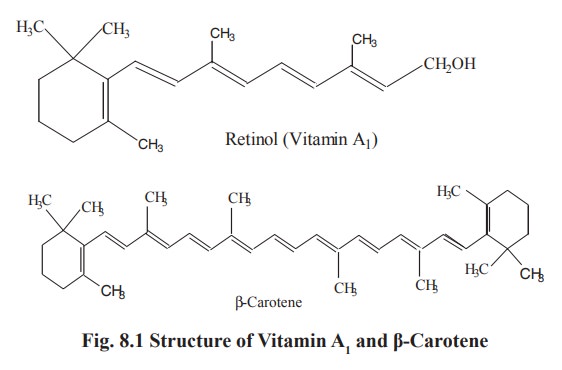 Vitamin A is essential

·           for the formation of rhodopsin (visual purple) a complex substance formed from retinol and protein. Rhodopsin, a pigment found in retina is necessary for vision in dim light.

·           for the maintenance of healthy skin, particularly mucous membrane of the cornea and the lining of respiratory tract.

The liver of any animal is a rich source of vitamin A. Fish liver oil is an excellent source. Whole milk, egg yolk, dark green leafy vegetables and deep yellow vegetables and fruits are rich in carotenes, which can be converted into vitamin A by the intestinal wall.

Vitamin A requirement is based on the intake to maintain the normal blood level. Adults placed on a vitamin A free diet are found to show no change in the level for several weeks.The capacity of the body to store vitamin A provides for an effective emergency supply. Recommended amount of Vitamin A for different age group is as follows:

Vitamin A and carotene are absorbed from the small intestine into the lymph system. The maximum absorption is reached 3 to 5 hours after consumption. The rate of absorption of vitamin A is more rapid than that of carotene. In the human being about 95% of the vitamin A stored in the body is found in the liver with small amount in the lungs, adipose tissue and kidneys.

The earliest sign of vitamin A deficiency is concerned with vision. Initially there is a loss of sensitivity to green light, followed by impairment to adapt to dim light. This condition leads to night blindness. More prolonged or severe deficiency leads to the ulceration of cornea and this condition is known as xerophthalmia or keratomalacia.

There are two distinct forms of Vitamin D

Cholecalciferol (Vitamin D3) is the natural form of the vitamin occurring in foods (Fig. 8.2). It can be formed under the skin from 7 dehydro cholesterol by the influence of sun light (ultra violet (UV) radiation)

Ergo calciferol (vitamin D2) is a synthetic form of the vitamin which has the same activity as the natural vitamin. It is produced by the UV radiation of ergo sterol, a compound which can be extracted from yeast. This is the form of vitamin which is added to commodities such as margarine and baby foods. 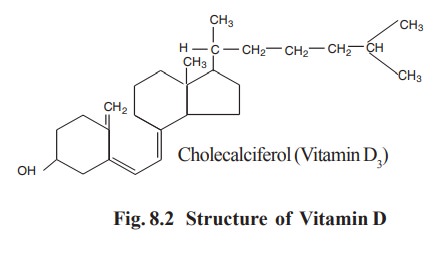 Vitamin D is not widely distributed in nature and the best sources are fish oil, especially liver oil. Milk, butter and egg yolk are the only foods in the ordinary diet that contain vitamin D.

It is difficult to make standard recommendations for the dietary requirements of vitamin D since the amount of vitamin D produced in the body by the action of sunlight varies from person to person. Many people may obtain this vitamin from sunlight. It is, however certain that babies and growing children require more vitamin D than adults, due to rapid growth and bone development.

Fat helps in the absorption of vitamin D and bile is essential for its absorption. Vitamin D enters into the general circulation via lymph and stored largely in liver and kidneys.

Vitamin E activity is possessed by a number of compounds known as tocopherols. Among these compounds α-tocopherol is known as vitamin E. Structurally vitamin E contains a dihydro benzopyran nucleus with an isoprenoid side chain (Fig. 8.3). Many of them are pale yellow oils soluble in fat. 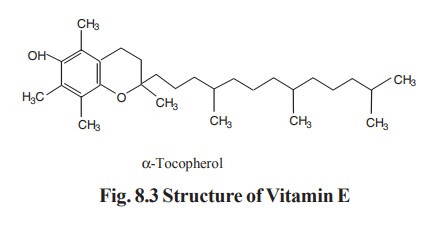 The principal role of vitamin E appears to be as an antioxidant. By accepting oxygen, vitamin E can prevent the oxidation of vitamin A in the intestinal tract, thus making vitamin A available for body use. Vitamin E also reduces the oxidation of the poly unsaturated fatty acids, thereby helping to maintain normal cell membrane. It protects the red blood cells against hemolysis. Vitamin E is required by animals, and presumably, by humans for the normal reproductive processes. It also plays an important protective role during ageing of cells.

There is some evidence that higher intake of vitamin E may have a useful protective effect against the development of ischaemic heart disease. This is because high concentrations of vitamin E inhibit the oxidation of poly unsaturated fatty acids in plasma lipoproteins and this oxidation which is responsible for the initiation of atherosclerosis (deposition of fat in the coronory artery walls). The levels that appear to be beneficial are of the order of 17-40 mg α -tocopherol/day, which is above what could be achieved by eating ordinary foods.

Vitamin E, like other fat soluble vitamins, is absorbed along with fat in the intestines.

It is stored in the liver, muscle and body fat.

Vitamin E deficiency cause the following disorders in animals.

Vitamin K is known as the antihemorrhagic vitamin.

Three compounds which have the biological activity of vitamin K are

1.        Phylloquinone, which is the normal dietary source, being found in green leafy vegetables.

2.        Menaquinones, which are a family of closely related compounds synthesized by the intestinal bacteria, with differing lengths of the side chain.

3.        Menadione, a synthetic compound which can be metabolised to yield phylloquinone (Fig 8.4). 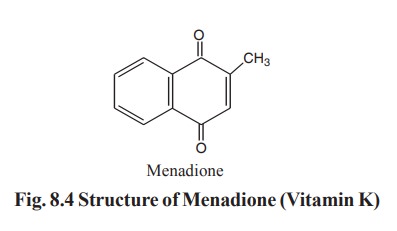 Vitamin K is needed for the formation of prothrombin, a substance necessary for blood clotting.

Being fat-soluble, its absorption is enhanced by sufficient amount of bile salts mainly in the jejunum by the way of lymphatics. Liver stores appreciable amounts. It is present in blood stream in significant amount. All tissues contain small amounts of vitamin K.

The deficiency of vitamin K leads to a lowering of prothrombin level and increased clotting time of blood. This may lead to hemorrhagic conditions. Vitamin K deficiency causes hemorrhagic disease of the newborn.