The diagnosis of factitious disorder is made in several ways.

If there is suspicion of factitious disorder, confirmation can be difficult. Laboratory examination can confirm some fac-titious diagnoses such as exogenous insulin or thyroid hormone administration. Collateral information from family members or previous health care providers can also be extremely helpful. Factitious disorder with psychological signs and symptoms can 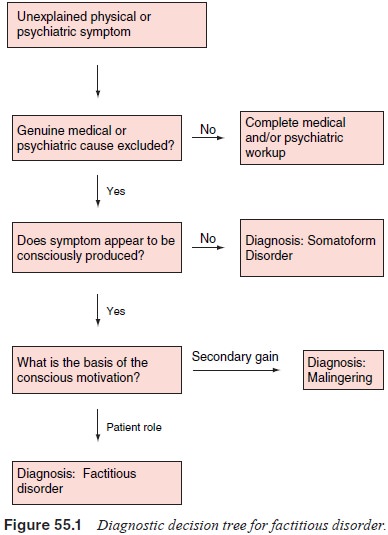 be particularly difficult to diagnose, as so much of psychiat-ric diagnosis relies on the patient’s report. However, there is some evidence that neuropsychological testing may be helpful in making the diagnosis. There are conflicting reports about the ability to detect over 90% of cases of factitious post traumatic stress disorder using the MMPI. In addition, there is a report of MMPI test results being used to support a diagnosis of facti-tious disorder with psychological features in a woman thought to be feigning symptoms of multiple personality disorder (see Figure 55.1).

The nature of factitious disorder makes it difficult to determine how common it is within the population. Patients attempt to conceal themselves, thereby artificially lowering the prevalence. The tendency of patients to present several times at different facilities, however, may artificially raise the prevalence. Most estimates of the prevalence of the disease, therefore, rely on the number of factitious patients within a given inpatient popula-tion. Such attempts have generated estimates that 0.5 to 3% of medical and psychiatric inpatients suffer from factitious disor-der. Of 1288 patients referred for psychiatric consultation at a Toronto general hospital, 10 (0.8%) were diagnosed with facti-tious disorder. A prospective examination of all 1538 patients hospitalized in a Berlin neurology department over 5 years found five (0.3%) cases of factitious disorder. An examination of 506 patients with fever of unknown origin (FUO) revealed that 2.2% of the fevers were of factitious origin, and a review of 199 Belgian patients with FUO found seven of 199 (3.5%) to be factitious. A similar study of patients with FUO at the National

In addition, childhood developmental disturbances are thought to contribute to factitious disorder. Predisposing fac-tors are thought to include 1) serious childhood illness or ill-ness in a family member during childhood, especially if the illness was associated with attention and nurturing in an other-wise distant family, 2) past anger with the medical profession, 3) past significant relationship with a health care provider, and 4) factitious disorder in a parent (McKane and Anderson, 1997).

Patients with factitious disorder create illness in pursuit of the sick role. For these patients, being in the sick role allows them to compensate for an underlying psychological deficit. Most authors identify several common psychodynamic motiva-tions for factitious disorder. First, patients with little sense of self may seek the sick role in order to provide a well-defined iden-tity around which to structure themselves. Others may seek the sick role in order to meet dependency needs which have gone unmet elsewhere. As a patient, they receive the attention, caring and nurturing of the health care environment and are relieved of many of their responsibilities. In addition, some patients may engage in factitious behaviors for masochistic reasons. They feel they deserve punishment for some forbidden feelings and thus they should suffer at the hands of their physicians. Other patients may be motivated by anger at physicians and dupe them in re-taliation. Patients with a history of childhood illness or abuse may attempt to master past traumas by creating a situation over which they have control. Finally, some authors have speculated that some patients may be enacting suicidal wishes through their factitious behavior.