Like most other autoimmune diseases, IDDM is multifactorial, resulting from the unfavorable interaction of genetic and environmental factors.

Like most other autoimmune diseases, IDDM is multifactorial, resulting from the unfavorable interaction of genetic and environmental factors.

IDDM has a strong hereditary compo-nent, as assessed by the high disease concordance rate in monozygotic twins (30 to 40 percent). Approximately half of this heredity is due to MHC genes (the IDDM concordance rate in HLA identical siblings is on the order of 15 percent).

HLA-predisposing genes are essen-tially HLA DR3 and DR4 or their DQ counterparts. In fact, there are two predisposing haplotypes: DQA1*0501 DQB1*0201 and DQA1*0301 DQB1*0302. The relative risk associated with these genes (or set of genes, the haplotype) remains relatively small (less than five), except when considering DR3/DR4 het-erozygotes, which is surprising consider-ing the major influence of HLA on IDDM heredity. It has thus been assumed that other genes within the MHC could be in operation, in particular a gene located between HLA-B and TNF.

Non-MHC genes are also important. A large number of them (approximately twenty) have been recognized in the NOD mouse and in human IDDM thanks to systematic genome scanning rather than by the study of candi-date genes, which has proven rather disap-pointing, with the exception of the insulin and CTLA-4 genes. Much more work remains to be done to identify the precise genes in question. One may hope that the complete knowl-edge of the sequence of the human genome will help in achieving this major goal. One should add that in addition to predisposition genes, there are a number of HLA (DR2) and non-HLA-protective genes that oppose the effect of predisposition genes.

The 60 to 70 percent discordance rate observed in monozygotic twins, despite sharing many environmental fac-tors, indicates the importance of the environment in IDDM predisposition. The two categories of environmental factors are triggering and protective. Triggering factors have proven to be elusive. Pancrea-totropic viruses are the best candidates. There is some epidemiological evidence for a role for enteroviruses, notably Coxsackie B4, but the data have never been fully con-vincing, even though there is a renewed interest in their validity. The lack of clear epidemiological or serological evidence could be due to the long lapse in time between the initial infection and its clini-cally detectable consequence (diabetes). In fact, the virus could be cleared long before its pathogenic effect is visible (hit-and-run hypothesis). Viruses could act in two ways. Viral proteins could resemble certain β-cell autoantigens (antigen mimicry). More likely, the local inflammation induced by the virus enhances the immunogenicity of β-cell autoantigens.

No clear evidence has been collected for other triggering environmental factors. Cow’s milk proteins have been incrimi-nated through antigen mimicry between a lactalbumin peptide and a β-cell autoan-tigen (p69) but the hypothesis remains to be confirmed. However, the environment may have a protective effect. This hypoth-esis was initially suggested by the pre-viously mentioned observation that the incidence of IDDM in NOD mice tightly depends on the sanitary conditions of the facilities where they are bred (the cleaner, the higher the disease incidence). A large number of pathogens (bacteria, viruses, or parasites) prevent diabetes onset in NOD mice infected at an early age. These observations fit with considerable epi-demiological evidence, indicating that human IDDM occurs frequently in coun-tries or people with high socioeconomic levels who are protected from infections (better quality of water and food, better conditions of lodging, more common usage of vaccinations and antibiotics; see Figures 15.5, 15.6, 15.7). Mechanisms underlying the protective effect of infec-tions on IDDM, which are reminiscent of those observed in other autoimmune dis-eases and allergic disorders are multifac-torial: homeostatic competition, bystander suppression through the effect on regu-latory cytokines, and toll-like receptor stimulation. 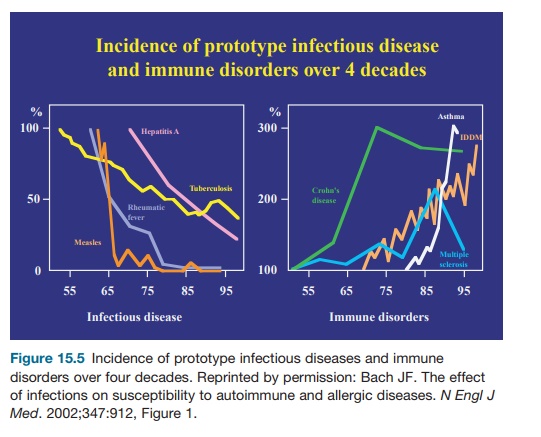 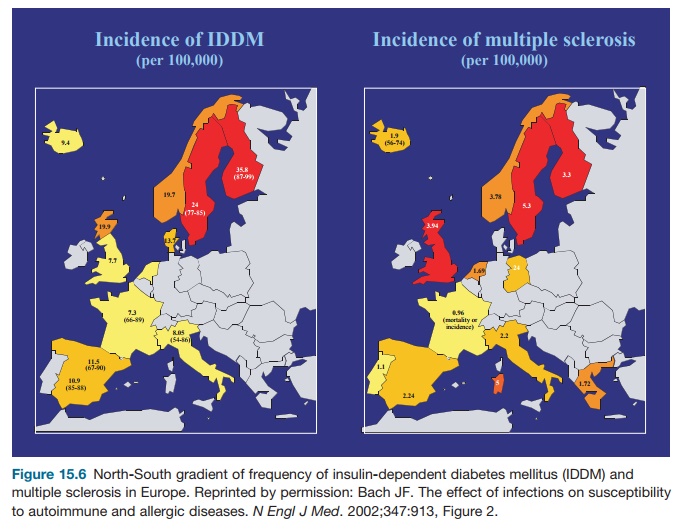 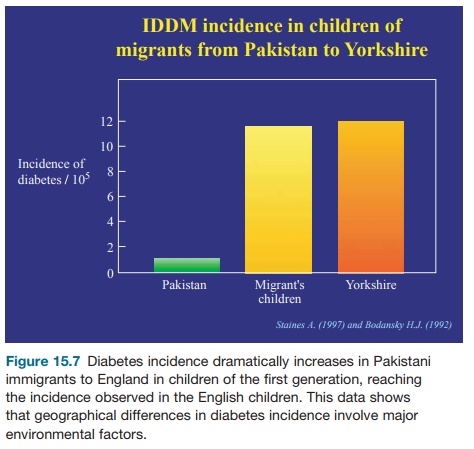 Viruses have been considered major potential candidates in the etiology of IDDM for several decades. The viral hypothesis was initially based on the temporal relationship between defined virus infections and onset of overt dia-betes. This sequence was notably evoked for Coxsackie B4 virus. The argument is not very robust if one considers that T-cell-mediated islet aggression probably begins many years before clinical onset in most patients and thus the incrimi-nated infection. The infection could at most exacerbate the anti-islet response and accelerate disease onset. One should add that serological evidence (detection of antiviral antibodies in type I diabetes patients) has always been elusive have the episodic claims of virus isolation from pancreatic tissue. The interest in enterovi-ruses has recently been renewed by a set of observations. It has thus been reported that the frequency of enterovirus infec-tions studied using both serology and testing for the presence of enterovirus RNA was correlated with islet-specific autoantibodies in subjects at risk of devel-oping type I diabetes. An increased T-cell response to Coxsackie B4 antigens was also observed in a recently onset diabetic patient. All these data show significant differences, but their contribution to the etiologic role of enteroviruses remains indirect since positive results are also observed in a large percentage of the nor-mal population.

At the experimental level, there are rather limited data also. Encephalo-myocarditis virus has been reported to induce IDDM in mice, but IDDM is of the cytopathic type in that case without much immunological involvement. The Coxsackie B4 virus can induce diabetes in mice with some features of autoimmune type I diabetes, but it is not clear whether disease pathogenesis involves a direct cytopathic effect or an immune β-cell attack secondary to virus-induced inflam-mation. This interpretation is compat-ible with data showing that Coxsackie B4 infection of BDC 2.5 mice, which have a limited nontransgenic TCR repertoire, show accelerated diabetes.

Other interesting data have been de rived from the RIP-LCMV transgenic mice. These mice develop IDDM after LCMV infection, according to a hit-and-run mechanism. The virus infection stimulates the induction of LCMVgp-specific CD8 cytotoxic T lymphocytes, which cause the disease even though the virus is rapidly cleared through the action of such cyto-toxic T cells.

Collectively, these data are compat-ible with a viral etiology of type I diabetes even though the diabetogenic virus is still unidentified. The etiological infection may take place many years before clini-cal onset, questioning the role of preclini-cal infections and the disease’s seasonal nature. This lag time would explain the difficulty in identifying the diabetogenic viruses, which in addition might not be unique. Several pancreatotropic viruses could operate through nonspecific inflam-matory mechanisms. Antigen mimicry is possible, but there is no good evidence for this hypothesis in humans (except a ques-tionable homology between a Coxsackie B4 virus protein and GAD) and very little evidence in the mouse. IDDM is accel-erated in BB rats infected with Kilham virus.