Burns and areas of necrosis resulting from vascular stasis or insufficiency are subject to infection with the same organisms that predominate in postsurgical wound infections.

Some major causes of skin and wound infections are shown in Table 59 – 1. S. aureus re-mains the single most common cause of infection of clean surgical wounds; however, the number of infections caused by opportunistic Gram-negative organisms is increasing. This finding reflects the extension of surgical intervention to more patients whose de-fenses are compromised or who would have been unacceptable surgical risks before the introduction of new technical and therapeutic procedures. Severe invasive group A strep-tococcal infections with the toxic shock-like syndrome often begin with a simple skin or wound infection. 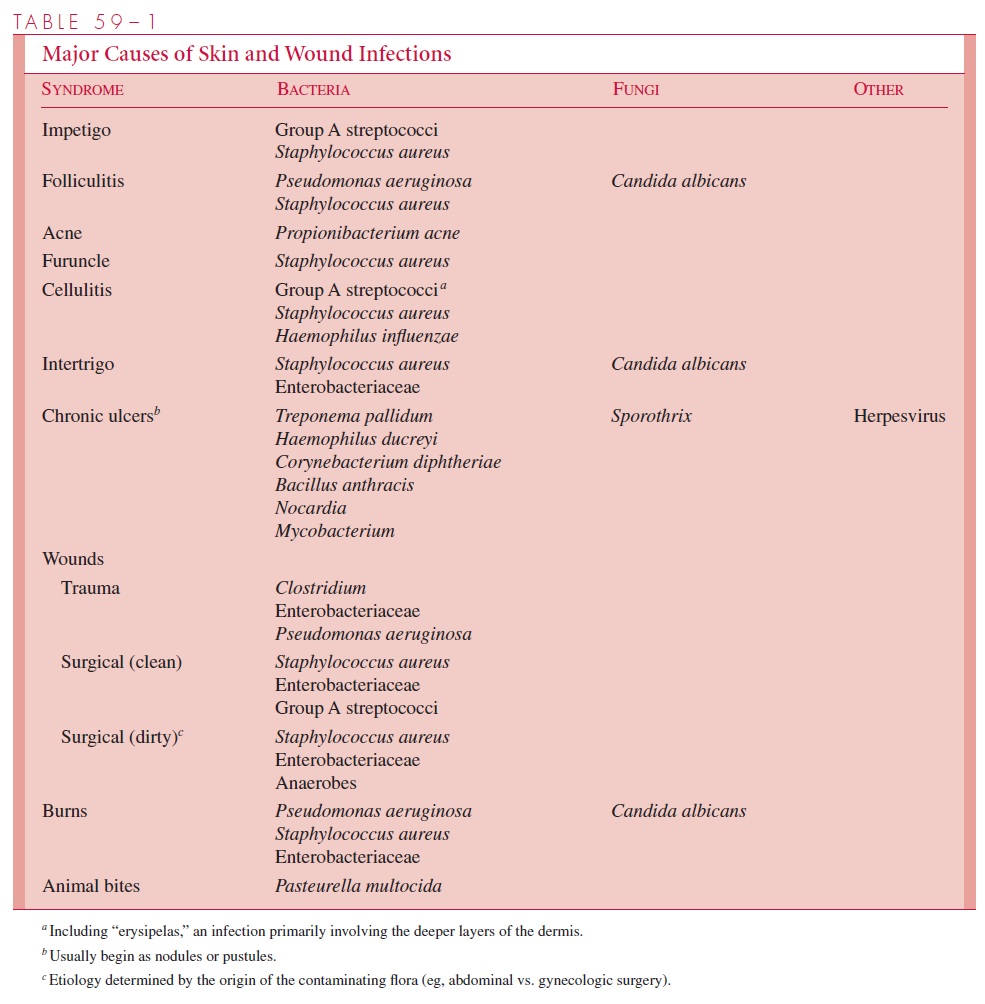 Anaerobic Gram-negative wound infections have been reported increasingly in the last two decades or so as a result of the higher incidence of such infections in immunocompromised patients and better laboratory recognition. Most infecting organ-isms derive from normal floral sites and the majority are Bacteroides, often in combi-nation with anaerobic Gram-positive cocci and facultative aerobic bacteria. They tend to be associated with necrosis, which may spread subcutaneously, and with throm-bophlebitis, which may lead to bacteremia. Most postpartum uterine infections are now caused by Gram-negative anaerobes or anaerobic Gram-positive cocci; they can range from self-limiting infections to severe infections of the uterus with pelvic thrombophlebitis. Human bite wounds are particularly subject to anaerobic infections. In contrast, infected bites of domestic animals (dogs, cats) are almost always due to Pasteurella multocida.

Burns and areas of necrosis resulting from vascular stasis or insufficiency are subject to infection with the same organisms that predominate in postsurgical wound infections. However, P. aeruginosa causes particularly serious infections in burns, with loss of skin grafts and a high risk of septicemia and death. If the fluid electrolyte and nutritional defi-ciencies of a burned patient can be controlled, the greatest hazard to life is infection.

Tetanus remains a threat to the unimmunized or inadequately immunized individual, par-ticularly from heavy contamination of puncture wounds or introduction of foreign bodies such as splinters, soil, or clothing into the subcutaneous tissues. C. tetani never spreads be-yond the site of the local lesion, and adequate circulating antibody from tetanus toxoid im-munization will prevent the development of the disease. Gas gangrene (clostridial myositis) can develop within a few hours of traumatic injury and lead to rapid death. C. perfringens is the most common cause, and its α-Toxin produces the spreading tissue damage and muscle death. Other aerobic and anaerobic bacteria are invariably present and sometimes play an im-portant etiologic role. The disease is always associated with muscle trauma and necrosis, which provide the conditions for anaerobic multiplication. Compound fractures, gunshot wounds, and similar extensive injuries that allow entry of clostridial spores set the stage for the disease. Prevention involves surgically debriding all necrotic or potentially necrotic tissue as soon as possible and administering high-dose penicillin.