Newton studied the motion of an object and gave a set of three equations of motion.

The three equations of motion can be written as,

Let us try to derive these equations by graphical method. 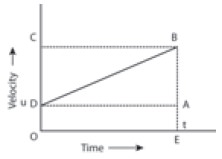 Graph shows the change in velocity with time for an uniformly accelerated object. The object starts from the point D in the graph with velocity u. Its velocity keeps increasing and after time t it reaches the point B on the graph.

The initial velocity of the object = u = OD = EA

Also from the graph we know that, AB = DC

This is first equation of motion.

s = area of the quadrangle DOEB

This is second equation of motion.

From the graph the distance covered by the object during time t is given by the area of the quadrangle DOEB. Here DOEB is a trapezium. Then

This is third equation of motion.

Motion of objects under the influence of gravitational force of the earth – Freely falling body:

Take a large stone and a small eraser. Stand on the top of a table and drop them simultaneously from the same height? What do you observe?

Take a small eraser and a sheet of paper. Stand on the top of a table and drop them simultaneously from the same height? What do you observe?

Take two sheets of paper having same mass. Now, crumple one of the sheets into a ball and drop the sheet and the ball from the same height. What do you observe? 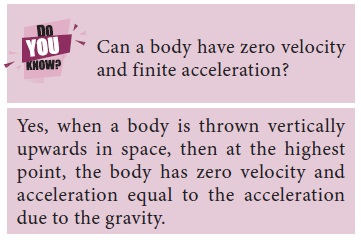 If we do experiment in a tall glass jar from which air has been sucked out, both the paper and the eraser would fall at the same rate. Galileo dropped different objects from the top of the Leaning Tower of Pisa in Italy to prove the same. We know that an object experiences acceleration during free fall. This acceleration experienced by an object is independent of mass. This means that all objects hollow or solid, big or small, should fall at the same rate.

The equation of motion for a freely falling body can be obtained by replacing ‘a’ in equations 1 to 3 with g, the acceleration due to gravity. For an object falling freely, its initial velocity u = 0. Thus we get the following equations

when we through an object vertically upwards, it moves against the acceleration due to gravity. Hence g is taken to be –g in such cases.

If you carefully observe, on being released the stone moves along a straight line tangential to the circular path. is is because once the stone is released, it continues to move along the direction it has been moving at that instant. is shows that the direction of motion changed at every point when the stone was moving along the circular path. When an object moves with constant speed along a circular path, the motion is called uniform circular motion. When an object is moving with a constant speed along a circular path, the velocity changes due to the change in direction. Hence it is an accelerated motion.

If an object, moving along a circular path of radius r, takes time T to come back to its starting position, the speed v is given by, 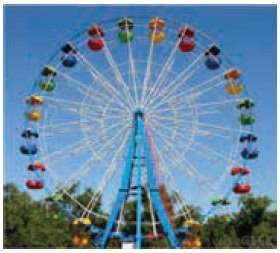