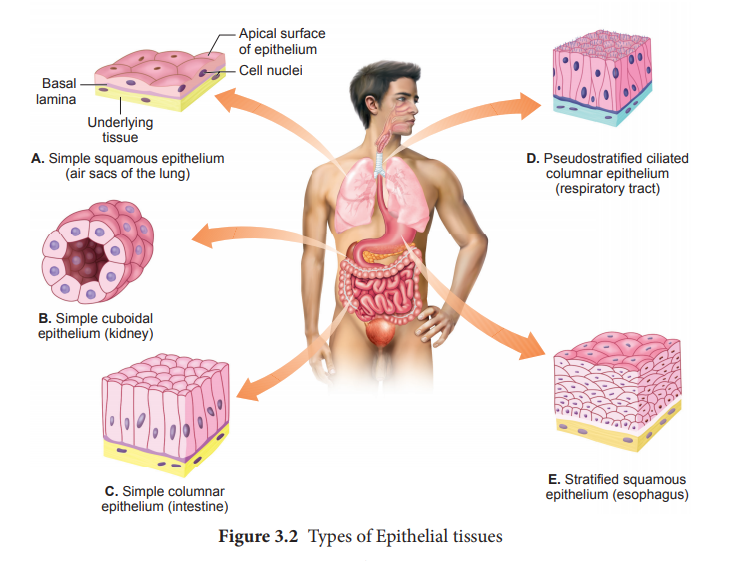 Epithelial tissue is a sheet of cells that covers the body surface or lines the body cavity.

Simple epithelium is composed of a single layer of cells. They are found in the organs of absorption, secretion and filtration. Simple epithelial tissue is further classified into squamous epithelium, cuboidal epithelium, columnar epithelium, ciliated epithelium and pseudostratified epithelium (Figure 3.2). The squamous epithelium is made of a single thin layer of flattened cells with irregular boundaries. They are found in the kidney glomeruli, air sacs of lungs, lining of heart, blood vessels and lymphatic vessels and are involved in functions like forming a diffusion boundary and filtration in sites where protection is not important. The cuboidalepithelium ismade of a single layer of cube like cells. This tissue is commonly found in the kidney tubules, ducts and secretory portions of small glands and surface of the ovary. 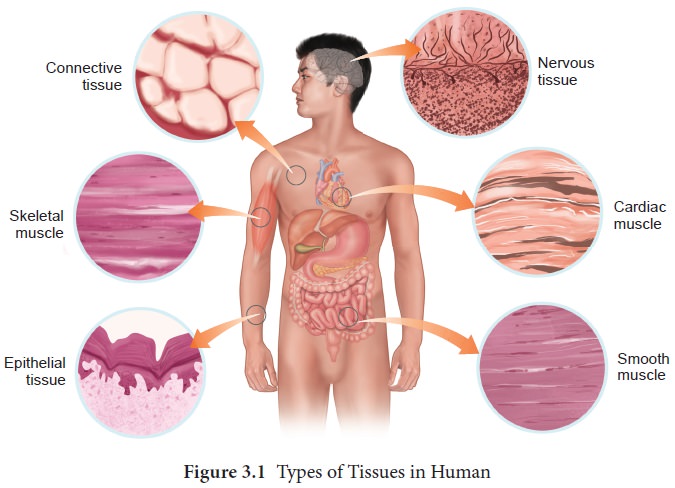 Its main functions are secretion and absorption. The columnar epithelium is composed of single layer of tall cells with round to oval nuclei at the base. It lines the digestive tract from the stomach to the rectum. The two modifications of this lining are the presence of microvilli on the apical surface of the absorptive cells and Goblet cell which secretes the protective lubricating mucus. The functions of this epithelium include absorption, secretion of mucus, enzymes and other substances. If the columnar cells bear cilia on their free surfaces they are called ciliated epithelium. This ciliated type propels mucus by ciliary actions and it lines the small bronchioles, fallopian tubes and uterus. Nonciliated type lines most of the digestive tract, gall bladder and secretory ducts of glands.

Pseudo-stratified epithelial cells are columnar, but unequal in size. Although the epithelium is single layered yet it appears to be multi-layered because the nuclei lie at different levels in different cells. Hence, it is also called pseudostratified epithelium and its functions are protection, secretion and absorption. Ciliated forms line the trachea and the upper respiratory tract. The non ciliated forms, line the epididymis, large ducts of a glands and tracts of male urethra.

Some of the cuboidal or columnar cells get specialized for secretion and are called glandular epithelium (Figure 3.3). They are mainly of two types: unicellular, consisting of isolated glandular cells (goblet cells of the alimentary canal), and multicellular, consisting of cluster of cells (salivary gland). On the basis of the mode of pouring of their secretions, glands are divided into two categories namely exocrine and endocrine glands. Exocrine glands secrete mucus, saliva, earwax, oil, milk, digestive enzymes and other cell products. These products are released through ducts or tubes. In contrast endocrine glands do not have ducts. 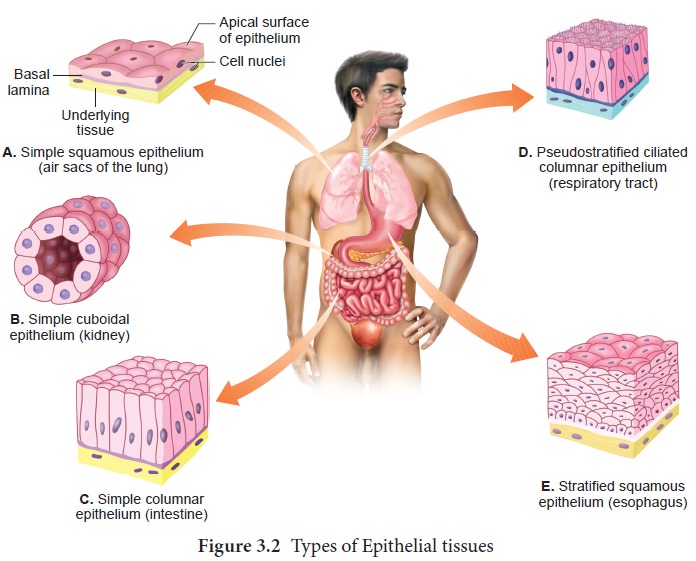 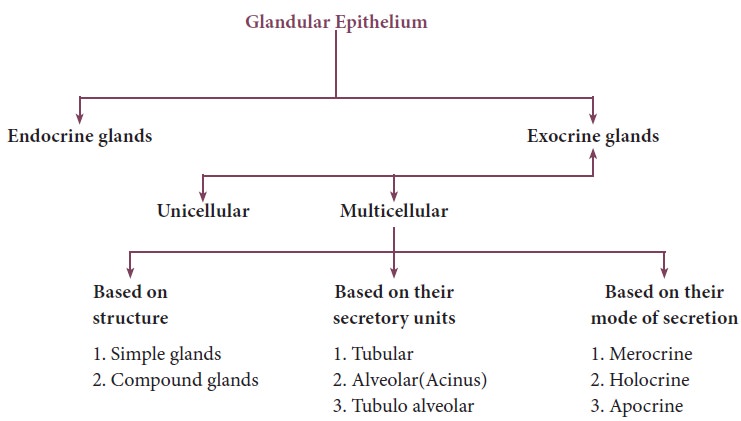 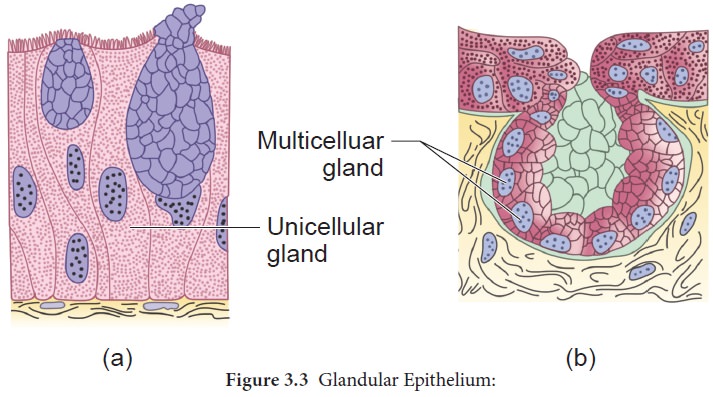 Compound epithelium is made of more than one layer (multi-layered) of cells and thus has a limited role in secretion and absorption(Figure 3.4). The compound epithelia may be stratified and transitional. 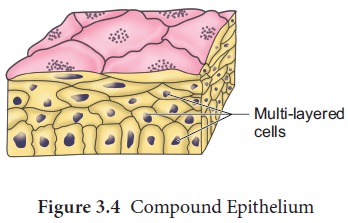 Their main function is to provide protection against chemical and mechanical stresses. They cover the dry surface of the skin, the moist surface of buccal cavity, pharynx, inner lining of ducts of salivary glands and of pancreatic ducts. There are four types of compound epithelium namely, stratified squamous epithelium, cuboidal epithelium, columnar epithelium and transitional epithelium. Stratified squamous epithelium is of two types called keratinized type which forms the dry epidermis of the skin and the non keratinized type forms the moist lining of the oesophagus, mouth, conjunctiva of the eyes and vagina. Stratified cuboidal epithelium mostly found in the ducts of sweat glands and mammary glands. Stratified columnar epithelium has limited distribution in the body, found around the lumen of the pharynx, male urethra and lining of some glandular ducts.

Transitional Epithelium is found lining the ureters, urinary bladder and part of the urethra. This epithelium allows stretching and is protective in function.

All cells of the epithelium are held together with little intercellular material. In most of the animal tissues, specialized junctions provide both structural and functional links between its individual cells. Three types of cell junctions are found in the epithelium and other tissues. These are called as tight, adhering and gap junctions. Tight junctions help to stop substances from leaking across a tissue. Adhering junctions perform cementing to keep neighbouring cells together. Gap junctions facilitate the cells to communicate with each other by connecting the cytoplasm of adjoining cells, for rapid transfer of ions, small molecules andsometimes big molecules.