Epilepsy (also called “seizures”) is characterized by uncontrolled excessive activity of either part or all of the central nervous system.

Epilepsy (also called “seizures”) is characterized by uncontrolled excessive activity of either part or all of the central nervous system.

A person who is predisposed to epilepsy has attacks when the basal level of excitability of the nervous system (or of the part that is susceptible to the epileptic state) rises above a certain critical threshold. As long as the degree of excitability is held below this threshold, no attack occurs.

Grand mal epilepsy is characterized by extreme neu-ronal discharges in all areas of the brain—in the cere-bral cortex, in the deeper parts of the cerebrum, and even in the brain stem. Also, discharges transmitted all the way into the spinal cord sometimes cause general-ized tonic seizures of the entire body, followed toward the end of the attack by alternating tonic and spasmodic muscle contractions called tonic-clonic seizures. Often the person bites or “swallows” his or her tongue and may have difficulty breathing, sometimes to the extent that cyanosis occurs. Also, signals transmitted from the brain to the viscera frequently cause urination and defe-cation.

The usual grand mal seizure lasts from a few seconds to 3 to 4 minutes. It is also characterized by postseizuredepression of the entire nervous system; the personremains in stupor for 1 to many minutes after the seizure attack is over, and then often remains severely fatigued and asleep for hours thereafter.

The top recording of Figure 59–5 shows a typical EEG from almost any region of the cortex during the tonic phase of a grand mal attack. This demonstrates that high-voltage, high-frequency discharges occur over the entire cortex. Furthermore, the same type of dis-charge occurs on both sides of the brain at the same time, demonstrating that the abnormal neuronal cir-cuitry responsible for the attack strongly involves the basal regions of the brain that drive the two halves of the cerebrum simultaneously. 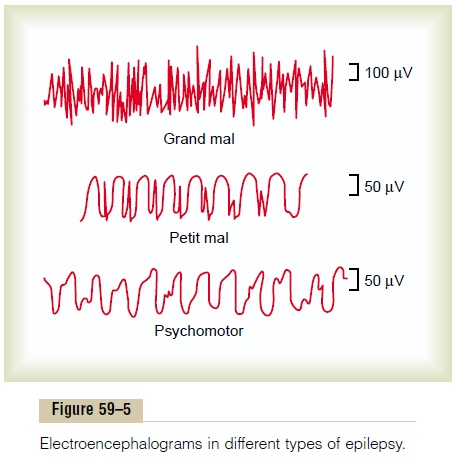 In laboratory animals and even in human beings, grand mal attacks can be initiated by administering a neuronal stimulant such as the drug pentylenetetrazol, or they can be caused by insulin hypoglycemia, or by passage of alternating electrical current directly through the brain. Electrical recordings from the thalamus as well as from the reticular formation of the brain stem during the grand mal attack show typical high-voltage activity in both of these areas similar to that recorded from the cerebral cortex. Presumably, therefore, a grand mal attack involves not only abnormal activation of the thalamus and cerebral cortex but also abnormal activa-tion in the subthalamic brain stem portions of the brain activating system itself.

What Initiates a Grand Mal Attack? Most people who havegrand mal attacks have hereditary predisposition to epilepsy, a predisposition that occurs in about 1 of every 50 to 100 persons. In such people, factors that can increase the excitability of the abnormal “epilepto-genic” circuitry enough to precipitate attacks include (1) strong emotional stimuli, (2) alkalosis caused by overbreathing, (3) drugs, (4) fever, and (5) loud noises or flashing lights.

Even in people who are not genetically predisposed, certain types of traumatic lesions in almost any part of the brain can cause excess excitability of local brain areas, as we discuss shortly; these, too, sometimes trans-mit signals into the activating systems of the brain to elicit grand mal seizures.

What Stops the Grand Mal Attack? The cause of the extremeneuronal overactivity during a grand mal attack is pre-sumed to be massive simultaneous activation of many reverberating neuronal pathways throughout the brain. Presumably, the major factor that stops the attack after a few minutes isneuronal fatigue. A second factor is probably active inhibition by inhibitory neurons that have been activated by the attack.

Petit mal epilepsy almost certainly involves the thala-mocortical brain activating system. It is usually charac-terized by 3 to 30 seconds of unconsciousness (or diminished consciousness) during which time the person has twitch-like contractions of muscles usually in the head region, especially blinking of the eyes; this is followed by return of consciousness and resumption of previous activities. This total sequence is called theabsence syndrome or absence epilepsy. The patientmay have one such attack in many months or, in rare instances, may have a rapid series of attacks, one after the other. The usual course is for the petit mal attacks to appear first during late childhood and then to disap-pear by the age of 30. On occasion, a petit mal epilep-tic attack will initiate a grand mal attack.

The brain wave pattern in petit mal epilepsy is demonstrated by the middle recording of Figure 59–5, which is typified by a spike and dome pattern.The spike and dome can be recorded over most or all of the cere-bral cortex, showing that the seizure involves much or most of the thalamocortical activating system of the brain. In fact, animal studies suggest that it results from oscillation of (1) inhibitory thalamic reticular neurons (which areinhibitory gamma-aminobutyric acid [GABA]–producing neurons) and (2) excitatory thalamocortical and corticothalamic neurons.

Focal epilepsy can involve almost any local part of the brain, either localized regions of the cerebral cortex or deeper structures of both the cerebrum and brain stem. Most often, focal epilepsy results from some localized organic lesion or functional abnormality, such as (1) scar tissue in the brain that pulls on the adjacent neuronal tissue, (2) a tumor that compresses an area of the brain, (3) a destroyed area of brain tissue, or (4) congenitally deranged local circuitry.

Lesions such as these can promote extremely rapid discharges in the local neurons; when the discharge rate rises above several hundred per second, synchronous waves begin to spread over adjacent cortical regions. These waves presumably result from localized reverber-ating circuits that gradually recruit adjacent areas of thecortex into the epileptic discharge zone. The process spreads to adjacent areas at a rate as slow as a few mil-limeters a minute to as fast as several centimeters per second.When such a wave of excitation spreads over the motor cortex, it causes progressive “march” of muscle contractions throughout the opposite side of the body, beginning most characteristically in the mouth region and marching progressively downward to the legs but at other times marching in the opposite direction. This is called jacksonian epilepsy.

Another type of focal epilepsy is the so-called psy-chomotor seizure, which may cause (1) a short period ofamnesia; (2) an attack of abnormal rage; (3) sudden anxiety, discomfort, or fear; and/or (4) a moment of incoherent speech or mumbling of some trite phrase. Sometimes the person cannot remember his or her activities during the attack, but at other times, he or she is conscious of everything that he or she is doing but unable to control it. Attacks of this type frequently involve part of the limbic portion of the brain, such as the hippocampus, the amygdala, the septum, and/or por-tions of the temporal cortex.

The lowest tracing of Figure 59–5 demonstrates a typical EEG during a psychomotor seizure, showing a low-frequency rectangular wave with a frequency between 2 and 4 per second and with occasional super-imposed 14-per-second waves.

The EEG can be used to localize abnormal spiking waves originating in areas of organic brain disease that predispose to focal epileptic attacks. Once such a focal point is found, surgical excision of the focus frequently prevents future attacks.