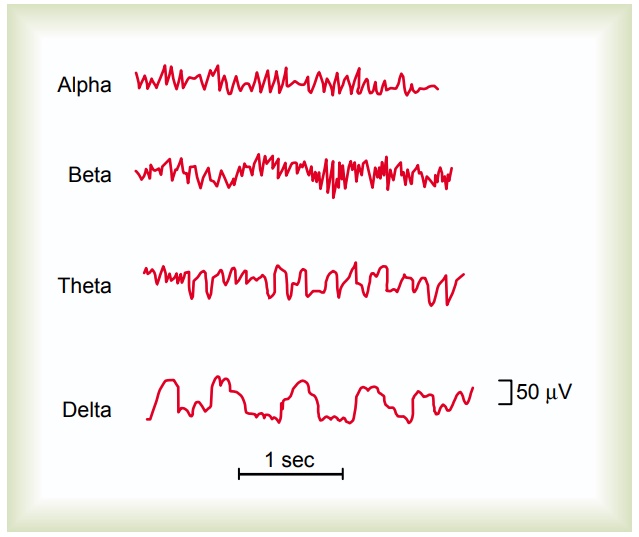 Electrical recordings from the surface of the brain or even from the outer surface of the head demonstrate that there is continuous electrical activity in the brain. Both the intensity and the patterns of this electrical activity are determined by the level of excitation of dif-ferent parts of the brain resulting from sleep, wakeful-ness, or brain diseases such as epilepsy or even psychoses. The undulations in the recorded electricalpotentials, shown in Figure 59–1, are called brain waves, and the entire record is called an EEG (electroen-cephalogram). 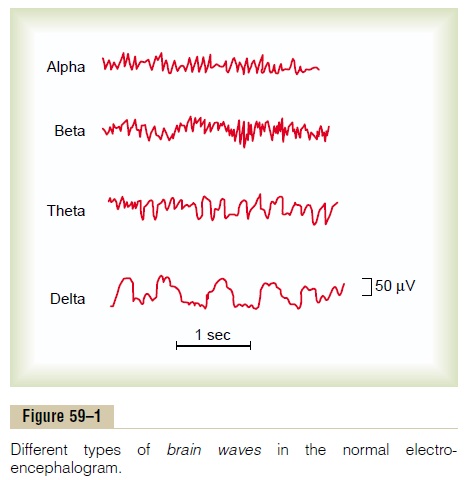 The intensities of brain waves recorded from the surface of the scalp range from 0 to 200 microvolts, and their frequencies range from once every few seconds to 50 or more per second. The character of the waves is dependent on the degree of activity in respective parts of the cerebral cortex, and the waves change markedly between the states of wakefulness and sleep and coma.

Much of the time, the brain waves are irregular, and no specific pattern can be discerned in the EEG. At other times, distinct patterns do appear, some of which are characteristic of specific abnormalities of the brain such as epilepsy, which is discussed later.

In normal healthy people, most waves in the EEG can be classified as alpha, beta, theta, and delta waves, which are shown in Figure 59–1.

Alpha waves are rhythmical waves that occur at fre-quencies between 8 and 13 cycles per second and are found in the EEGs of almost all normal adult people when they are awake and in a quiet, resting state of cerebration. These waves occur most intensely in the oc-cipital region but can also be recorded from the parietal and frontal regions of the scalp. Their voltage usually is about 50 microvolts. During deep sleep, the alpha waves disappear. 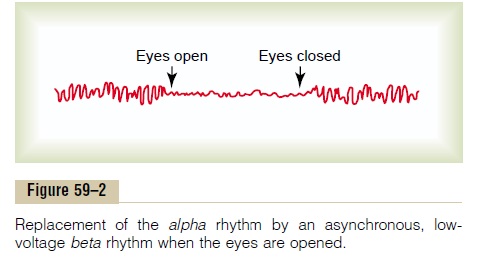 Beta waves occur at frequencies greater than 14 cyclesper second and as high as 80 cycles per second. They are recorded mainly from the parietal and frontal regions during specific activation of these parts of the brain.

Theta waves have frequencies between 4 and 7 cyclesper second. They occur normally in the parietal and temporal regions in children, but they also occur during emotional stress in some adults, particularly during dis-appointment and frustration. Theta waves also occur in many brain disorders, often in degenerative brain states.

Delta waves include all the waves of the EEG withfrequencies less than 3.5 cycles per second, and they often have voltages two to four times greater than most other types of brain waves. They occur in very deep sleep, in infancy, and in serious organic brain disease. They also occur in the cortex of animals that have had subcortical transections separating the cerebral cortex from the thalamus. Therefore, delta waves can occur strictly in the cortex independent of activities in lower regions of the brain.

The discharge of a single neuron or single nerve fiber in the brain can never be recorded from the surface of the head. Instead, many thousands or even millions of neurons or fibers must fire synchronously; only then will the potentials from the individual neurons or fibers summate enough to be recorded all the way through the skull. Thus, the intensity of the brain waves from the scalp is determined mainly by the numbers of neurons and fibers that fire in synchrony with one another, not by the total level of electrical activity in the brain. In fact, strong nonsynchronous nerve signals often nullify one another in the recorded brain waves because of opposing polarities. This is demonstrated in Figure 59–2, which shows, when the eyes were closed, synchronous discharge of many neurons in the cerebral cortex at a frequency of about 12 per second, thus causing alphawaves. Then, when the eyes were opened, the activity ofthe brain increased greatly, but synchronization of the signals became so little that the brain waves mainly nul-lified one another, and the resultant effect was very low voltage waves of generally high but irregular frequency, the beta waves.

Origin of Alpha Waves. Alpha waves willnotoccur in thecerebral cortex without cortical connections with the thalamus. Conversely, stimulation in the nonspecific layer of reticular nuclei that surround the thalamus or in “diffuse” nuclei deep inside the thalamus often sets up electrical waves in the thalamocortical system at a frequency between 8 and 13 per second, which is the natural frequency of the alpha waves. Therefore, it is believed that the alpha waves result from spontaneous feedback oscillation in this diffuse thalamocortical system, possibly including the reticular activating system in the brain stem as well. This oscillation pre-sumably causes both the periodicity of the alpha waves and the synchronous activation of literally millions of cortical neurons during each wave.

Origin of Delta Waves. Transection of the fiber tracts fromthe thalamus to the cerebral cortex, which blocks thal-amic activation of the cortex and thereby eliminates the alpha waves, nevertheless does not block delta waves in the cortex.This indicates that some synchronizing mech-anism can occur in the cortical neuronal system by itself—mainly independent of lower structures in the brain—to cause the delta waves.

Delta waves also occur during deep slow-wave sleep; this suggests that the cortex then is mainly released from the activating influences of the thalamus and other lower centers.

There is a general correlation between level of cerebral activity and average frequency of the EEG rhythm, the average frequency increasing progressively with higher degrees of activity. This is demonstrated in Figure 59–3, which shows the existence of delta waves in stupor, surgical anesthesia, and deep sleep; theta waves in psychomotor states and in infants; alpha waves during relaxed states; and beta waves during periods of intense mental activity. During periods of mental activity, thewaves usually become asynchronous rather than syn-chronous, so that the voltage falls considerably, despite markedly increased cortical activity, as shown in Figure 59–2. 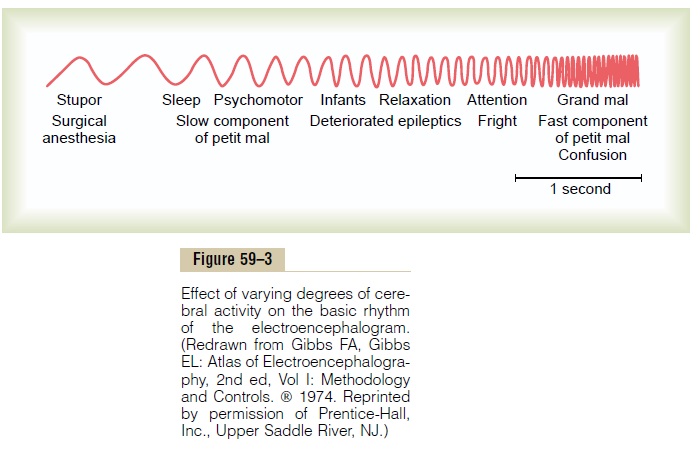 Changes in the EEG at Different Stages of Wakefulness and Sleep

Figure 59–4 shows EEG patterns from a typical person in different stages of wakefulness and sleep. Alert wake-fulness is characterized by high-frequency beta waves, whereas quiet wakefulness is usually associated with alpha waves, as demonstrated by the first two EEGs ofthe figure.

Slow-wave sleep is divided into four stages. In the first stage, a stage of very light sleep, the voltage of the EEG waves becomes very low; this is broken by “sleep spin-dles,” that is, short spindle-shaped bursts of alpha wavesthat occur periodically. In stages 2, 3, and 4 of slow-wave sleep, the frequency of the EEG becomes progressively slower until it reaches a frequency of only 1 to 3 waves per second in stage 4; these are delta waves. 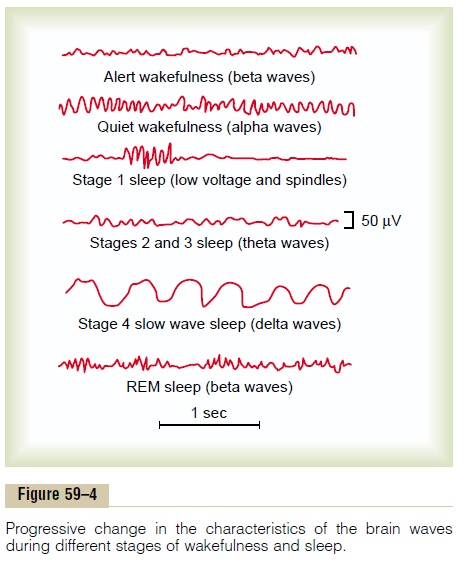 Finally, the bottom record in Figure 59–4 shows the EEG during REM sleep. It is often difficult to tell the difference between this brain wave pattern and that of an awake, active person. The waves are irregular and high-frequency, which are normally suggestive of desyn-chronized nervous activity as found in the awake state. Therefore, REM sleep is frequently called desynchro-nized sleep because there is lack of synchrony in thefiring of the neurons, despite significant brain activity.