Plague is worldwide in distribution with most of the human cases reported from developing countries.

Plague is worldwide in distribution with most of the human cases reported from developing countries.

Most cases of plague occur in the developing countries of Africa and Asia, including Vietnam and India. India is one of the few countries that have been worst hit by the pandemics of plague. Plague first appeared in Bombay in 1896 and spread all over the country, causing more than 10 million deaths by 1918. Thereafter, it gradually receded, though occasional cases continued to occur in endemic foci till 1967.

In India, at least four natural foci of plague are known, which have contributed to survival of the plague bacilli. These include

·           The place near Kolar at the tri junction of Tamil Nadu, Andhra Pradesh, and Karnataka;

·           Beed-Latur belt in Maharashtra from where the Surat epi-demic started;

Plague is a zoonotic infection transmitted to humans by the bite of an infected rat flea. Infection may also be transferred by contamination of the bite wound with the feces of infected rat fleas. Human-to-human transmission is rare except during epidemics of pneumonic plague. There are two natural cycles of plague: the urban plague and the wild plague (Fig. 34-1). 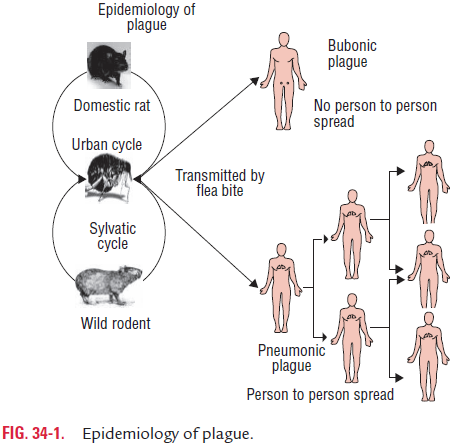 Urban or domestic plague: Urban plague is maintained in ratpopulations and is transmitted among rats or between rats and humans by infected rat fleas. In India during earlier years, plague produced epizootics first in sewer rat, Rattus norvegicus. When their number decreased, the disease spread to the domestic rat, Rattus rattus. Domestic rat is the important reservoir of urbanplague from which the infection spreads to human beings. The rat flea is the usual vector. Thirty different flea species have been identified as vectors, the most important being X enopsylla cheopis, enopsylla astia, and Ceratophyllus fasciatus.X. cheopis is the predomi-nant species in north India, while X. astia is in the south India.

Cool and humid seasons favor the multiplication of fleas, leading to a high “flea index” (mean number of fleas per rat). Hence, plague epidemics occur during the cold season more frequently than in the hot, dry weather, in which fleas do not thrive and the transmission of infection is interrupted.

Wild or sylvatic plague: This occurs between animals andwild rodents independent of human beings. More than 200 different animal species have been identified as hosts. These include domestic cats and dogs, squirrels, chipmunks, mar-mots, deer mice, rabbits, hares, rock squirrels, camels, and sheep. In India, the gerbil (Tatera indica) and the bandicoot are reservoirs for sylvatic plague.

In enzootic foci, infected fleas may survive for over a year. The bacilli remain alive and even multiply in the soil of unused rodent burrows. Plague bacilli infect new rodents that live in such burrows. This contributes for the long period of quies-cence and subsequent reemergence of plague.

Sylvatic plague is difficult to eliminate because the mammalian reservoirs and flea vectors are widespread. Human-to-human spread occurs only in pneumonic plague. Pneumonic plague is spread by droplet infection and may be seen during epidemics of bubonic plague. Rarely, primary pneumonic plague may occur in epidemic form, as observed in Manchuria during 1910–1912, causing nearly 60,000 deaths.