Hydrogen atoms attached to a carbon are not usually acidic, but if the carbon is next to a carbonyl group, any attached α protons are potentially acidic.

Hydrogen atoms attached to a carbon are not usually acidic, but if the carbon is next to a carbonyl group, any attached α protons are potentially acidic.

The negative charge resulting from loss of anα proton can be stabilized by a resonance process which places it onto an electronegative oxygen atom. The ion formed is called an enolate ion.

The mechanism is a concerted process whereby the acidic proton is lost at the same time as the C=C double bond is formed and the C=O π bond is broken. The electronegative carbonyl oxygen is the reason why the α pro-ton is acidic.

The enolate ion is a hybrid of two resonance structures where the negative charge is delocalized over three sp2 hybridized atoms. Orbital diagrams can be used to predict whether an acidic proton is in the correct orientation to be lost.

Most acidic protons are attached to heteroatoms such as halogen, oxygen, and nitrogen. Protons attached to carbon are not normally acidic but there are excep- tions. One such exception occurs with aldehydes or ketones when there is a CHR2, CH2R or CH3 group next to the carbonyl group (Fig. 1). The protons indicated areacidic and are attached to what is known as the α (alpha) carbon. They are there-fore termed as α protons. 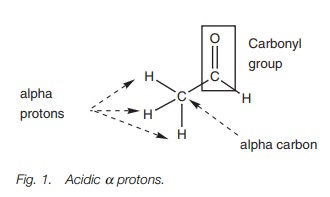 Treatment with a base results in loss of one of the acidic α protons (Fig. 2). 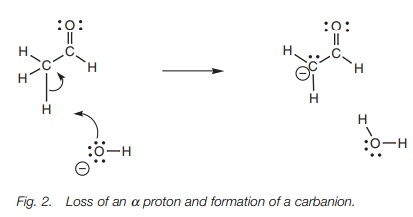 A lone pair on the hydroxide oxygen forms a new bond to anα proton. At the same time as this happens, the C–H bond breaks. Both electrons of that bond end up on the carbon atom and give it a lone pair of electrons and a negative charge (a carbanion). However, carbanions are usually very reactive, unstable species which are not easily formed. Therefore, some form of stabilization is involved here.

Since carbon is not electronegative, it cannot stabilize the charge. However, stabilization is possible through resonance (Fig. 3). The lone pair of electrons on the carbanion form a new π bond to the carbonyl carbon. As this bond is formed, the weak π bond of the carbonyl group breaks and both these electrons move onto the oxygen. This results in the negative charge ending up on the electronegative oxygen where it is more stable. This mechanism is exactly the same as the one described for the carboxylate ion. However, whereas both resonance structures are equally stable in the carboxylate ion, this is not the case here. The resonance structure having the charge on the oxygen atom (an enolate ion) is more stable than the original carbanion resonance structure. Therefore, the enolate ion will predominate over the carbanion.

Since the enolate ion is the preferred resonance structure, a better mechanism for the acid base reaction shows the enolate ion being formed at the same time as the acidic proton is lost (Fig. 4). As the hydroxide ion forms its bond to the acidic proton, the C–H bond breaks, and the electrons in that bond form a π bond to the carbonyl carbon atom. At the same time, the carbonyl π  bond breaks such that both electrons move onto the oxygen. Note that it is the electronegative oxygen which is responsible for making the α proton acidic.

Resonance structures represent the extreme possibilities for a particular molecule and the true structure is really a hybrid of both (Fig. 5). The ‘hybrid’ structure shows that the negative charge is ‘smeared’ or delocalized between three sp2 hybridized atoms. Since these atoms are sp2 hybridized, they are planar and have a 2p orbital which can interact with its neighbors to form one molecular orbital, thus spreading the charge between the three atoms (Fig. 6). 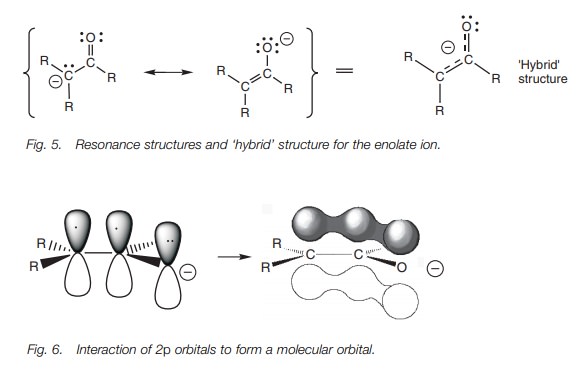 Bearing this in mind, it is possible to state which of the methyl hydrogens is most likely to be lost in the formation of an enolate ion. The hydrogen circled (Fig. 7a) is the one which will be lost since the σ C–H bond is correctly orientated to interact with the π orbital of the carbonyl bond. The orbital diagram (Fig. 7b) illustrates this interaction. A Newman diagram can also be drawn by looking along the C–C bond to indicate the relative orientation of the α hydrogen which will be lost (Fig. 7c). In this particular example, there is no difficulty in the proton being in the correct orientation since there is free rotation around the C–C single bond. However, in cyclic systems, the hydrogen atoms are locked in space and the relative stereochemistry is important if the α proton is to be acidic.

Enolate ions formed from ketones or aldehydes are extremely important in the synthesis of more complex organic molecules. The ease with which an enolate ion is formed is related to the acidity of the α proton. The pKa of propanone (acetone) is = 19.3 which means that it is a stronger acid compared to ethane (pKa = 60) and a much weaker acid than acetic acid (pKa 4.7). This means that strong bases such as sodium hydride, sodium amide, and lithium diiso-propylamide (LiN(i-C3H7)2) are required to form an enolate ion.

However, the acidity of the α proton is increased if it is flanked by two car-bonyl groups rather than one, for example, 1,3-diketones (β-diketones) or 1,3-diesters (β-keto esters). This is because the negative charge of the enolate ion can be stabilized by both carbonyl groups resulting in three resonance structures (Fig. 8). For example, the pKa of 2,4-pentanedione is 9. 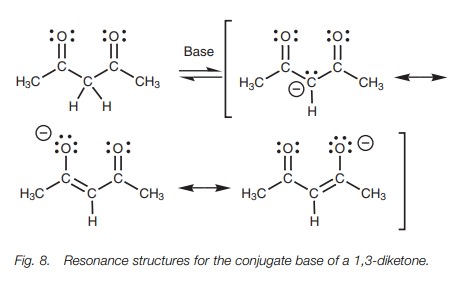