To date, there are chemicals, including xenobiotics, which still resist degradation in the environment.

To date, there are chemicals, including xenobiotics, which still resist degradation in the environment. This may be due to a dearth, at the site of contamination, of organisms able to degrade them fully or worse, microbial activity which changes them in such a way that they pose a bigger problem than they did previously. One such example is taken from synthetic oestrogens such as 17α-ethinyloestradiol commonly forming the active ingredient of the birth control pills, and the nat-ural oestrogens which, of course, are not xenobiotics. Natural oestrogens are deactivated in humans by glucuronidation, as shown in Figure 3.1, which is a conjugation of the hormone with UDP-glucuronate making the compound more 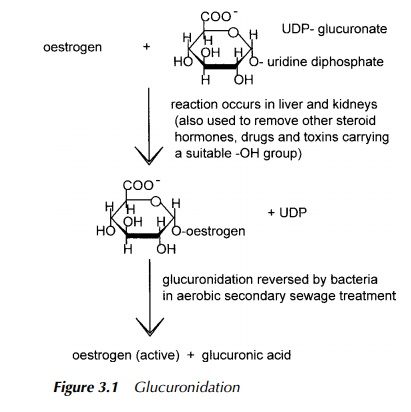 polar and easily cleared from the blood by the kidneys. It is in this modified and inactive form that it is excreted into the sewage. However, bacteria present in the aerobic secondary treatment in sewage treatment plants, have the enzyme,-glucuronidase, which removes this modification thus reactivating the hormone.

As an aside, glucuronidation is not confined to hormones but is a process used to detoxify a number of drugs, toxins and carcinogens in the liver. The enzyme catalysing this process is induced in response to prolonged exposure to the toxin thus imparting increased tolerance or even resistance to the chemical.

Returning to the problem of elevated levels of active hormones in the water-ways, another aspect is that steroids do not occur in bacteria, although they are present in fungi, and so bacteria lack the necessary pathways to allow com-plete degradation of these hormones at a rate compatible with the dwell time in sewage treatment plants. The consequence has been raised levels of reactivated oestrogen and 17α-ethinyloestradiol in the waterways leading to disturbances of the endocrine, or hormonal, system in fauna downstream from sewage treat-ment plants. Such disturbances have been monitored by measuring the presence of the protein vitellogenin (Sole et al. 2001) which is a precursor to egg yolk protein, the results of which have indicated feminisation of male fish in many species including minnows, trout and flounders. The source of environmental oestrogens is not confined to outfall from sewage treatment plants, however, the fate of endocrine disrupters, examples of which are given in Figure 3.2, in sewage treatment plants is the subject of much research (Byrns 2001). Many other chemicals, including polyaromatic hydrocarbons (PAHs), dichlorodiphenyl-trichloroethane (DDT), alkyl phenols and some detergents may also mimic the activity of oestrogen. There is general concern as to the ability of some organisms to accumulate these endocrine disrupters in addition to the alarm being raised as to the accumulative effects on humans of oestrogen-like activity from a number of xenobiotic sources. 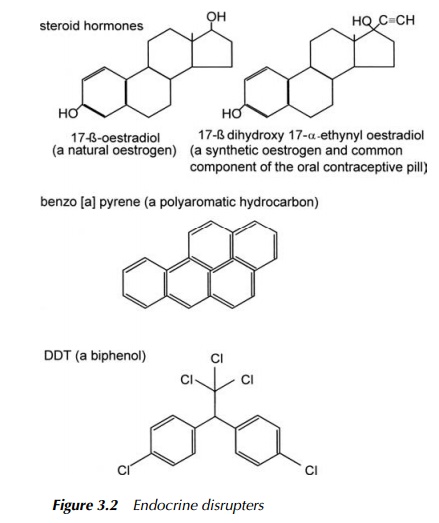 To date there is no absolute evidence of risk to human health but the Environ-mental Agency and Water UK are recommending the monitoring of environmen-tal oestrogens in sewage treatment outfall. Assays are being developed further to make these assessments (Gutendorf and Westendorf 2001) and to predict poten-tial endocrine disrupter activity of suspected compounds (Takeyoshi et al 2002). Oestrogen and progesterone are both heat labile. In addition, oestrogen appears to be susceptible to treatment with ultra-violet light, the effects of which are augmented by titanium dioxide (Eggins 1999). The oestrogen is degraded com-pletely to carbon dioxide and water thus presenting a plausible method for water polishing prior to consumption.

Another method for the removal of oestrogens from water, in this case involv-ing Aspergillus, has also been proposed (Ridgeway and Wiseman 1998). Sulpha-tion of the molecule by isolated mammalian enzymes, as a means of hormone inactivation is also being investigated (Suiko 2000). Taken overall, it seems unlikely that elevated levels of oestrogen in the waterways will pose a problem to human health in drinking water although, this does not address the problem affecting hormone-susceptible organisms living in contaminated water and thus exposed to this potential hazard.