Encopresis is usually defined as the intentional or involuntary passage of stool into inappropriate places in the absence of any identified physical abnormality in children older than 4 years.

Encopresis is usually defined as the intentional or involuntary passage of stool into inappropriate places in the absence of any identified physical abnormality in children older than 4 years. It may not be attributable to a medical condition and must occur at least monthly for a period of three months. The distinction is drawn between encopresis with constipation (retention with over-flow based on history or physical examination) and encopresis without constipation. Other classification schemes include mak-ing a primary–secondary distinction (based on having a 1-year period of continence) or soiling with fluid or normal feces.

Less than one-third of children in the USA have completed toilet training by the age of 2 years with a mean age of 27.7 months. Bowel control is usually achieved before bladder control.

The age cutoff for “normality” is set at 4 years, the age at which 95% of children have acquired fecal continence (Stein and Susser, 1967). As with urinary continence, girls achieve bowel control earlier than boys.

The overall prevalence of encopresis in 7- and 8-year-old children has been shown to be 1.5%, with boys (2.3%) affected more com-monly than girls (0.7%). There was a steadily rising likelihood of continence with increasing age, until by age 16 years the re-ported prevalence was almost zero. Rutter and coworkers (1970) reported a rate of 1% in 10- to 12-year-old children, with a strong (5 : 1) male/female ratio. Retrospective study of clinic-referred en-copretic children has shown that 40% of cases are primary (true failure to gain control), with a mean age of 6.7 years, and 60% of cases are secondary, with a mean age of 8 years (Levine, 1975). Eighty percent of patients were constipated, with no difference in this feature seen between primary and secondary subtypes. 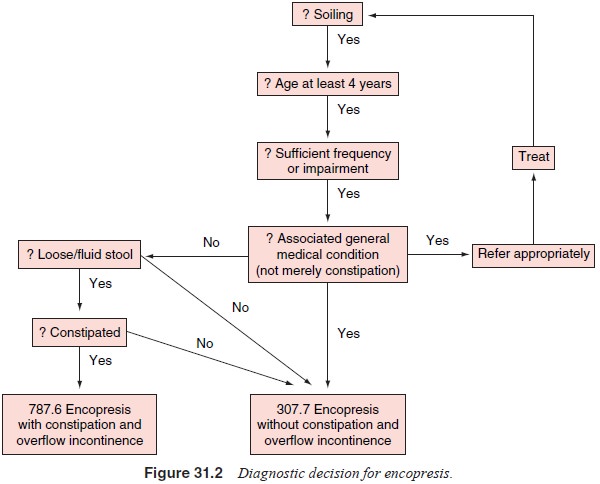 In the first group, in which bowel control has been established, the stool may be soft or normal (but different from fluid-type feces seen in overflow). Soiling due to acute stress events (e.g., the birth of a sibling, a change of school, or parental separation) is usually brief once the stress has abated, given a stable home environment and sensible management. In more severe patho-logical family situations, including punitive management or frank physical or sexual abuse (Boon, 1991), the feces may be deposited in places deliberately to cause anger or irritation, or there may be associated smearing of feces on furniture and walls. Other covert aggressive antisocial acts may be evident, with considerable denial by the child of the magnitude or seri-ousness of the problem.

In the second group, in which there is failure to learn bowel control, a nonfluid stool is deposited fairly randomly in clothes, at home and at school. There may be conditions such as mental retardation or specific developmental delay, spina bifida, or cerebral palsy that impair the ability to recognize the need to defecate and the appropriate skills needed to defer this function until a socially appropriate time and location. In the absence of low IQ or pathological physical condition, patients have been re-ported as having associated enuresis, academic skills problems and antisocial behavior. They present to pediatricians primarily and are usually younger (age 4–6 years) than other encopretic individuals. It is thought that this type of soiling is considerably more common in socially disadvantaged, disorganized families because of stressful, faulty or inconsistent training.

In the third group, excessively fluid feces are passed, which may result from conditions that cause true diarrhea (e.g., ulcera-tive colitis) or, much more frequently, from constipation with overflow causing spurious diarrhea. A history of retention, either willful or in response to pain, is prominent in the early days of this form of encopresis, although later it may be less apparent be-cause of fecal overflow. Behavior such as squatting on the heels to prevent defecation or marked anxiety about the prospect of using the toilet (although rarely amounting to true phobic avoid-ance) may be described.

The comprehensive assessment process should include a medical evaluation, psychiatric and family interviews, and a systematic behavioral recording.

The medical evaluation comprises a history, review of systems, physical examination, and appropriate hematological and radiological tests. Although the vast majority of patients with encopresis are medically normal, a small proportion have pathological features of etiological significance. Physical causes of encopresis without retention include inflammatory bowel dis-ease (e.g., ulcerative colitis, Crohn’s disease), central nervous system disorders, sensory disorders of the anorectal region or pelvic floor muscles (e.g., spina bifida, cerebral palsy). Organic causes of encopresis with retention include Hirschsprung’s dis-ease (aganglionosis in intermuscular and submucous plexuses of the large bowel extending proximally from the anus), neurogenic megacolon, hypothyroidism, hypercalcemia, chronic codeine or laxative usage, anorectal stenosis and fissure. It should also be remembered that these conditions rarely have their first presenta-tion with encopresis alone.

The physical assessment should include an abdominal and rectal examination, although a plain abdominal radiograph is the most reliable way to determine the presence of fecal impaction. Anorectal manometry should be considered in the investigation of children with severe constipation and chronic soiling, espe-cially those in whom Hirschsprung’s disease is suspected.

Psychiatric and family interviews should include a devel-opmental history and a behavioral history of encopresis (ante-cedents, behavior and consequences). Specific areas of stress, acute or chronic, affecting the child or family, or both, should be discovered. Associated psychopathological conditions are more commonly found in the older child, in secondary encopresis, and when soiling occurs not only in clothes. Anxiety surrounding toileting may indicate pot phobia, coercive toileting, or a his-tory of painful defecation. A history should be obtained of the parents’ previous attempts at treatment together with previously prescribed therapy so that reasons for previous failure can be identified and anticipated in future treatment planning.

Practical management for encopresis is presented in Table 31.3.

The principal approach to treatment is predicated on the results of the evaluation and the clinical category assigned. This differenti-ates between the need to establish a regular toileting procedure in patients in whom there has been a failure to learn this social behavior and the need to address a psychiatric disorder, par-ent–child relationship difficulties, or other stresses in the child who exhibits loss of this previously acquired skill in association with these factors. In both cases, analysis of the soiling behavior may identify reinforcing factors important in maintaining dys-function. Detection of significant constipation will, in addition, provide an indication for adjuvant laxative therapy.

Behavioral therapy is the mainstay of treatment for encopresis. In the younger child who has been toilet trained, this focuses on practical elimination skills, for example, visiting the toilet after each meal, staying there for a maximum of 15 minutes, using muscles to increase intra-abdominal pressure and cleaning one-self adequately afterward. Parents or caretakers, or both, need to be educated in making the toilet a pleasant place to visit and should stay with the younger child, giving encouragement and praise for appropriate effort. Small children whose legs may dangle above the floor should be provided with a step against which to brace when straining. Initially, a warm bath before us-ing the toilet may relax the anxious child and make it easier to pass stool. Systematic recording of positive toileting behavior, not necessarily being clean (depending on the level of baseline behavior), should be performed with a personal star chart. For the child with severe anxiety about sitting on the toilet, a graded exposure scheme may be indicated.

Role of the Family in Treatment

Removing the child’s and family’s attention from the encopresis alone and focusing onto noticing, recording and rewarding positive behavior often defuses tension and hostility and provides the opportunity for therapeutic improvement. Identifying and eliminating sources of secondary gain, whereby soiling is reinforced by parental (or other individuals’) actions and attention, even if negative or punitive, make positive efforts more fruitful. Some investigators advocate mild punishment techniques, such as requiring the child to clean his or her own clothes after soiling, although care must be taken to prevent this from becoming too punitive. In certain settings, particularly school, attempts are made to prevent soiling by extremely frequent toileting that, although keeping the child clean, does not promote and may even hinder the acquisition of a regular bowel habit. Formal therapy, either individual or family based, is indicated in only a minority of patients with an associated psychiatric disorder, marked behavioral disturbance, or clear remediable family or social stresses.

In patients with retention leading to constipation and overflow, medical management is nearly always required, although it is usually with oral laxatives or microenemas alone. The use of more intrusive and invasive colonic and rectal washout or sur-gical disimpaction procedures is nearly always the result of the clinician’s impatience rather than true clinical need.

Uncontrolled studies of combined treatment with behav-ioral therapy and laxatives reported marked improvement in symptoms (not cure) in approximately 70 to 80% of patients. A more recent controlled randomized trial (Nolan et al., 1991) com-paring behavioral therapy in retentive primary encopresis with and without laxatives showed that at 12-month follow-up, 51% of the combined treatment (laxative plus behavioral therapy) group had achieved remission (at least one 4-week period with no soil-ing episodes), compared with 36% of the behavioral therapy only group (P 5 0.08). Partial remission (soiling no more than once a week) was achieved in 63% of patients with combined therapy versus 43% with behavioral therapy alone (P 5 0.02). Patients receiving laxatives achieved remission significantly sooner, and the difference in the Kaplan–Meier remission curves was most striking in the first 30 weeks of follow-up (P 5 0.012). When patients who were not compliant with the toileting program were removed from the analysis, however, the advantage of combined therapy was not significant. These results must also be viewed in light of a 50% spontaneous remission rate at 2 years reported in some studies.