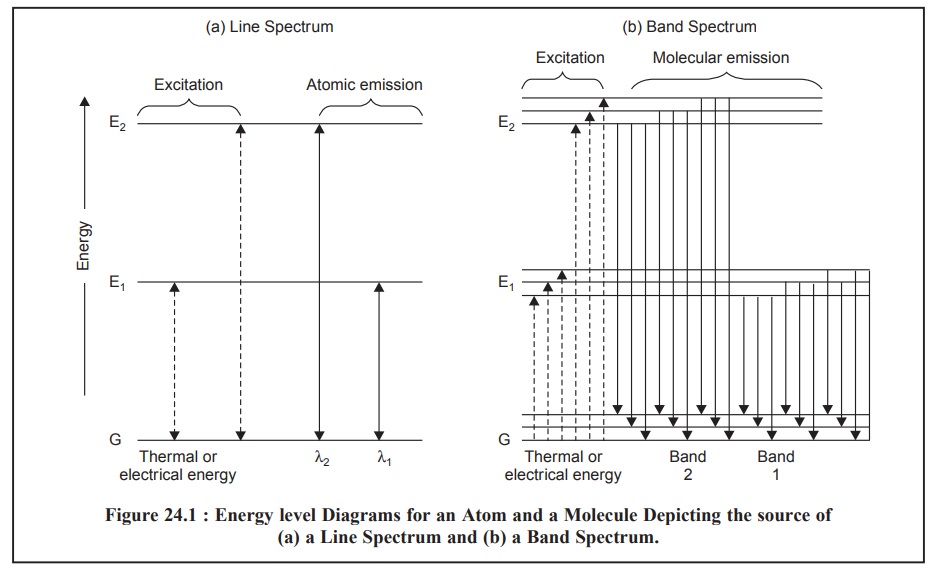 The theoretical aspects of emission spectroscopy may be categorized into the following four heads, namely :

The theoretical aspects of emission spectroscopy may be categorized into the following four heads, namely :

A beam of light on being passed either through a Nicol’s prism or a grating, is split-up right into its constituent array of colours frequently termed as spectrum. However, the complete spectrum has a wide range that may be further divided into various regions based on their respective wavelengths (0 to 35,000° A) :

(i) Ultraviolet Region : It embraces radiations of wavelengths between 0 to 4000° A,

(b) Classes of Spectra :

There exist, in fact, two major types of spectra commonly termed as emission spectra and the absorption spectra which shall be discussed briefly as follows below :

(i) Emission Spectra : An element on being heated to a very high temperature either by electri-cal method or a thermal method-usually emits light. This particular light after passing through either a prism or a grating when studied directly with the help of a spectroscope, gives rise to a spectrum, that is termed as emission spectrum.

(ii) Absorption Spectra : A source of light emits a continuous spectrum when first made to pass through an absorbing substance and subsequently through a spectroscope. It has been noticed that a few lines are missing in the observed spectrum thereby leaving either dark bands or lines at their respective places. Because the light of wavelength exactly corresponding to these dark bands (or lines) is found to be absorbed by the substance through which light is passed, the resulting spectrum is called as an absorption spectrum.

The emission spectra may be classified into the following three types, namely :

(i) Band Spectra (or Molecular Spectrum) : Each molecule upon excitation gives out a band spectrum (or bands) that are characteristics of the molecule. In fact, a band spectrum com-prises of groups of lines so near to one another that under normal circumstances they more or less seem to appear as continuous bands.

However, in emission spectroscopy the band spectra provided by molecules may be elimi-nated completely by giving energy to the corresponding molecules so that they may be split-up into separate atoms.

(ii) Continuous Spectra : A continuous emission spectrum is obtained when solids are heated to incandescence. The thermal radiation of this nature is termed as black-body radiation, which has the following three characteristic features, namely :

(a) Dependent more on the temperature of the emitting surface than the material of which the surface is made of,

(b) Caused by the innumerable atomic and molecular oscillations excited in the condensed solid by the thermal energy, and

(c) Independent of the chemical composition of the substance.

Example : Incandescent solids, e.g., carbon and iron give rise to continuous emission spectra when they are heated until they glow.

Hence, it is pertinent to mention here that the continuous spectrum cannot be employed effectively for spectrochemical analysis and these spectra may be eliminated completely by volatalizing the material (sam-ple) before excitation.

(iii) Line Spectra : Line spectra are usually encountered when the light emitting substance i.e., the radiating species are separate atomic entities (particles) which are distinctly separated from one another, as in gas. Therefore, it is invariably known as ‘atomic spectrum’. As the line spectrum depends solely upon the type of an atom, hence it enjoys the status of a predominant type of emission spectroscopy.

Bohr’s theory rightly explains the fundamental origin of ‘line spectrum’ according to which :

·              An atom in the ground state has its electrons present in the lowest permitted energy-levels,

·              An excited atom (by thermal or electrical means) has its electrons migrate from inner orbitals (specifically valence electrons) to outer orbitals,

·              The excited electrons quickly give a photon of energy of immediately take the position in an orbital having the lowest energy (or ground state), and

·              The emission of radiation from the excited atoms give rise to distinct spectral lines thereby form-ing the basis of emission spectroscopy.

Figure 24.1, depicts the energy-level diagrams both for an atom and a simple molecule illustrating the source of a line-spectrum and a band-spectrum as discussed above in (iii) and (i). 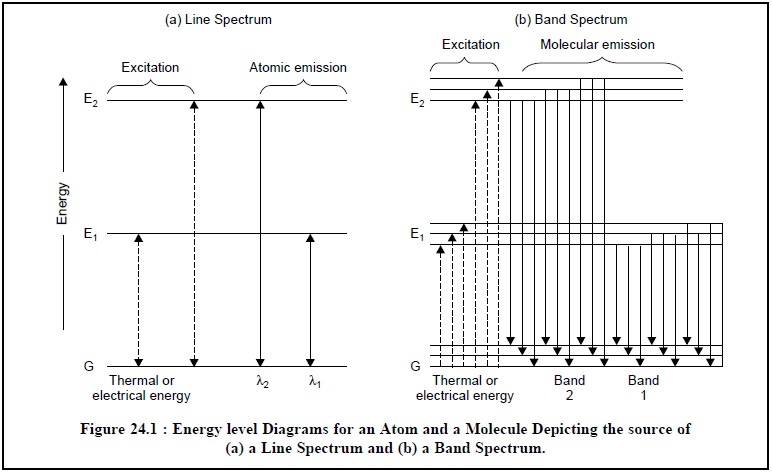 Figure 24.1 (a), designates the energy level diagram displaying the source of the lines in a typical spectrum of an element, where :

G = The horizontal line represents the ground state energy or the lowest energy of an atom (say Na atom), and

For a Na atom the single-outer-electron in the lowest ground state G is situated in the 3s orbital. Consequently, the energy level E1 might designate the energy of the atom when this ‘single electron’ has been duly raised to the 3p state by virtue of its absorption of thermal, electrical or radiant energy. This phenomenon has been clearly shown with the help of the dotted-line in Figure : 24.1 (a). However, the atom ultimately gets back to its ground state, may be after 10–8 s, thereby emitting radiation whose frequency is given by the following expression :

This particular phenomenon is depicted by the solid-line in Figure 24.1 (a). In the case of Na atom E2 designates the highly energetic 4p state and the radiation λ2 obtained therefrom will appear at a relatively shorter wavelength.

Figure 24.1 (b), represents the energy level diagram of a molecule where the energy differences among the various quantized vibrational and rotational states are comparatively much smaller as compared to the electronic states. The horizontal lines are due to the many excited vibrational states whereas the energy differences due to rotational states have not been shown in the said Figure. Thus, the multitude of various energy states is clearly shown by the solid lines in Figure 24.1 (b), whereby two distinct bands of radiation are obtained, each of which consists of a huge number of closely spaced lines.

(d) Effect of Concentration on Line and Band Spectra :

The radiant power by virtue of the radiant energy, of a line or band exclusively depends directly on the total number of excited atoms or molecules present, which is subsequently proportional to the total concentration of the species present in the source. Therefore, we may have the following expression :

C = Total concentration of the species, and

The aforesaid relationship forms the basis of quantitative emission spectroscopy.

The emission spectroscopy has a number of limitations that are enumerated below briefly :

Perhaps all the elements present in the periodic table might be excited to yield respective emission spectra by employing a huge energetic source. However, it has a serious drawback because most of the spectral lines invariably fall within the vacuum-ultraviolet region thereby rendering their critical studies rather difficult. Hence, the emission spectroscopy is exclusively limited to metals and metalloids. The non-metals, for instance : Phosphorus, Sulphur, Carbon etc. are not limited to these studies.

Emission spectroscopy of sodium vis-a-vis uranium : Emission spectroscopy is mainly based on sensitivity which is inversely proportional to the complexity of the atomic spectra. In ac-tual practice, it has been observed that the spectra of alkali-metals, like : K, Na, Li, Rb appear to be very simple and hence they may be studied conveniently without any difficulty. It is also pertinent to mention here that these spectra usually comprise of 13 to 14 adequately spaced lines having reasonably good sensitivity and possessing wavelengths.

In the specific case of sodium the resulting emission spectrum shall exhibit characteristic yellow lines. The spectrum is so highly sensitive that even the traces of Na show yellow lines distinctly.

In the case of other elements, for instance : Uranium, the emission spectrum normally displays thousands of narrowly spaced lines. However, the emission source possesses a fixed amount of energy which shall be spread up eventually amongst the thousands of lines thereby mini-mizing the sensitivity of each line. Hence, it is rather difficult to examine the less sensitive complex spectra of elements such as uranium.