The various essential components of a reasonably good emission spectrograph are as follows, namely :

The excitation sources may be sub divided into the following two heads, namely :

(a) Salient Features of Excitation Sources : These should fulfil the following procedural require-ments :

·              Electrons present in the atoms should be excited from the ground state to higher-energy-levels,

·              To produce sufficient line-intensity in order to detect these lines within the scope of the ‘de-tection limit’, and

(b) Types of Excitation Sources : The various types of excitation sources are as follows :

(i) Flames : A flame is generally employed for such molecules that do not need either very high temperatures for excitation or dissociation into atoms. Flames are comparatively inexpensive and cater for both stable and reproducible sources of excitation that can effectively handle a wide-range of typical analytical problems. However, the temperature of the flame is guided by a number of vital factors, such as :

Table 24.1, records the temperatures of commonly used fuels and oxidants in flames in emission spectroscopy.

Note : (1) The temperature of the flame and the composition of the flame afford a direct influence on interferences which may give rise to erroneous results,

(2) The dissociation of molecules and excitation of atoms usually occur at a specific temperature.

(ii) Direct Current Arc : It is considered to be one of the most versatile excitation modes used extensively for quantitative spectrochemical emission analysis. Figure 24.2 represents the differ-ent essential components of the circuit for a direct current are

Procedure : The various procedural steps are as follows :

·              Initial resistance caused due to air-gap is very high to allow conduction of current. Hence, the arc is first initiated by narrowing its gap momentarily while 110-220 V DC is applied. Once the current picks up flow, the temperature across the arc-gap shoots up promptly. The electrodes are pulled apart leaving a gap of 20 mm to 1 cm, thereby establishing the electric arc whose tempera-ture varies from 4000 to 8000° K.

·              Sample (solid or liquid) is usually introduced upon the lower electrode between the arc-gap, and

·              Variable resistance (C) adjusts the intensity of current, whereas inductance coil (B) stabilizes its flow.

Merits of Direct-Current-Arc : They are as follows :

·              Excitation energy is solely thermal and not electrical which is more than enough for exciting all the metal elements, and

·              DC-arc gives rise to emission species that are exclusively neutral atoms rather than ions.

(i)          Alternating Current Arc : Figure 24.3 depicts the various essential components of the circuit diagram for an alternating current arc :

Procedure : The procedural details are stated below :

·              After each cycle the arc picks out a new surface area whereby the entire surface of the sample under examination, is exhaustively arced and subsequently excited.

It is worthwhile noting that the arc-gap temperature in this case is considerably lower than the direct-current arc, due to the stop-and start nature of the source, which ultimately offers a much lower sensitivity.

The electrodes normally employed in emission spectroscopy are of two types, namely :

(a) Self Electrodes : If the material (sample) under probe is itself not only a good conductor but also can tolerate very high temperatures (in the arc-gap), the material may be used as the electrode ; and such electrodes are termed as self-electrodes.

Examples : Pure metal powders may be compressed into solid discs or cylinders which can be used as electrodes. Likewise, the analyzing alloys can also be used.

(b) Graphite Electrodes : If the material (sample) under study is neither a good conductor nor can afford to tolerate high temperatures, it is usually kept in a small cavity of the lower graphite electrode whereas the upper electrode (graphite) is given a pointed sharp-shape. These electrodes have centre posts which minimises wandering-of-the-arc source thereby improving the reproducibility ; and their narrow neck improves the sensitivity appreciably.

(a) Solids : Solid samples can also be sub-divided into two categories, such as : (i) Those possessing good conductance characteristics and can withstand high temperatures : it can be achieved by making electrodes with the material directly to be used for the electrical discharge ; (ii) Those having poor conductance and cannot withstand high temperatures : it can be powdered mixed with the powdered graphite (known as buffer) and placed in the depression of the lower graphite elec-trode. On passing the electrical discharge the material (sample) is first vaporised into the body of the discharge and subsequently the spectrographic emission occurs.

Note :  (1) Both types are found to be suitable for either aqueous or non-aqueous solvents, and

(2) Samples dissolved in organic solvents usually ignite in the discharge which may produce erratic emission. It is more prominent in the rotating-disc type sample carriers.

Monochromators help to isolate and separate the various lines of the sample’s emission spectrum.

Two types are generally used in the emission spectroscopy, namely :

(a) Prism Monochromators : In usual practice, the materials of construction of prisms are either quartz or silica (fused) because of their absolute transparency to UV-radiation. Prism monochromators normally bring forth two serious shortcomings which are discussed briefly here, namely :

First, when light from a single emission-line (of one particular wavelength) is made to pass through a quartz (or glass) prism, it emerges from the other side of the prism as two different lines as shown in Figure 24.4 (a). This splitting-up of one line into two separate lines affords not only the loss of the emerged light’s intensity but also complicates the interpretation of the spectrum ; thereby rendering its use both in qualitative and quantitative analysis rather difficult. Cornu Type Prisms eliminate this lacuna completely. In this case, two-half prisms are joined together : the first half-prism splits the incident emission line into two separate beams, whereas the second-half prism recombines them into a single emergent beam as shown in Figure 24.4 (b).

Secondly, the dispersion of a prism is never constant over a wide range of wavelength, whereby the identification of either the emission lines or the unknown wavelengths is rather difficult on the basis of simply measuring their dispersions.

·              Much better resolution achieved : thereby resulting in the development of many sophisticated equipments,

·              Resolution is constant and independent of wavelength : thereby the identification of the wave-length of emission lines on a photographic plate is simplified i.e., once a known reference line is identified, other lines may be known very conveniently.

Disadvantage : The major disadvantage of grating monochromators is that its higher-order-wave-lengths overlap which may be eliminated completely either by using filters or by employing detectors that are not sensitive to the higher-orders.

There are two types of detectors that are used most frequently in emission spectroscopy, namely :

(a) Photographic Detectors-used for qualitative analysis, and

(b) Photomultiplier Detectors-used for quantitative analysis.

The two detectors shall be discussed here briefly.

Many spectrographs record the intensity of spectral lines on a photographic emulsion directly, which is subsequently developed by an appropriate ‘developer’ in the prescribed duration at a specific recom-mended temperature.

Procedure : The various steps involved are as follows :

(i)          A beam of light is passed through a clear zone of the film and subsequently the intensity of the transmitted beam is measured by means of a phototube fitted in the densitometer,

(ii)       A beam of light is then passed through the darkened zone of the film and the intensity is measured as stated above,

(iv)      The region BC in Figure 24.5 clearly shows that the density is directly proportional to the loga-rithm of the intensity of the curve and represents the most useful zone of the curve, and

(v)        The slope of region BC is usually called as the ‘gamma’ (γ) of the emulsion of photographic plate and is expressed as :

(b) Photomultiplier Detectors : Spectrographs that record the direct-reading emissions exclusively essentially make use of photomultiplier detectors instead of a photographic plate. It requires a large number of photomultiplier tubes for carrying out the detection of different emission lines simultaneously and that is way the direct-reading devices are relatively much costlier. By virtue of its convenience, fast and more accurate and precise results, this type of detectors is always preferred.

However, it is worthwhile to have a comparison of the merits and demerits of photographic and photomultiplier detectors side-by-side as follows : 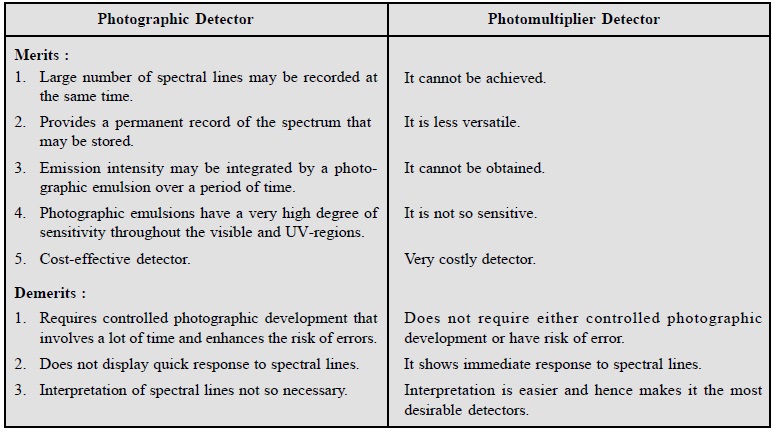 The resulting ‘emission spectra’ from the detector may be thoroughly studied with the aid of an effective optical arrangement which will critically identify the frequencies and their respective intensities. The optical arrangement varies from one instrument to another based on the device used, and hence the nomenclature also varies, namely :

However, the various commercially available spectrographs may be differentiated solely by the fact whether they make use of either a ‘prism’ or a ‘grating’ as the vital dispensing medium. A good ‘spectrograph’ using either a prism or a grating shall be discussed briefly here.

Figure 24.6, shows the schematic diagram of a Littrow Type spectrograph which essentially has the following components, namely :

A Littrow type spectrograph makes use of a Littrow-type prism exclusively which is made from a single piece of Quartz with its rear-surface mirrored or metallized (with Silver). This sort of prism com-pletely eliminates the polarization effects as the beam of light moves back and forth through the body of the same prism. Thus, a beam of light from the source of light (S) passes through the slit (SL), gets reflected through the reflecting prism (P1), penetrates through the collimating lens (CL), enters the Littrow prism (P2), again gets reflected by its reflective coating (RC), enters the collimating lens (CL) and finally comes out as a spectrum that is recorded on the photographic plate (PP).

It is interesting to observe that a typical large Littrow Spectrograph having a single Quartz prism covers a wavelength range from 2000 to 80000 Å.

An Ebert-mounting spectrograph exclusively makes use of a plane-grating rather than a concave-grating as employed either in Rowland mounting or in Eagle arrangement. It enormously helps as the ruling of the grating is a lot easier and less complicated. In this particular optical device a concave mirror (CM) is used to render the radiation striking the grating (G) parallel and also to focus the dispersed (-o-o-o-) radiation on the photographic plate of the camera.

Figure 24.7, depicts the schematic diagram of a Ebert-Mounting Spectrograph with the following vital components.