Elements of Contract: Meaning and Definition

Law means a ‘set of rules’ which governs our behaviour and relating in a civilized society.

Elements of Contract: Meaning and Definition

Law means a ‘set of rules’ which governs our behaviour and relating in a civilized society. So there is no need of Law in a uncivilized society. One to should know the law to which he is subjected to because ignorance of law is no excuse.

Generally life in a civilized society is regulated by a welfare state. The existence and growth of civilized society requires peace, harmony, justice, social security and order which is possible only through laws. Every country has a regulatory framework comprised by a plethora of laws such as constitutional law, civil law, criminal law, tax law, labour law, business law etc. Every law has a particular field of activity to regulate and govern.

The Indian Contract Act occupies the most important place in the Commercial Law. Without Contract Act, it would have been difficult to carry on trade or any other business activity. It is not only the business community which is concerned with the Contract Act, but it also influences the entire society. The main object of contract act is to assure that the rights and obligations which arise out of the contract are carried out and in case of failure to do so, the remedies are made available to the affected party. 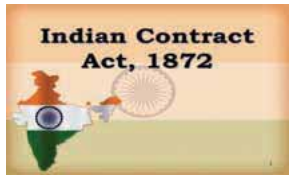 The Indian Contract Act is so much infused in the daily lives that it affects all. For every purchase that one does, or a loan taken from a banker, or a ride one takes in a bus and many other transactions of daily life has its impact by Contract Act.

The English common law is the base for the development of Indian Contract Act 1872. The Act came into force on 1st September 1872, and applies to the whole of India except the state of Jammu and Kashmir. This Act applies to the usage of trade and lays down the general principles.

There are two parts of Indian Contract Act namelt

As per the Indian Contract Act, 1872, a “contract” is an agreement enforceable by law. The agreements not enforceable by law are not contracts. An  “agreement”  means ‘a promise or a set of promises’ forming consideration for each other.  A promise arises when a proposal is accepted. By implication, an agreement is an accepted proposal. In other words, an agreement consists of an ‘offer’ and its ‘acceptance’. 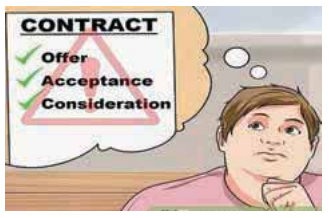