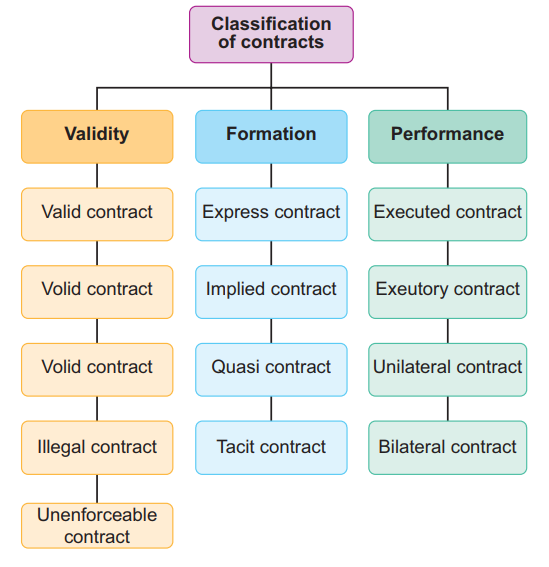 I. On the Basis of the validity

An agreement which fulfils all the essentials prescribed by law on the basis of its creation. For example S offers to sell his car for Rs.2,00,000 to T. T agrees to buy it. It is a Valid Contract.

An agreement which is enforceable by law at the option of one or more parties but not at the option of the other or others is a voidable contract. This is the result of coercion, undue influence, fraud and misrepresentation.

It is a contract which is forbidden by law. All illegal agreements are Void but all void agreements or contracts are not necessarily illegal. Contract that is immoral or opposed to public policy are illegal in nature.

·           Unlike illegal agreements there is no punishment to the parties to a void agreement.

·           Illegal agreements are void from the very beginning but sometimes valid contracts may subsequently become void.

Where a contract is unenforceable because of some technical defect i.e. absence in writing barred by imitation etc. If the parties perform the contract it will be valid, but the court will not compel them if they do not

II. On the Basis of the Formation

A contract made by word spoken or written. According to Section. 9, in so for as the proposal or acceptance of any promise is made in words, the promise is said to be express. For example P says to Q ‘will you buy my bicycle for Rs.1,000?” Q says to P “Yes”.

The implied contract is one, which is not expressly written but understood by the conduct of parties. Where the proposal or acceptance of any promise is made otherwise than in words, the promise is said to be implied. For example A gets into a public bus, there is an implied contract that he will pay the bus fare.

It is a contract created by law. Actually, there is no contract. It is based on the principle that “a person shall not be allowed to enrich himself unjustly at the expense of the other”. In other words it is an obligation of one party to another imposed by law independent of an agreement between the parties.

A contract is said to be tacit when it has to be inferred from the conduct of the parties. For example obtaining cash through automatic teller machine, sale by fall of hammer of an auction sale.

III. On the Basis of Performance

A contract in which both  the  parties  have fulfilled their obligations under the contract. For example X contracts to  buy a car from Y by paying cash, Y instantly delivers his car.

A contract in which both the parties are yet to fulfil their obligations, it is said to be an executory contract. For example A agrees to buy B’s cycle by promising to pay cash on 15th June. B agrees to deliver the cycle on 20th June.

For example X promises to pay Y a sum of Rs.10,000 for the goods to be delivered by Y. X paid the money and Y is yet to deliver the goods.

A contract in which both the parties commit to perform their respective promises is called a bilateral contract. For example R offers to sell his fiat car to S for Rs.10,00,000 on acceptance of R’s offer by S, there is a promise by R to Sell the car and there is a promise by S to purchase the car, there are two promises.