Chapter: Essentials of Anatomy and Physiology: Fluid-Electrolyte and Acid-Base Balance

Electrolytes are chemicals that dissolve in water and dissociate into their positive and negative ions. Most electrolytes are the inorganic salts, acids, and bases found in all body fluids.

Electrolytes are chemicals that dissolve in water and dissociate into their positive and negative ions. Most electrolytes are the inorganic salts, acids, and bases found in all body fluids.

Most organic compounds are non-electrolytes; that is, they do not ionize when in solution. Glucose, for example, dissolves in water but does not ionize; it remains as intact glucose molecules. Some proteins, however, do form ionic bonds and when in solution dissociate into ions.

Electrolytes help create the osmolarity of body flu- ids and, therefore, help regulate the osmosis of water between water compartments. Some electrolytes are involved in acid–base regulatory mechanisms, or they are part of structural components of tissues or part of enzymes. 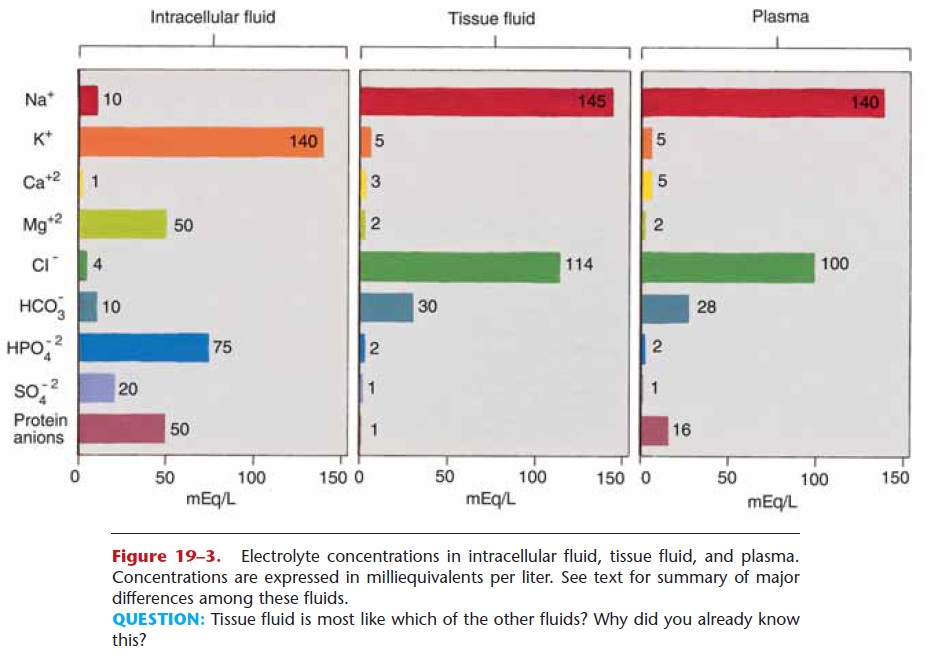 Figure 19–3. Electrolyte concentrations in intracellular fluid, tissue fluid, and plasma. Concentrations are expressed in milliequivalents per liter. See text for summary of major differences among these fluids.

Electrolytes are part of the food and beverages we consume, are absorbed by the gastrointestinal tract into the blood, and become part of body fluids. Hormones regulate the ECF concentrations of some electrolytes. Aldosterone increases the reabsorption of Na+ ions and the excretion of K+ ions by the kidneys. The blood sodium level is thereby raised, and the blood potassium level is lowered. ANP increases the excretion of Na+ ions by the kidneys and lowers the blood sodium level. Parathyroid hormone (PTH) and calcitonin regulate the blood levels of calcium and phosphate. PTH increases the reabsorption of these minerals from bones, and increases their absorption from food in the small intestine (vitamin D is also nec-essary). Calcitonin promotes the removal of calcium and phosphate from the blood to form bone matrix.

Electrolytes are lost in urine, sweat, and feces. Urine contains the electrolytes that are not reab-sorbed by the kidney tubules; the major one of these is Na+ ions. Other electrolytes are present in urine when their concentrations in the blood exceed the body’s need for them.

The most abundant electrolytes in sweat are Na+ ions and Cl2 ions. Electrolytes lost in feces are those that are not absorbed in either the small intestine or colon.