Chapter: Essentials of Anatomy and Physiology: Fluid-Electrolyte and Acid-Base Balance

The normal pH range of blood is 7.35 to 7.45. The pH of tissue fluid is similar but can vary slightly above or below this range.

You have already learned quite a bit about the regula-tion of the pH of body fluids in the chapters on chemistry, the respiratory system, and the urinary system. In this section, we will put all of that information together.

The normal pH range of blood is 7.35 to 7.45. The pH of tissue fluid is similar but can vary slightly above or below this range. The intracellular fluid has a pH range of 6.8 to 7.0. Notice that these ranges of pH are quite narrow; they must be maintained in order for enzymatic reactions and other processes to proceed normally.

Maintenance of acid–base homeostasis is accom-plished by the buffer systems in body fluids, the rate and depth of respiration, and the kidneys.

The purpose of a buffer system is to prevent drastic changes in the pH of body fluids by chemically react-ing with strong acids or bases that would otherwise greatly change the pH. A buffer system consists of a weak acid and a weak base. These molecules react with strong acids or bases that may be produced and change them to substances that do not have a great effect on pH.

The two components of this buffer system are carbonic acid (H2CO3), a weak acid, and sodium bicarbonate (NaHCO3), a weak base. Each of these molecules par-ticipates in a specific type of reaction.

If a potential pH change is created by a strong acid, the following reaction takes place:

The strong acid has reacted with the sodium bicar-bonate to produce a salt (NaCl) that has no effect on pH and a weak acid that has little effect on pH.

If a potential pH change is created by a strong base, the following reaction takes place:

The strong base has reacted with the carbonic acid to produce water, which has no effect on pH and a weak base that has little effect on pH.

The bicarbonate buffer system is important in both the blood and tissue fluid. During normal metabolism, these fluids tend to become more acidic, so more sodium bicarbonate than carbonic acid is needed. The usual ratio of these molecules to each other is about 20 to 1 (NaHCO3 to H2CO3).

If a potential pH change is created by a strong acid, the following reaction takes place:

The strong acid has reacted with the sodium mono-hydrogen phosphate to produce a salt that has no effect on pH and a weak acid that has little effect on pH.

If a potential pH change is created by a strong base, the following reaction takes place:

The strong base has reacted with the sodium dihy-drogen phosphate to form water, which has no effect on pH and a weak base that has little effect on pH. 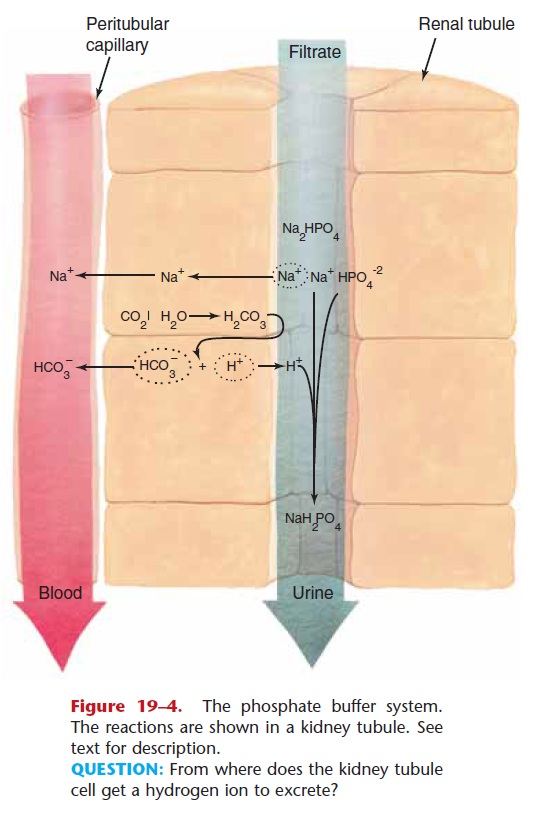 Figure 19–4. The phosphate buffer system. The reactions are shown in a kidney tubule. See text for description.

QUESTION: From where does the kidney tubule cell get a hydrogen ion to excrete?

The phosphate buffer system is important in the regulation of the pH of the blood by the kidneys (see Fig. 19–4). The cells of the kidney tubules can remove excess hydrogen ions by forming NaH2PO4, which is excreted in urine. The retained Na+ ions are returned to the blood in the peritubular capillaries, along with bicarbonate ions.

This buffer system is the most important one in the intracellular fluid. You may recall that hemoglobin buffers the hydrogen ions formed during CO2 transport. The amino acids that make up proteins each have a carboxyl group (COOH) and an amine (or amino)group (NH2) and may act as either acids or bases.

The carboxyl group may act as an acid because it can donate a hydrogen ion (H+) to the fluid to coun-teract increasing alkalinity:

The amine group may act as a base because it can pick up an excess hydrogen ion from the fluid to coun-teract increasing acidity:

The buffer systems react within a fraction of a sec-ond to prevent drastic pH changes. However, they have the least capacity to prevent great changes in pH because a limited number of molecules of these buffers are present in body fluids. When an ongoing cause is disrupting the normal pH, the respiratory and renal mechanisms will also be needed.

The excess H+ ions lower the pH of body fluids. Respiratory alkalosis is far less common but is the result of breathing more rapidly, which increases the amount of CO2 exhaled. Because there are fewer CO2 molecules in the body fluids, fewer H+ ions are formed, and pH tends to rise.

Changes in pH caused by other than a respiratory dis-order are called metabolic acidosis or alkalosis. In either case, the respiratory system may help prevent a drastic change in pH.

Metabolic acidosis may be caused by kidney dis-ease, uncontrolled diabetes mellitus, excessive diar-rhea or vomiting, or the use of some diuretics. When excess H+ ions are present in body fluids, pH begins to decrease, and this stimulates the respiratory centers in the medulla. The response is to increase the rate of breathing to exhale more CO2 to decrease H+ ion for-mation. This helps raise the pH back toward the nor-mal range.

Metabolic alkalosis is not common, but may be caused by the overuse of antacid medications or the vomiting of stomach contents only. As the pH of body fluids begins to rise, breathing slows and decreases the amount of CO2 exhaled. The CO2 retained within the body increases the formation of H+ ions, which will help lower the pH back toward the normal range.

The respiratory system responds quickly to prevent drastic changes in pH, usually within 1 to 3 minutes. For an ongoing metabolic pH imbalance, however, the respiratory mechanism does not have the capacity to fully compensate. In such cases, respiratory compen-sation is only 50% to 75% effective.

As just discussed, the kidneys help reg-ulate the pH of extracellular fluid by excreting or con-serving H+ ions and by reabsorbing (or not) Na+ ions and HCO32 ions. One mechanism was depicted in Fig. 18–6, and another, involving the phosphate buffer system, is shown in Fig. 19–4.

The kidneys have the greatest capacity to buffer an ongoing pH change. Although the renal mechanisms do not become fully functional for several hours to days, once they do they continue to be effective far longer than respiratory mechanisms. Let us use as an example a patient with untreated diabetes mellitus who is in ketoacidosis, a metabolic acidosis. As acidic ketones accumulate in the blood, the capacity of the extracellular fluid (ECF) buffer systems is quickly exhausted. Breathing rate then increases, and more CO2 is exhaled to decrease H+ ion formation and raise the pH of ECF. There is, however, a limit to how much the respiratory rate can increase, but the renal

buffering mechanisms will then become effective. At this time it is the kidneys that are keeping the patient alive by preventing acidosis from reaching a fatal level. Even the kidneys have limits, however, and the cause of the acidosis must be corrected to prevent death.

A state of acidosis is most detrimental to the central nervous system, causing depression of impulse trans-mission at synapses. A person in acidosis becomes con-fused and disoriented, then lapses into a coma.

Alkalosis has the opposite effect and affects both the central and peripheral nervous systems. Increased synaptic transmission, even without stimuli, is first indicated by irritability and muscle twitches. Progres-sive alkalosis is characterized by severe muscle spasms and convulsions.

The types of pH changes are summarized in Table 19–3.