Faraday's Law of electromagnetic Induction: Michael Faraday, in 1831 discovered experimentally that a current was induced in a conducting loop when the magnetic flux linking the loop changed. 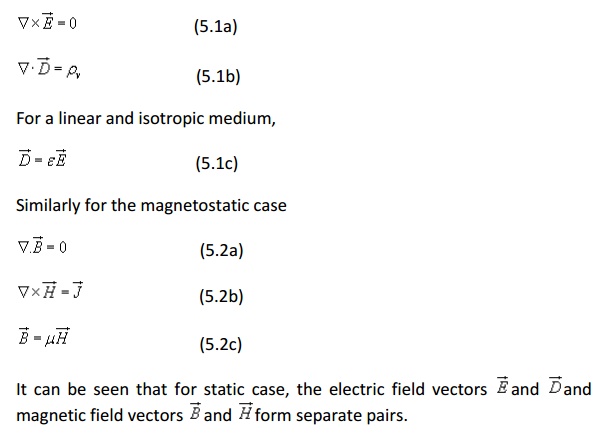 We begin our discussion with Faraday's Law of electromagnetic induction and then present the Maxwell's equations which form the foundation for the electromagnetic theory.

Michael Faraday, in 1831 discovered experimentally that a current was induced in a conducting loop when the magnetic flux linking the loop changed. In terms of fields, we can say that a time varying magnetic field produces an electromotive force (emf) which causes a current in a closed circuit. The quantitative relation between the induced emf (the voltage that arises from conductors moving in a magnetic field or from changing magnetic fields) and the rate of change of flux linkage developed based on experimental observation is known as Faraday's law. Mathematically, the induced emf can be written as

(b)    relative motion between a steady flux a closed path.

If the closed path is in the form of N tightly wound turns of a coil, the change in the magnetic flux linking the coil induces an emf in each turn of the coil and total emf is the sum of the induced emfs of the individual turns, i.e., 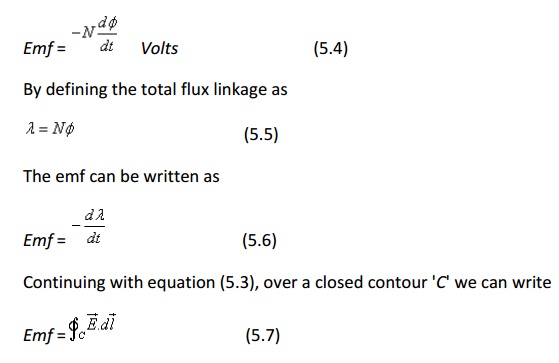 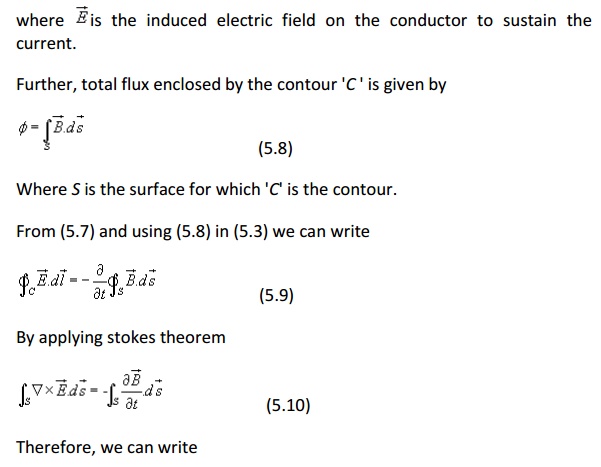 which is the Faraday's law in the point form

As shown in figure 5.1, a transformer consists of two or more numbers of coils coupled magnetically through a common core. Let us consider an ideal transformer whose winding has zero resistance, the core having infinite permittivity and magnetic losses are zero. 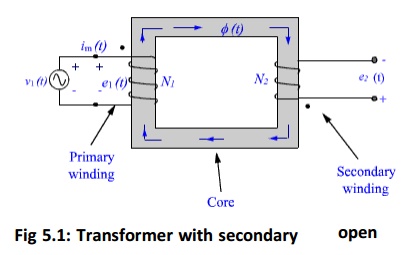 These assumptions ensure that the magnetization current under no load condition is vanishingly small and can be ignored. Further, all time varying flux produced by the primary winding will follow the magnetic path inside the core and link to the secondary coil without any leakage. If N1 and N2 are the number of turns in the primary and the secondary windings respectively, the induced emfs are

(The polarities are marked, hence negative sign is omitted. The induced emf is +ve at the dotted end of the winding.)

where 'a' is the transformation ratio. When the secondary winding is connected to a load, the current flows in the secondary, which produces a flux opposing the original flux. The net flux in the core decreases and induced emf will tend to decrease from the no load value. This causes the primary current to increase to nullify the decrease in the flux and induced emf. The current continues to increase till the flux in the core and the induced emfs are restored to the no load values. Thus the source supplies power to the primary winding and the secondary winding delivers the power to the load. Equating the powers 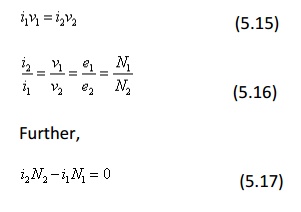 i.e., the net magnetomotive force (mmf) needed to excite the transformer is zero under ideal condition.

Let us consider a conductor moving in a steady magnetic field as shown in the fig 5.2. 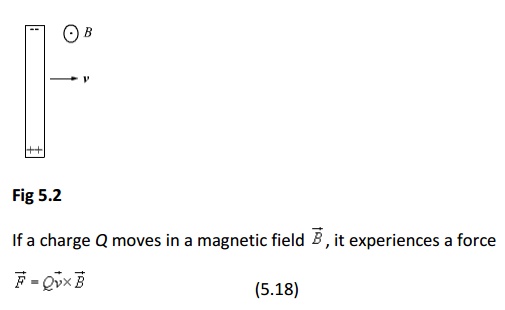 This force will cause the electrons in the conductor to drift towards one end and leave the other end positively charged, thus creating a field and charge separation continuous until electric and magnetic forces balance and an equilibrium is reached very quickly, the net force on the moving conductor is zero.

A classic example of motional emf is given in Additonal Solved Example No.1 . 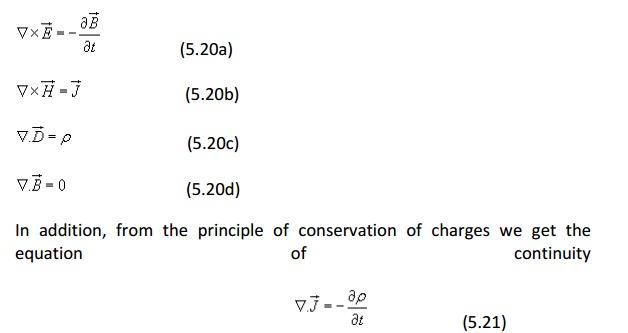 A classic example for this is given below . Suppose we are in the process of charging up a capacitor as shown in fig 5.3.

Let us apply the Ampere's Law for the Amperian loop shown in fig 5.3. Ienc = I is the total current passing through the loop. But if we draw a baloon shaped surface as in fig 5.3, no current passes through this surface and hence Ienc = 0. But for non steady currents such as this one, the concept of current enclosed by a loop is ill-defined since it depends on what surface you use. In fact Ampere's Law should also hold true for time varying case as well, then comes the idea of displacement current which will be introduced in the next few slides.

We can write for time varying case, 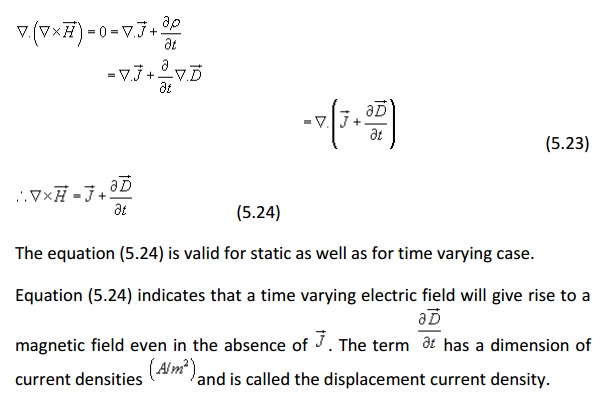 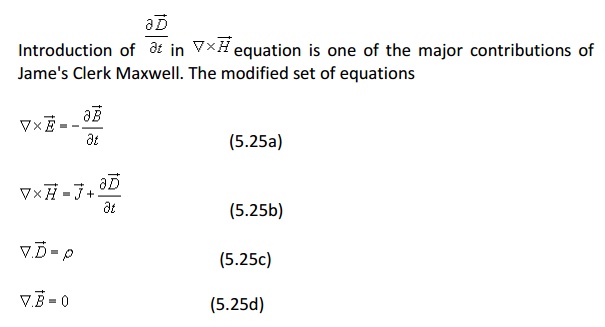 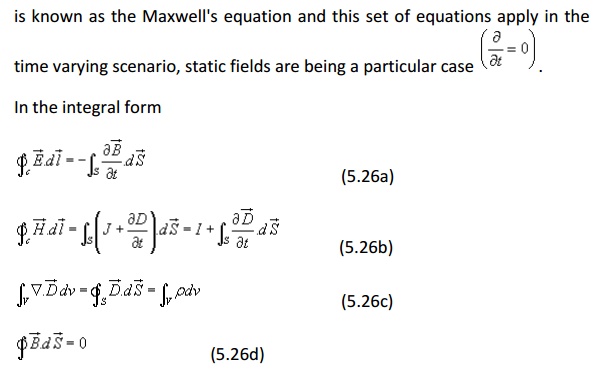 The modification of Ampere's law by Maxwell has led to the development of a unified electromagnetic field theory. By introducing the displacement current term, Maxwell could predict the propagation of EM waves. Existence of EM waves was later demonstrated by Hertz experimentally which led to the new era of radio communication.

With reference to fig 5.3 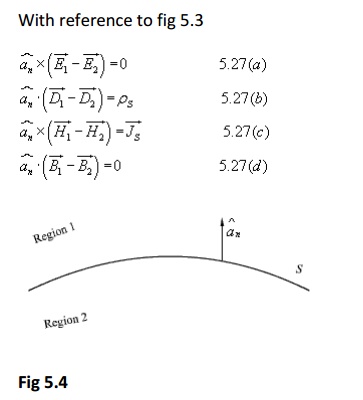 Wave equation and their solution:

From equation 5.25 we can write the Maxwell's equations in the differential form as 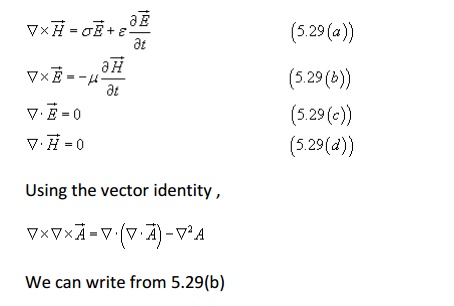 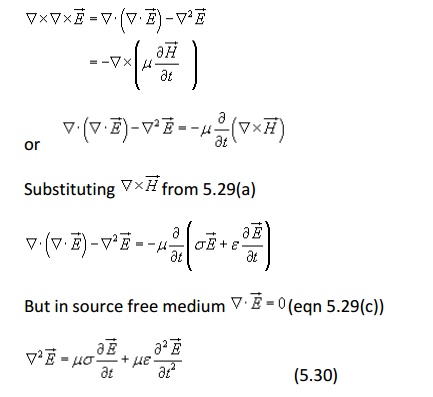 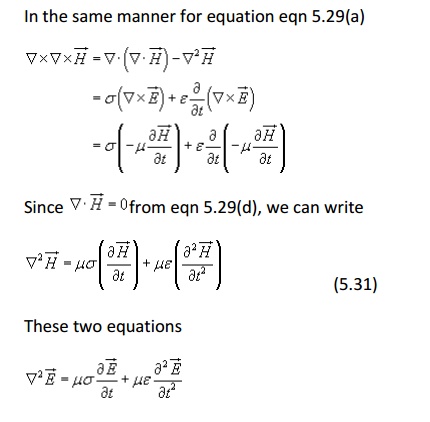 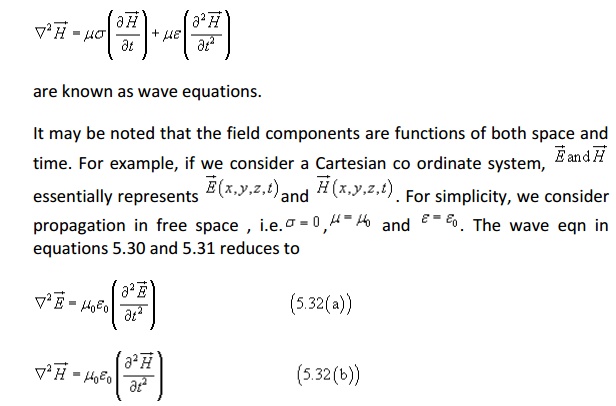 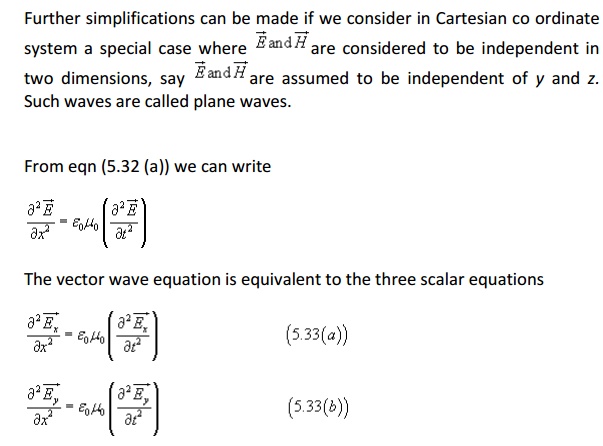 As we have assumed that the field components are independent of y and z eqn (5.34) reduces to

A field component satisfying either of the last two conditions (i.e (ii) and (iii))is not a part of a plane wave motion and hence Ex is taken to be equal to zero. Therefore, a uniform plane wave propagating in x direction does not have a field component (E or H) acting along x.

Without loss of generality let us now consider a plane wave having Ey component only (Identical results can be obtained for Ez component) .

The equation involving such wave propagation is given by

corresponds to a wave traveling in the -x direction. The general solution of the wave eqn thus consists of two waves, one traveling away from the source and other traveling back towards the source. In the absence of any reflection, the second form of the eqn (5.37) is zero and the solution can be written as

Such a wave motion is graphically shown in fig 5.5 at two instances of time t1 and t2. 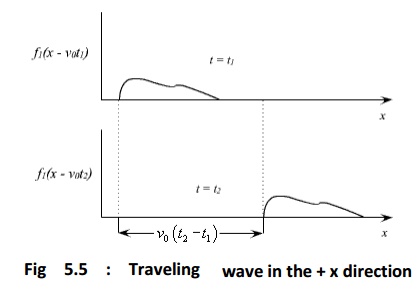 Let us now consider the relationship between E and H components for the forward traveling wave. 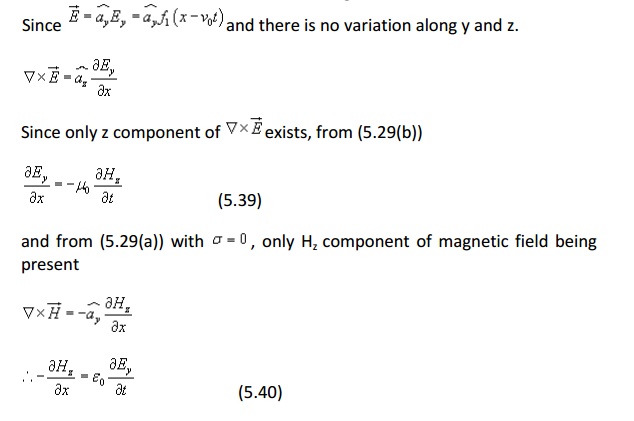 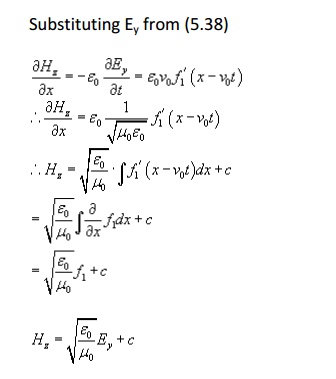 The constant of integration means that a field independent of x may also exist. However, this field will not be a part of the wave motion.

which relates the E and H components of the traveling wave. 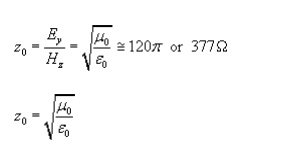 is called the characteristic or intrinsic impedance of the free space 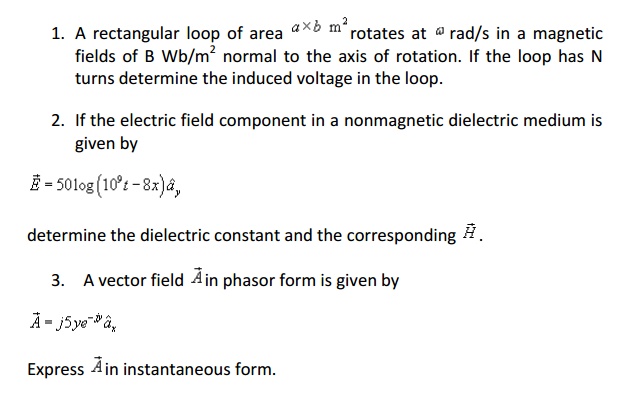