Once informed consent has been obtained, the initiation of treatment involves several decisions.

Once informed consent has been obtained, the initiation of treat-ment involves several decisions. These include selection of ECT device, electrode placement, dose of electricity, choice of pre-medications and frequency of treatment.

traditionally bifrontotemporal. The advantage of unilateral placement is that there is less memory loss and confusion than with bilateral electrode placement (Horne et al., 1985; Weiner et al., 1986; Abrams, 1982). The disadvantage of unilateral ECT is that it appears to be less effective when the dose of electricity given is close to seizure threshold (Sackeim et al., 1993), and the seizure threshold can vary more than 40-fold from individual to individual (Sackeim et al., 1987, 1991). With bilateral placement, seizure threshold is less of a concern, and the degree and speed of response appears greater with (high dose) bilateral than unilat-eral ECT (Nobler et al., 1997; Sackeim et al., 2000). Although bi-frontotemporal placement has been more widely used, a limited number of studies suggest that bifrontal electrode placement may offer comparable treatment efficacy with fewer cognitive side ef-fects (Weiner, 1994). Individuals who are unresponsive to several adequately dosed unilateral treatments may benefit from a switch to bilateral electrode placement.

From the start of the treatment procedure (see Table 74.1) EKG, heart rate and blood pressure are monitored and oxygen saturation is measured via pulse oximetry. Oxygen by mask is typically administered after the induction of anesthesia and until the return of spontaneous respiration. Depending upon the pref-erence of the treatment team, patients may or may not be pre-medicated with an anticholinergic agent. Atropine and glycopyr-rolate are the agents most commonly used (Abrams, 1997). The rationale for using these premedications is twofold. First, they reduce the bradycardia observed immediately after the delivery of the stimulus, and secondly, they dry secretions during anes-thesia (Sommer et al., 1989). The decrease in heart rate initially observed during seizure induction is the result of increased vagal tone which occurs immediately after the stimulus (Elliot et al., 1982). 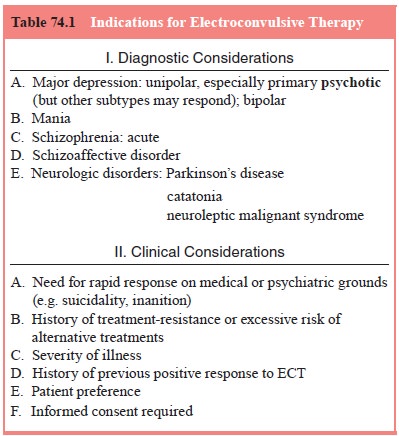 The patient is rendered unconscious with a short-acting general anesthetic. Methohexital 0.75 to 1.0 mg/kg given intrave-nously is the agent most commonly used (Folk et al., 2000). Once the patient is unconscious, a muscle relaxant is administered. In-travenous succinylcholine 0.5 to 1.0 mg/kg is almost always used for this purpose. The goal of the muscle relaxant is to dampen the tonic–clonic movements from the seizure and reduce the risk of musculoskeletal injury (Elliot et al., 1982; Lippmann et al., 1993; Weiner, 1994). The cuff technique (Fink and Johnson, 1982) may be applied to an ankle or forearm, preventing localized cir-culation of the muscle relaxant, thereby facilitating monitoring of the motor seizure duration. The degree of relaxation is some-what dependent upon the preference of the practitioner; however, when there is a history of skeletal disease the paralysis should be nearly complete. The fasciculations induced by succinylcholine can cause myalgias which can be prevented by administration of a small dose of the nondepolarizing agent, curare, prior to dosing with the succinylcholine. When curare is used in this manner it is necessary to increase the succinylcholine dosage by approx-imately 25% to achieve the same level of muscle relaxation as previously.

When the patient is unconscious and relaxed, the stimulus is delivered, using the desired electrode placement. Initially, the jaw will clench as a result of direct electrical stimulation. The heart rate will slow and the patient will generally have tonic contraction of the extremities (Elliot et al., 1982). This initial period, which lasts anywhere from 2 to 5 seconds, is usually followed by a marked increase in blood pressure and heart rate (McCall, 1993). This is secondary to a centrally mediated catecholamine surge (Elliot et al., 1982; Swartz, 1993). The extremities change to tonic–clonic contractions, the intensity of which depends on the degree to which they have been modified by the muscle relaxant.

During the treatment, seizure duration should be monitored, if possible, via a one- or two-channel electroencepha-logram (EEG), an integral component of most modern ECT de-vices (Stephens et al., 1991). Combining motor movement timing with EEG monitoring yields the most reliable seizure duration determinations in the clinical setting (Lippmann et al., 1993). Although dose of electricity relative to seizure threshold is the important variable, in general, an adequate seizure is usually between 20 seconds and 2 minutes in duration.

Once the seizure terminates, the patient is continuously supported and monitored until breathing spontaneously and re-sponsive to voice commands, with return of muscle strength. The patient’s vital signs are monitored every 15 minutes until stable.

This process is repeated for an average of 6 to 12 sessions in the treatment of depression. In the USA, ECT is usually performed three times per week, while in the UK and Europe twice-a-week schedule is more common. The available data suggest that the twice-a-week schedule produces an equivalent therapeutic response with fewer treatments, but the speed of clinical improvement is slower than the three times per week schedule (Lerer et al., 1995; Shapira et al., 2000). On the other hand, the more rapid therapeutic response to thrice weekly ECT is accompanied by greater cognitive adverse effects than those associated with the slower rate of treatments (Lerer et al., 1995; Shapira et al., 2000).

Regardless of the treatment schedule, the rate of response will vary for each patient. Often, the patient’s vegetative symp-toms will respond before the patient feels subjectively improved.

The potential adverse effects from ECT range from mild com-plications such as myalgias, to serious events such as fractured bones, to catastrophes such as death. At present, the risk of seri-ous complication is about 1 in 1000 patients. The risk of death is about 1 in 10 000 patients, which approximates the risk of general anesthesia for a minor surgical procedure (NIH/NIMH, 1985) and is actually lower than the spontaneous death rate in the com-munity (Abrams, 1997).

Cardiac complications are the most frequent medical side effects associated with ECT. The arrhythmias range in sever-ity from the common and benign sinus tachycardia to rare life-threatening or fatal ventricular arrhythmias.

Confusion and memory loss are also commonly occurring side effects. These adverse effects are the major factor limiting the use of ECT. Transient confusion occurs universally as a post-ictal event. Memory disturbance also occurs quite frequently (Calev, 1994). In general, during the acute course of ECT, both retrograde and anterograde memory are impaired to some degree (NIH/NIMH, 1985; Calev, 1994). Retrograde amnesia is gener-ally felt to be more problematic. After the treatments end, the memory difficulties gradually resolve over the ensuing weeks to months (Lisanby et al., 2000). Some patients may have per-manent spottiness in memory for events that occurred in the weeks to months before, during and following the ECT course. Rarely, patients have complained of persistent memory difficul-ties severe enough to interfere with social and/or occupational functioning (NIH/NIMH, 1985). However, the infrequency with which this occurs, and certain technical factors such as the lack of nondepressed pretreatment memory and other neuropsychiat-ric measures (Coffey, 1994) has made it difficult to study these individuals systematically. Subjective impressions of post-ECT memory deficits appear to correlate more closely with clinical outcome and mood state than with objective cognitive measures (Prudic et al., 2000). Although evidence to date points to only a transient and tolerable degree of cognitive impairment with con-tinuation and maintenance ECT (Datto et al., 2001) as these treat-ment strategies continue to play an increasing role in the long-term treatment of mood disorders, more definitive research on their effects on memory will help guide clinicians.

Few formal studies of ECT effects on cognitive function-ing in children and adolescents have been conducted in the past 50 years.

As most patients referred for ECT already are taking psychotro-pic medications, many ECT–drug interactions result from the inadvertent or intentional continuation of preexisting medication regimens with the initiation of convulsive therapy. Community surveys indicate that fewer than half of patients have discontin-ued all previous psychotropic medications at the time of ECT (Prudic et al., 2000). While more definitive research is underway, the American Psychiatric Association Task Force recommends that, particularly for patients with a history of treatment resis-tance, “concurrent treatment with an antidepressant medication and ECT should be considered” (American Psychiatric Associa-tion, 2001).

Among the unique features of ECT is the time-limited nature of its use in the treatment of acute episodes of illness. Following completion of an acute treatment course, ECT is generally terminated abruptly, coincident both with clinical response and, in many cases, impending inpatient discharge. It is now clearly established that left untreated after completion of ECT, at least half of patients will relapse, most within 6 months (American Psychiatric Association, 2001; Sackeim et al., 2001a). Antidepressant treatment is now used routinely following a course of ECT to help prevent such relapse. Most contemporary authors adhere to the distinction between continuation treatment, over 6 months or so, to prevent relapse into the index episode, and maintenance treatment beyond that point, with the goal of avoiding recurrence, that is a new episode of illness. Nearly all published data on continuation and maintenance treatment have dealt with ECT administered for the treatment of depression.

Additional research is necessary to develop even more effective strategies to prevent relapse after completion of ECT.

Although the optimal methodology for an extension of the traditional ECT course – including electrode placement, frequency and duration of treatment – is yet to be determined (Scott et al., 1991) it has become the subject of the ongoing NIMH-supported four-site CORE trial (O’Connor et al. 2001). Following an acute course of generally successful bilateral ECT (see earlier), patients in the CORE trial were randomized for the next 6 months to either a weekly to monthly maintenance ECT trial or to an active control pharmacotherapy condition, consisting of the most effective post-ECT medication regimen (combined nortriptyline plus lithium) identified by Sackeim et al., (2001a). Moreover, additional data are required on the risk of cognitive and other adverse effects of continuation and maintenance ECT, and the best means of minimizing untoward effects of this potentially valuable intervention (Fox, 2001). There is general agreement that new written informed consent, beyond that obtained for the acute series of treatments, must be secured for continuation/maintenance ECT. In the event of prolonged maintenance ECT, the American Psychiatric Association (2001) Task Force recommends that the informed consent process be repeated every 6 months.

The total population of patients who are considered ECT treat-ment failures can be divided into three categories: true nonre-sponders; relative nonresponders for whom ECT can yet be made to work; and individuals for whom, upon closer inspection and ex-amination, ECT was not the right treatment choice. Thus, the first approach to the ECT-resistant patient is to assure that an appro-priately intensive trial of convulsive therapy has been attempted. Then reassessment, removal of any obstacles to treatment re-sponsivity and, in most cases, entry into a treatment-resistant depression algorithm are indicated.

A course of eight to 12 bilateral ECT treatments should be com-pleted before any patient is declared ECT resistant. Patients who fail to respond to several treatments with unilateral electrode placement should be switched to bilateral ECT and offered an op-portunity to respond to a full trial of that modality (Delva et al., 2001). The treatment history of the ECT-refractory patient should be reviewed to ensure that seizures were generalized and of ad-equate duration, and that in the case of unilateral electrode place-ment, stimulus intensity was sufficiently above seizure threshold. Some resistant patients may require additional ECT sessions in order to respond (Sackeim et al., 1990).

Even in carefully selected patients, lack of response to a course of ECT may occur in 10 to 30% of individuals (NIH/NIMH, 1985). Nonetheless, this degree of refractoriness should trigger a reassessment of the patient, with confirmation of the original diagnosis. The additional information learned during a hospital-ization may enable a more accurate assessment of the chronicity of illness, presence of medical disease, degree of mood congru-ence of symptoms, vegetative functioning, mood reactivity, Axis II pathology, alcohol or other substance abuse, and outstanding psychosocial issues than was available on admission. Such data may both help explain the lack of response to ECT and open av-enues to further evaluation or treatment efforts.