Electrical Safety in the Operating Room 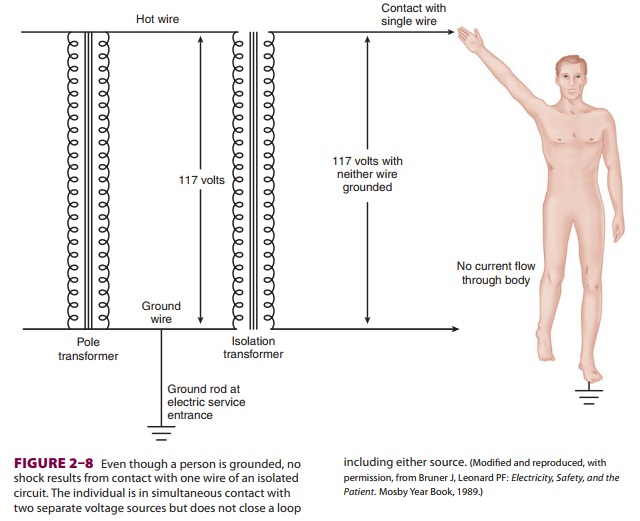 The use of electronic medical equipment subjects patients and hospital personnel to the risk of elec-trocution. Anesthesiologists must have at least a basic understanding of electrical hazards and their prevention.

THE RISK OF ELECTROCUTION

The use of electronic medical equipment subjects patients and hospital personnel to the risk of elec-trocution. Anesthesiologists must have at least a basic understanding of electrical hazards and their prevention.

Body contact with two conductive materials at different voltage potentials may complete a cir-cuit and result in an electrical shock. Usually, one point of exposure is a live 110-V or 240-V conduc-tor, with the circuit completed through a ground contact. For example, a grounded person need con-tact only one live conductor to complete a circuit and receive a shock. The live conductor could be the frame of a patient monitor that has developed a fault to the hot side of the power line. A circuit is now complete between the power line (which is earth grounded at the utility company’s pole-toptransformer) through the victim and back to the ground (Figure 2–6). The physiological effect of electrical current depends on the location, dura-tion, frequency, and magnitude (more accurately, current density) of the shock. 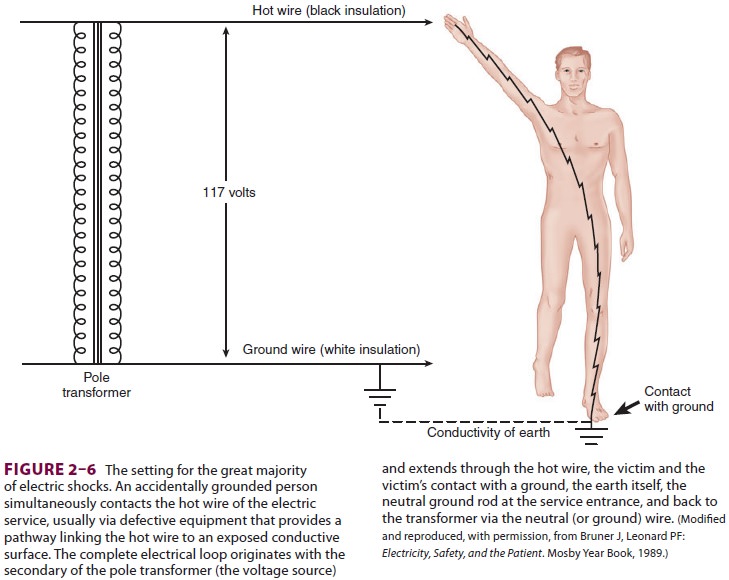 Leakage current is present in all electricalequipment as a result of capacitive coupling, induc-tion between internal electrical components, or defective insulation. Current can flow as a result of capacitive coupling between two conductive bod-ies (eg, a circuit board and its casing) even though they are not physically connected. Some monitors are doubly insulated to decrease the effect of capac-itive coupling. Other monitors are designed to be connected to a low-impedance ground (the safety ground wire) that should divert the current away from a person touching the instrument’s case. The magnitude of such leaks is normally imperceptible to touch (<1 mA, and well below the fibrillation threshold of 100 mA). If the current bypasses the high resistance offered by skin, however, and is applied directly to the heart (microshock), current as low as 100 μA may be fatal. The maximum leakage allowed in operating room equipment is 10 μA.

Cardiac pacing wires and invasive monitor-ing catheters provide a conductive pathway to the myocardium. In fact, blood and normal saline can serve as electrical conductors. The exact amount of current required to produce fibrillation depends on the timing of the shock relative to the vulner-able period of heart repolarization (the T wave on the electrocardiogram). Even small differences in potential between the earth connections of two electrical outlets in the same operating room might place a patient at risk for microelectrocution.

Most patient electrocutions are caused by cur-rent flow from the live conductor of a grounded circuit through the body and back to a ground (Figure 2–6). This would be prevented if everything in the operating room were grounded except the patient. Although direct patient grounds should be avoided, complete patient isolation is not feasible

during surgery. Instead, the operating room power supply can be isolated from grounds by an isolationtransformer (Figure 2–7). 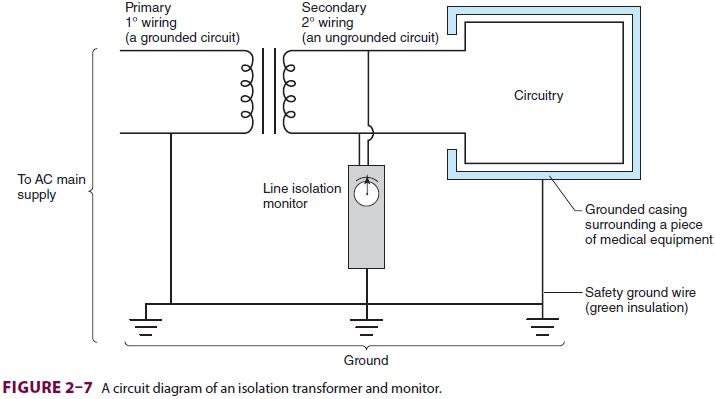 Unlike the utility company’s pole-top trans-former, the secondary wiring of an isolation trans-former is not grounded and provides two live ungrounded voltage lines for operating room equip-ment. Equipment casing—but not the electrical circuits—is grounded through the longest blade of a three-pronged plug (the safety ground). If a live wire is then unintentionally contacted by a grounded patient, current will not flow through the patient since no circuit back to the secondary coil has been completed ( Figure 2–8). 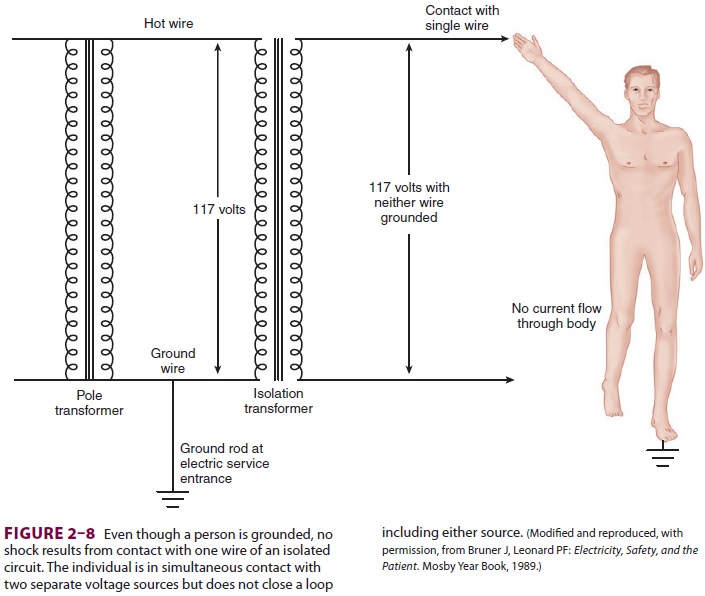 Of course, if both power lines are contacted, a circuit is completed and a shock is possible. In addition, if either power line comes into contactwith a ground through a fault, contact with the other power line will complete a circuit through a grounded patient. To reduce the chance of two coexisting faults, a line isolation monitor measures the potential for current flow fromthe isolated power supply to the ground (Figure 2–9). Basically, the line isolation monitor determines the degree of isolation between the two power wires and the ground and predicts the amount of current that could flow if a second short circuit were to develop. An alarm is activated if an unacceptably high current flow to the ground becomes possible (usually 2 mA or 5 mA), but power is not interrupted unless a ground-fault cir-cuit interrupter is also activated. The latter, a fea-ture of household bathrooms, is usually not installed in locations such as operating rooms, 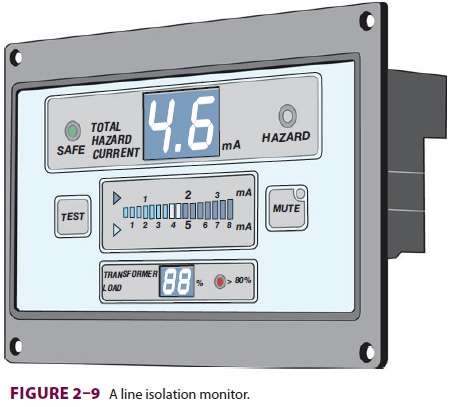 where discontinuation of life support systems (eg, cardiopulmonary bypass machine) is more hazard-ous than the risk of electrical shock. The alarm of the line isolation monitor merely indicates that the power supply has partially reverted to a grounded system. In other words, while the line isolation monitor warns of the existence of a single fault (between a power line and a ground), two faults are required for a shock to occur. Since the line isola-tion monitor alarms when the sum of leakage cur-rent exceeds the set threshold, the last piece of equipment is usually the defective one; however, if this item is life-sustaining, other equipment can be removed from the circuit to evaluate whether the life safety item is truly at fault.

Even isolated power circuits do not provide complete protection from the small currents capable of causing microshock fibrillation. Furthermore, the line isolation monitor cannot detect all faults, such as a broken safety ground wire within a piece of equipment. Despite the overall utility of isolated power systems, they add to construction costs. Their requirement in operating rooms was deleted from the National Electrical Code in 1984, and circuits of newer or remodeled operating rooms may offer less protection from electroshock injury than circuits of a household bathroom.

There are, however, modern equipment designs that decrease the possibility of microelectrocu-tion. These include double insulation of the chas-sis and casing, ungrounded battery power supplies, and patient isolation from equipment-connected grounds by using optical coupling or transformers.

Electrosurgical units (ESUs) generate an ultra-high-frequency electrical current that passes from a small active electrode (the cautery tip) through the patient and exits by way of a large plate elec-trode (the dispersal pad, or return electrode). The high current density at the cautery tip is capable of tissue coagulation or cutting, depending on the electrical waveform. Ventricular fibrillation is pre-vented by the use of ultrahigh electrical frequencies (0.1–3 MHz) compared with line power (50–60 Hz). The large surface area of the low-impedance return electrode avoids burns at the current’s point of exit by providing a low current density (the con-cept of exit is technically incorrect, as the current is alternating rather than direct). The high power levels of ESUs (up to 400 W) can cause inductive coupling with monitor cables, leading to electrical interference.

Malfunction of the dispersal pad may result from disconnection from the ESU, inadequate patient contact, or insufficient conductive gel. In these situations, the current will find another place to exit (eg, electrocardiogram pads or metal parts of the operating table), which may result in a burn (Figure 2–10). Precautions to prevent diathermy burns include proper return electrode placement, avoiding prostheses and bony protuberances, and elimination of patient-to-ground contacts. Current flow through the heart may lead to dysfunction of an implanted cardiac rhythm management device (CRMD). This can be minimized by placing the return electrode as close to the surgical field and as far from the CRMD as practical. 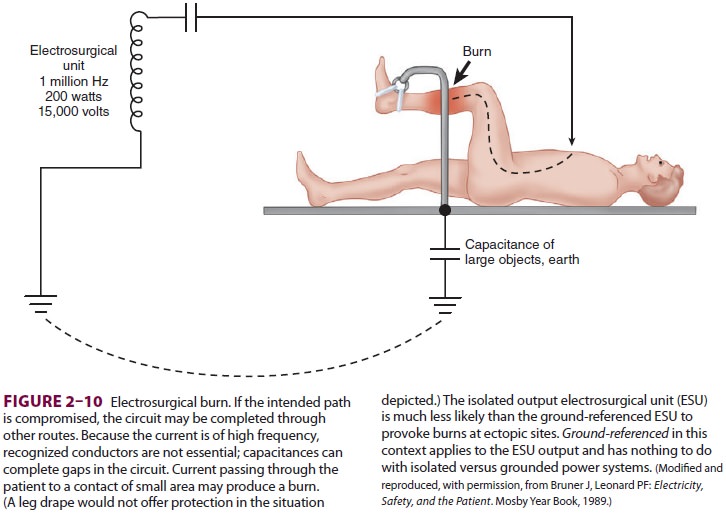 Newer ESUs are isolated from grounds using the same principles as the isolated power supply (isolated output versus ground-referenced units). Because this second layer of protection provides ESUs with their own isolated power supply, the oper-ating room’s line isolation monitor may not detect an electrical fault. Although some ESUs are capable of detecting poor contact between the return elec-trode and the patient by monitoring impedance, many older units trigger the alarm only if the return electrode is unplugged from the machine. Bipolar electrodes confine current propagation to a few mil-limeters, eliminating the need for a return electrode. Because pacemaker and electrocardiogram inter-ference is possible, pulse or heart sounds should be closely monitored when any ESU is used. Automatic implanted cardioversion and defibrillator devices may need to be suspended if monopolar ESU is used and any implanted CRMD should be interrogated after use of a monopolar ESU.