The electrical events in neuronal excitation have been studied especially in the large motor neurons of the anterior horns of the spinal cord.

The electrical events in neuronal excitation have been studied especially in the large motor neurons of the anterior horns of the spinal cord. Therefore, the events described in the next few sections pertain essentially to these neurons. Except for quantitative differences, they apply to most other neurons of the nervous system as well.

Resting Membrane Potential of the Neuronal Soma. Figure 45–8 shows the soma of a spinal motor neuron, indi-cating a resting membrane potential of about -65 mil-livolts. This is somewhat less negative than the -90 millivolts found in large peripheral nerve fibers and in skeletal muscle fibers; the lower voltage is important because it allows both positive and negative control of the degree of excitability of the neuron. That is, decreasing the voltage to a less negative value makes the membrane of the neuron more excitable, whereas increasing this voltage to a more negative value makes the neuron less excitable. This is the basis for the two modes of function of the neuron—either excitation or inhibition. 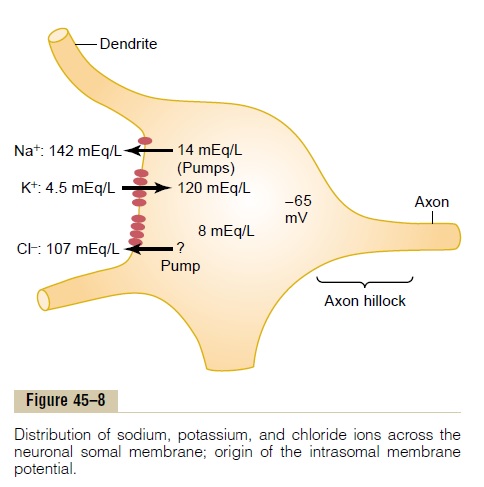 Concentration Differences of Ions Across the Neuronal Somal Membrane. Figure 45–8 also shows the concen-tration differences across the neuronal somal mem-brane of the three ions that are most important for neuronal function: sodium ions, potassium ions, and chloride ions. At the top, the sodium ion concentra-tion is shown to be high in the extracellular fluid (142 mEq/L) but low inside the neuron(14 mEq/L). This sodium concentration gradient is caused by a strong somal membrane sodium pump that continually pumps sodium out of the neuron.

The figure also shows that potassium ion concentra-tion is high inside the neuronal soma (120 mEq/L) but low in the extracellular fluid (4.5 mEq/L). It shows thatthere is a potassium pump (the other half of the Na+-K+ pump) that pumps potassium to the interior.

Let us recall at this point what we learned in Chap-ters 4 and 5 about the relation of ionic concentration differences to membrane potentials. It will be recalled that an electrical potential across the cell membrane can oppose movement of ions through a membrane if the potential is of proper polarity and magnitude. A potential that exactly opposes movement of an ion is called the Nernst potentialfor that ion; the equation for this is the following:

where EMF is the Nernst potential in millivolts on the inside of the membrane. The potential will be negative(-) for positive ions and positive (+) for negative ions.

Now, let us calculate the Nernst potential that will exactly oppose the movement of each of the three sep-arate ions: sodium, potassium, and chloride.

For the sodium concentration difference shown in Figure 45–8, 142 mEq/L on the exterior and 14 mEq/L on the interior, the membrane potential that will exactly oppose sodium ion movement through the sodium channels calculates to be +61 millivolts. However, the actual membrane potential is -65 milli-volts, not +61 millivolts. Therefore, those sodium ions that leak to the interior are immediately pumped back to the exterior by the sodium pump, thus maintaining the -65 millivolt negative potential inside the neuron.

Finally, the chloride ion gradient, 107 mEq/L outside and 8 mEq/L inside, yields a Nernst potential of -70 millivolts inside the neuron, which is only slightly more negative than the actual measured value of -65 milli-volts. Therefore, chloride ions tend to leak very slightly to the interior of the neuron, but those few that do leak are moved back to the exterior, perhaps by an active chloride pump.

Keep these three Nernst potentials in mind and remember the direction in which the different ions tend to diffuse because this information is important in understanding both excitation and inhibition of the neuron by synapse activation or inactivation of ion channels.

Uniform Distribution of Electrical Potential Inside the Soma. The interior of the neuronal soma contains ahighly conductive electrolytic solution, the intracellu-lar fluid of the neuron. Furthermore, the diameter ofthe neuronal soma is large (from 10 to 80 microme-ters), causing almost no resistance to conduction of electric current from one part of the somal interior to another part. Therefore, any change in potential in any part of the intrasomal fluid causes an almost exactly equal change in potential at all other points inside the soma (that is, as long as the neuron is not transmitting an action potential). This is an important principle, because it plays a major role in “summation” of signals entering the neuron from multiple sources, as we shall see in subsequent sections.

Effect of Synaptic Excitation on the Postsynaptic Membrane— Excitatory Postsynaptic Potential. Figure 45–9Ashows theresting neuron with an unexcited presynaptic terminal resting on its surface. The resting membrane potential everywhere in the soma is -65 millivolts. 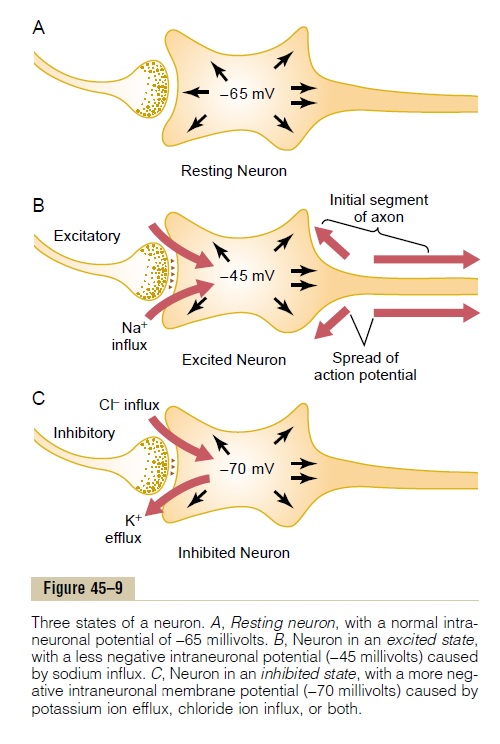 Figure 45–9B shows a presynaptic terminal that has secreted an excitatory transmitter into the cleft between the terminal and the neuronal somal mem-brane. This transmitter acts on the membrane excita-tory receptor to increase the membrane’s permeabilityto Na+. Because of the large sodium concentrationgradient and large electrical negativity inside the neuron, sodium ions diffuse rapidly to the inside of the membrane.

The rapid influx of positively charged sodium ions to the interior neutralizes part of the negativity of the resting membrane potential. Thus, in Figure 45–9B, the resting membrane potential has increased in the posi-tive direction from -65 to -45 millivolts. This positive increase in voltage above the normal resting neuronal potential—that is, to a less negative value—is called the excitatory postsynaptic potential (or EPSP), because if this potential rises high enough in the pos-itive direction, it will elicit an action potential in the postsynaptic neuron, thus exciting it. (In this case, the EPSP is +20 millivolts—that is, 20 millivolts more pos-itive than the resting value.)

However, we must issue a word of warning. Dis-charge of a single presynaptic terminal can never increase the neuronal potential from -65 millivolts all the way up to -45 millivolts. An increase of this magnitude requires simultaneous discharge of many terminals—about 40 to 80 for the usual anterior motor neuron—at the same time or in rapid succession. This occurs by a process calledsummation, which is dis-cussed in detail in the next sections.

Generation of Action Potentials in the Initial Segment of the Axon Leaving the Neuron—Threshold for Excitation.Whenthe EPSP rises high enough in the positive direction, there comes a point at which this initiates an action potential in the neuron. However, the action potential does not begin adjacent to the excitatory synapses.

Once the action potential begins, it travels periph-erally along the axon and usually also backward over the soma. In some instances, it travels backward into the dendrites, too, but not into all of them, because they, like the neuronal soma, have very few voltage-gated sodium channels and therefore frequently cannot generate action potentials at all. Thus, in Figure 45–9B, the threshold for excitation of the neuron is shown to be about -45 millivolts, which represents an EPSP of +20 millivolts—that is, 20 millivolts more pos-itive than the normal resting neuronal potential of -65 millivolts.