More than 50 chemical substances have been proved or postulated to function as synaptic transmitters.

More than 50 chemical substances have been proved or postulated to function as synaptic transmitters. Many of them are listed in Tables 45–1 and 45–2, which give two groups of synaptic transmitters. One group comprises small-molecule, rapidly acting transmitters. The other is made up of a large number of neuropep-tides of much larger molecular size that are usuallymuch more slowly acting. 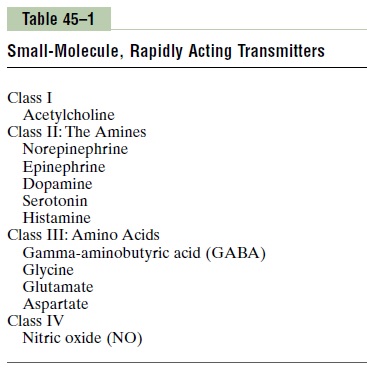 The small-molecule, rapidly acting transmitters are the ones that cause most acute responses of the nervous system, such as transmission of sensory signals to the brain and of motor signals back to the muscles. The neuropeptides, in contrast, usually cause more prolonged actions, such as long-term changes in numbers of neuronal receptors, long-term opening or closure of certain ion channels, and possibly even long-term changes in numbers of synapses or sizes of synapses. 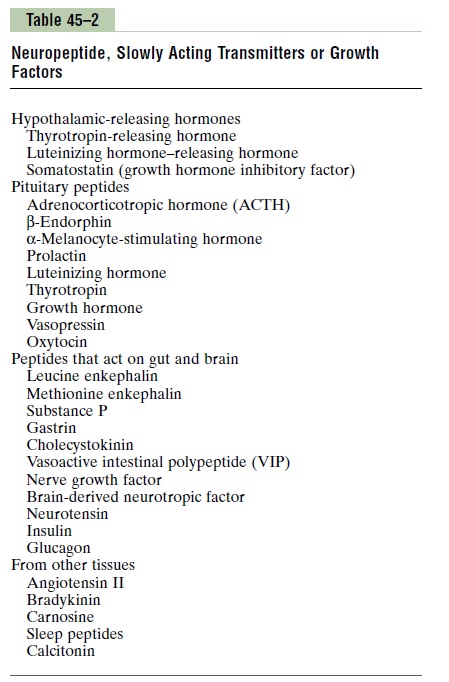 Small-Molecule, Rapidly Acting Transmitters In most cases, the small-molecule types of transmitters are synthesized in the cytosol of the presynaptic ter-minal and are absorbed by means of active transport into the many transmitter vesicles in the terminal. Then, each time an action potential reaches the presy-naptic terminal, a few vesicles at a time release their transmitter into the synaptic cleft. This usually occurs within a millisecond or less by the mechanism described earlier. The subsequent action of the small-molecule type of transmitter on the membrane recep-tors of the postsynaptic neuron usually also occurs within another millisecond or less. Most often the effect is to increase or decrease conductance through ion channels; an example is to increase sodium con-ductance, which causes excitation, or to increase potas-sium or chloride conductance, which causes inhibition.

Recycling of the Small-Molecule Types of Vesicles. The vesi-cles that store and release small-molecule transmitters are continually recycled and used over and over again.After they fuse with the synaptic membrane and open to release their transmitter substance, the vesicle mem-brane at first simply becomes part of the synaptic membrane. However, within seconds to minutes, the vesicle portion of the membrane invaginates back to the inside of the presynaptic terminal and pinches off to form a new vesicle. And the new vesicular membrane still contains appropriate enzyme proteins or transport proteins required for synthesizing and/or concentrating new transmitter substance inside the vesicle.

Acetylcholine is a typical small-molecule transmit-ter that obeys the principles of synthesis and release stated earlier.This transmitter substance is synthesized in the presynaptic terminal from acetyl coenzyme A and choline in the presence of the enzymecholineacetyltransferase. Then it is transported into its specificvesicles. When the vesicles later release the acetyl-choline into the synaptic cleft during synaptic neu-ronal signal transmission, the acetylcholine is rapidly split again to acetate and choline by the enzyme cholinesterase, which is present in the proteoglycanreticulum that fills the space of the synaptic cleft. And then again, inside the presynaptic terminal, the vesi-cles are recycled; choline is actively transported back into the terminal to be used again for synthesis of new acetylcholine.

Characteristics of Some of the More Important Small-Molecule Transmitters. The most important of the small-moleculetransmitters are the following.

Norepinephrine is secreted by the terminals of manyneurons whose cell bodies are located in the brain stem and hypothalamus. Specifically, norepinephrine-secreting neurons located in the locus ceruleus in the pons send nerve fibers to widespread areas of the brain to help control overall activity and mood of the mind, such as increasing the level of wakefulness. In most of these areas, norepinephrine probably activates excita-tory receptors, but in a few areas, it activates inhibitory receptors instead. Norepinephrine is also secreted by most postganglionic neurons of the sympathetic nervous system, where it excites some organs but inhibits others.

Dopamine is secreted by neurons that originate inthe substantia nigra. The termination of these neurons is mainly in the striatal region of the basal ganglia. The effect of dopamine is usually inhibition.

Glycine is secreted mainly at synapses in thespinal cord. It is believed to always act as an inhibitory transmitter.

GABA (gamma-aminobutyric acid) is secreted bynerve terminals in the spinal cord, cerebellum, basal ganglia, and many areas of the cortex. It is believed always to cause inhibition.

Glutamate is secreted by the presynaptic terminalsin many of the sensory pathways entering the central nervous system, as well as in many areas of the cere-bral cortex. It probably always causes excitation.

Serotonin is secreted by nuclei that originate in themedian raphe of the brain stem and project to many brain and spinal cord areas, especially to the dorsal horns of the spinal cord and to the hypothalamus. Serotonin acts as an inhibitor of pain pathways in the cord, and an inhibitor action in the higher regions of the nervous system is believed to help control the mood of the person, perhaps even to cause sleep.

Nitric oxide is especially secreted by nerve terminalsin areas of the brain responsible for long-term behav-ior and for memory. Therefore, this transmitter system might in the future explain some behavior and memory functions that thus far have defied under-standing. Nitric oxide is different from other small-molecule transmitters in its mechanism of formation in the presynaptic terminal and in its actions on the postsynaptic neuron. It is not preformed and stored in vesicles in the presynaptic terminal as are other trans-mitters. Instead, it is synthesized almost instantly as needed, and it then diffuses out of the presynaptic terminals over a period of seconds rather than being released in vesicular packets. Next, it diffuses into postsynaptic neurons nearby. In the postsynaptic neuron, it usually does not greatly alter the membrane potential but instead changes intracellular metabolic functions that modify neuronal excitability for seconds, minutes, or perhaps even longer.

The protein molecules then enter the spaces inside the endoplasmic reticulum of the cell body and subse-quently inside the Golgi apparatus, where two changes occur: First, the neuropeptide-forming protein is enzy-matically split into smaller fragments, some of which are either the neuropeptide itself or a precursor of it. Second, the Golgi apparatus packages the neuropep-tide into minute transmitter vesicles that are released into the cytoplasm. Then the transmitter vesicles are transported all the way to the tips of the nerve fibers by axonal streaming of the axon cytoplasm, traveling at the slow rate of only a few centimeters per day. Finally, these vesicles release their transmitter at the neuronal terminals in response to action potentials in the same manner as for small-molecule transmitters. However, the vesicle is autolyzed and is not reused.

Because of this laborious method of forming the neuropeptides, much smaller quantities of them are usually released than of the small-molecule transmit-ters. This is partly compensated for by the fact that the neuropeptides are generally a thousand or more times as potent as the small-molecule transmitters. Another important characteristic of the neuropeptides is that they often cause much more prolonged actions. Some of these actions include prolonged closure of calcium channels, prolonged changes in the metabolic machin-ery of cells, prolonged changes in activation or deacti-vation of specific genes in the cell nucleus, and/or prolonged alterations in numbers of excitatory or inhibitory receptors. Some of these effects last for days, but others perhaps for months or years. Our knowledge of the functions of the neuropeptides is only beginning to develop.