Figure 45–5 shows a typical anterior motor neuron in the anterior horn of the spinal cord.

Physiologic Anatomy of the Synapse

Figure 45–5 shows a typical anterior motor neuron in the anterior horn of the spinal cord. It is composed of three major parts: thesoma, which is the main body of the neuron; a single axon, which extends from the soma into a peripheral nerve that leaves the spinal cord; and the dendrites, which are great numbers of branching projections of the soma that extend as much as 1 millimeter into the surrounding areas of the cord. 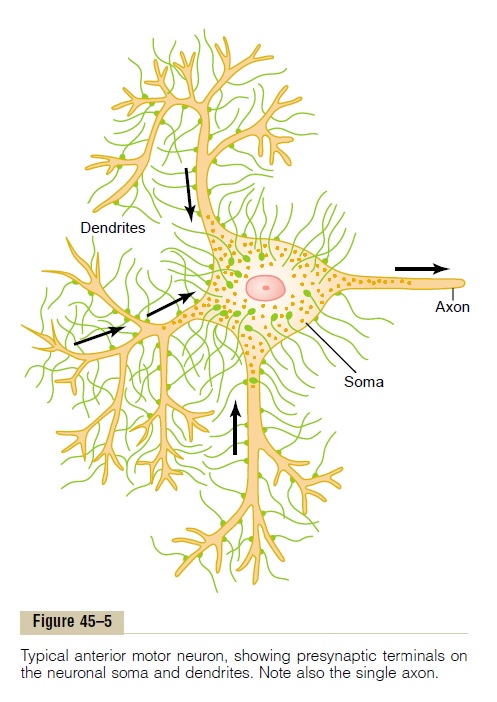 Neurons in other parts of the cord and brain differ from the anterior motor neuron in (1) the size of the cell body; (2) the length, size, and number of dendrites, ranging in length from almost zero to many centime-ters; (3) the length and size of the axon; and (4) the number of presynaptic terminals, which may range from only a few to as many as 200,000. These differ-ences make neurons in different parts of the nervous system react differently to incoming synaptic signals and, therefore, perform many different functions.

Figure 45–6 illustrates the basic structure of a synapse, showing a single presynaptic terminal on the membrane surface of a postsomatic neuron.The presy-naptic terminal is separated from the postsynaptic neuronal soma by a synaptic cleft having a width usually of 200 to 300 angstroms. The terminal has two internal structures important to the excitatory or inhibitory function of the synapse: the transmitter vesi-cles and the mitochondria. The transmitter vesiclescontain the transmitter substance that, when released into the synaptic cleft, either excites or inhibits the postsynaptic neuron—excites if the neuronal mem-brane contains excitatory receptors, inhibits if the membrane contains inhibitory receptors. The mito-chondria provide adenosine triphosphate (ATP), which in turn supplies the energy for synethesizing new transmitter substance. 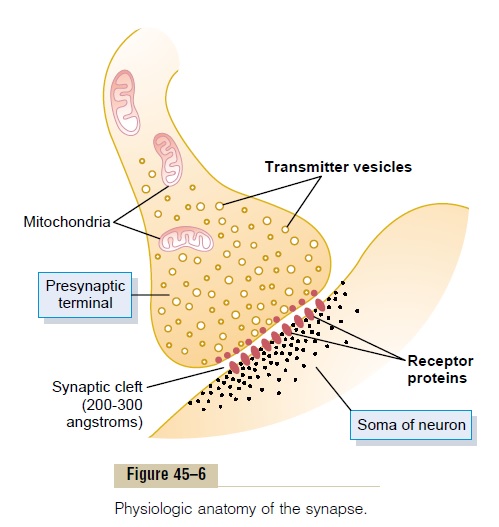 When an action potential spreads over a presynap-tic terminal, depolarization of its membrane causes a small number of vesicles to empty into the cleft. The released transmitter in turn causes an immediate change in permeability characteristics of the postsy-naptic neuronal membrane, and this leads to excitation or inhibition of the postsynaptic neuron, depending on the neuronal receptor characteristics.

The membrane of the presynaptic terminal is called the presynaptic membrane. It contains large numbers of voltage-gated calcium channels. When an action potential depolarizes the presynaptic membrane, these calcium channels open and allow large numbers of calcium ions to flow into the terminal. The quantity of transmitter substance that is then released from the terminal into the synaptic cleft is directly related to the number of calcium ions that enter. The precise mechanism by which the calcium ions cause this release is not known, but it is believed to be the following.

When the calcium ions enter the presynaptic termi-nal, it is believed that they bind with special protein molecules on the inside surface of the presynaptic membrane, called release sites. This binding in turn causes the release sites to open through the mem-brane, allowing a few transmitter vesicles to release their transmitter into the cleft after each single action potential. For those vesicles that store the neurotrans-mitter acetylcholine, between 2000 and 10,000 mole-cules of acetylcholine are present in each vesicle, and there are enough vesicles in the presynaptic terminal to transmit from a few hundred to more than 10,000 action potentials.

Action of the Transmitter Substance on the Postsynaptic Neuron—Function of “Receptor Proteins” The membrane of the postsynaptic neuron contains large numbers of receptor proteins, also shown in Figure 45–6. The molecules of these receptors have two important components: (1) a binding component that protrudes outward from the membrane into the synaptic cleft—here it binds the neurotransmitter coming from the presynaptic terminal—and (2) an ionophore component that passes all the way throughthe postsynaptic membrane to the interior of the post-synaptic neuron. The ionophore in turn is one of two types: (1) an ion channel that allows passage of speci- fied types of ions through the membrane or (2) a “second messenger” activator that is not an ion channelbut instead is a molecule that protrudes into the cell cytoplasm and activates one or more substances inside the postsynaptic neuron. These substances in turn serve as “second messengers” to increase or decrease specific cellular functions.

Ion Channels. The ion channels in the postsynaptic neu-ronal membrane are usually of two types: (1) cationchannels that most often allow sodium ions to passwhen opened, but sometimes allow potassium and/or calcium ions as well, and (2) anion channels that allow mainly chloride ions to pass but also minute quantities of other anions.

The cation channels that conduct sodium ions are lined with negative charges. These charges attract the positively charged sodium ions into the channel when the channel diameter increases to a size larger than that of the hydrated sodium ion. But those same neg-ative charges repel chloride ions and other anions and prevent their passage.

For the anion channels, when the channel diameters become large enough, chloride ions pass into the channels and on through to the opposite side, whereas sodium, potassium, and calcium cations are blocked, mainly because their hydrated ions are too large to pass.

“Second  Messenger”  System  in  the  Postsynaptic  Neuron. Many functions of the nervous system—for instance, the process of memory—require prolonged changes in neurons for seconds to months after the initial trans-mitter substance is gone. The ion channels are not suit-able for causing prolonged postsynaptic neuronal changes because these channels close within millisec-onds after the transmitter substance is no longer present. However, in many instances, prolonged post-synaptic neuronal excitation or inhibition is achieved by activating a “second messenger” chemical system inside the postsynaptic neuronal cell itself, and then it is the second messenger that causes the prolonged effect.

There are several types of second messenger systems. One of the most common types uses a group of proteins called G-proteins. Figure 45–7 shows in the upper left corner a membrane receptor protein. A G-protein is attached to the portion of the receptor that protrudes into the interior of the cell. The G-protein in turn consists of three components: an alpha (a) component that is the activatorportion of the G-protein, and beta (b) and gamma (g) compo-nents that are attached to the alpha component and also to the inside of the cell membrane adjacent to the receptor protein. On activation by a nerve impulse, the alpha portion of the G-protein separates from the beta and gamma portions and then is free to move within the cytoplasm of the cell. 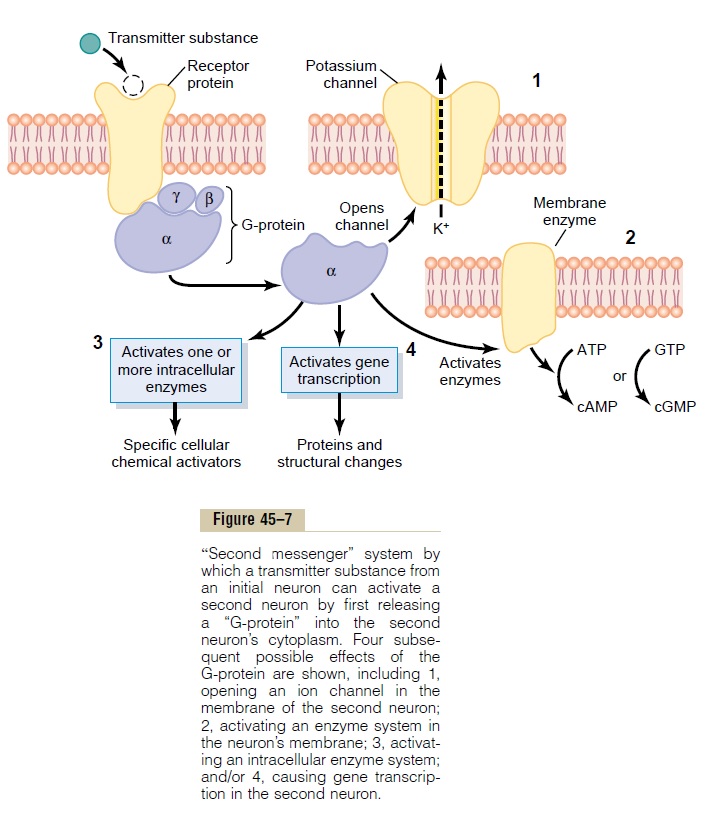 Inside the cytoplasm, the separated alpha compo-nent performs one or more of multiple functions, depending on the specific characteristic of each type of neuron. Shown in Figure 45–7 are four changes that can occur. They are as follows:

1.     Opening specific ion channels through the postsynaptic cell membrane. Shown in the upperright of the figure is a potassium channel that is opened in response to the G-protein; this channel often stays open for a prolonged time, in contrast to rapid closure of directly activated ion channels that do not use the second messenger system.

4.     Activation of gene transcription. This is one of themost important effects of activation of the second messenger systems because gene transcription can cause formation of new proteins within the neuron, thereby changing its metabolic machinery or its structure. Indeed, it is well known that structural changes of appropriately activated neurons do occur, especially in long-term memory processes.

It is clear that activation of second messenger systems within the neuron, whether they be of the G-protein type or of other types, is extremely impor-tant for changing the long-term response characteris-tics of different neuronal pathways. We will return to this subject in more detail when we discuss memory functions of the nervous system.

The different molecular and membrane mechanisms used by the different receptors to cause excitation or inhibition include the following.

1.Opening of sodium channels to allow large numbers of positive electrical charges to flow to the interior of the postsynaptic cell. This raises theintracellular membrane potential in the positive direction up toward the threshold level for excitation. It is by far the most widely used means for causing excitation.

2.Depressed conduction through chloride or potassium channels, or both. This decreases thediffusion of negatively charged chloride ions to the inside of the postsynaptic neuron or decreases the diffusion of positively charged potassium ions to the outside. In either instance, the effect is to make the internal membrane potential more positive than normal, which is excitatory.

2.Increase in conductance of potassium ions out of the neuron. This allows positive ions to diffuse tothe exterior, which causes increased negativity inside the neuron; this is inhibitory.