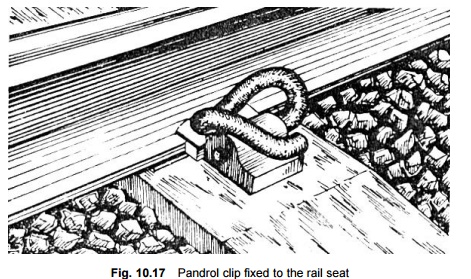 The primary purpose of a fastening is to fix the rail to the sleeper. The rail may be fixed either directly or indirectly with the help of fastenings. In the process, the fastening gets subjected to strong vertical, lateral, and longitudinal forces.

The primary purpose of a fastening is to fix the rail to the sleeper. The rail may be fixed either directly or indirectly with the help of fastenings. In the process, the fastening gets subjected to strong vertical, lateral, and longitudinal forces. The forces, which are predominantly dynamic, increase rapidly with increasing loads and speeds. In addition, vibrations are generated by moving loads mainly on account of geometrical irregularities in the track and due to the forces set up by the imbalance in the rolling stock. The traditional rigid fastening, which so far has fulfilled its task to a certain extent, is no longer able to effectively meet the present challenge of heavy dynamic forces and, therefore, becomes loose under the impact of high-frequency vibrations of the order of 800 to 1000 cycles per second, even at a moderate speed of 100 kmph. In fact, this type of fastening is unable to hold the rail to the sleeper firmly for a satisfactory length of time because of the constant pressure exerted by moving loads. Due to the shocks and vibrations caused by moving loads, the rigid fastenings become loose, an interplay between the components of the track develops, track parameters get affected, and rapid deterioration of the track begins. To solve these problems a fastening which could safeguard track parameters and dampen the vibrations is required. This has led to the development of the elastic fastening.

1 Requirements of an Elastic Fastening

The ideal elastic fastening should meet the following requirements.

(a)  It should hold the gauge firmly in place.

(b) It should have an adequate toe load which should not reduce under service.

(c)  It should provide sufficient elasticity to absorb the vibrations and shocks caused by moving loads.

(d) It should help in keeping the track well maintained.

(e)  It should offer adequate resistance to lateral forces in order to maintain the stability of the track.

(g)  It should be of the 'fit and forget' type so that it requires least maintenance.

(h) It should not lose its properties even when it is used over and over.

(i)    It should have as few parts as possible and these parts should be easy to manufacture, lay, and maintain.

(j)    It should be irremoveable so that once fitted it cannot be taken out and as such it should not be vulnerable to sabotage or theft.

(k) It should be universally applicable so that it can be used with wooden, steel, or concrete sleepers.

An elastic fastening is usually in the form of a clip. Various types of clips have been developed over the years; these are discussed here in detail.

The Pandrol PR 401 clip (also known as an elastic rail clip) (Fig. 10.15) is a standard type of elastic fastening used on Indian Railways, earlier manufactured by Messrs Guest, Keens & Williams. It is a 'fit and forget' type of fastening that requires very little attention towards its maintenance. The clip is made of a silico-manganese spring steel bar with a diameter of 20.6 mm and is heat treated. It exerts a toe load of 710 kg for a nominal deflection of 11.4 mm. The toe load is quite adequate to ensure that no relative movement is possible between the rail and the sleeper. Pandrol clips can be driven with the help of an ordinary 4-pound hammer and require no special tools. In order to ensure that the correct toe load is exerted, the Pandrol clip should be driven to such an extent that the outer leg of the clip is flush with the outer face of the CI insert. Figure 10.16 shows an isometric view of the clip fixed on the rail while Fig. 10.17 shows the clip fixed to a rail seat. 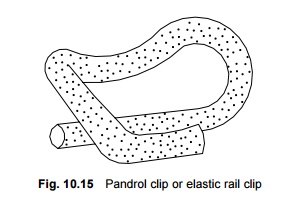 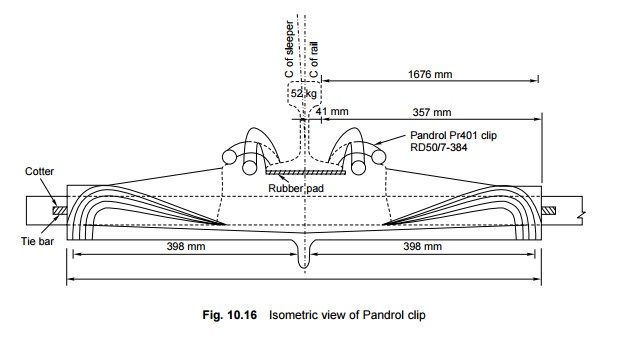 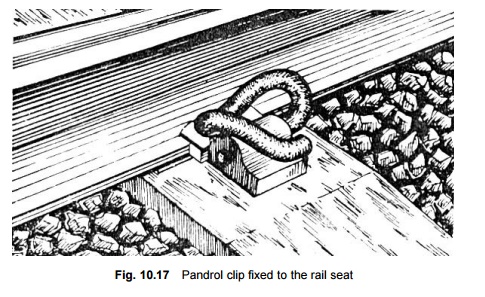 The Pandrol or elastic clip can be fixed on wooden, steel, cast iron, and concrete sleepers with the help of a base plate and some other ancillary fittings. Pandrol clips are the most widely used clips with concrete sleepers on Indian Railways. Therefore, it becomes imperative that a detailed account of the same be given.

Concrete sleepers with Pandrol/elastic clips In the case of concrete sleepers, malleable cast iron inserts are punched directly into the sleepers during manufacture. The Pandrol clip is fixed in the holes of the CI insert. A 4.5-mm-thick grooved rubber pad is provided under the rail seat to make it doubly elastic. Insulated liners provide the necessary insulation (Fig. 10.18). 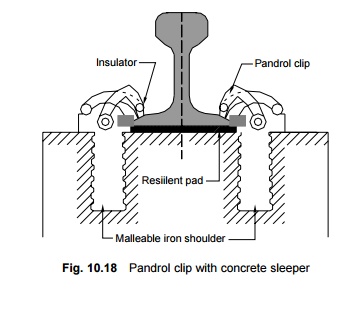 1.  Their use makes the adjustment of the gauge impossible.

2.  The Pandrol clip has a point contact and this causes indentation on the foot of the rail due to a heavy toe load and a small contact area.

3.  It does not provide enough safeguard from theft or sabotage because it can easily be taken out using an ordinary hammer.

4.  It gets caught inside the malleable cast iron (MCI) insert during service.

Toe load measuring device This device consists of a lever made of silico- manganese steel and is designed to grip the Pandrol rail slip toe. It is used in conjunction with a suitable block which is fitted on the rail head and acts as the fulcrum. To operate the device, a force is gradually applied to the handle and the reading of the dial gauge at which the Pandrol clip toe is just lifted above the rail seat is noted. The reading of the dial gauge indicates the toe load, which is pre-calibrated in the laboratory.

The IRN 202 clip (Fig. 10.19) is an elastic fastening designed by RDSO to suit two-block reinforced cement concrete (RCC) sleepers. The clip is manufactured by the Republic Forge of Hyderabad using a silico-manganese spring steel bar of diameter of 18 mm, suitably heat treated to Brinel hardness number (BHN) 375- 415. The assembly is designed for a toe load of 1000 kg and a toe deflection of 18.5 mm. The assembly has a creep resistance generally equal to 50% of the total toe load of the rail. 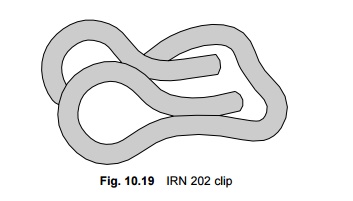 The clip essentially consists of outer legs connected by means of two coils. It is held in position by a bolt and clamp arrangement. The clamp is made up of the same material as the clip. The bolt, which has a diameter of 19 mm, is made of mild steel. The clip holds the track gauge easily and effectively. The inner legs rest against the bottom flange of the rail to provide an elastic gauge check. After the clip is placed in position, the nut is tightened to depress the inner legs with respect to the toe till these touch the sleeper surface. This stage depends on the designed toe load and the toe load deflection. At this stage, it is not possible to tighten the nut any further. The nut will remain in position for quite some time, as the tension in the bolt does not vary much during summer.

The advantage of the IRN 202 clip is that the rail can be changed without removing the fastening simply by loosening the bolt and pushing the rail out. However, the IRN 202 clip suffers from the following drawbacks.

1.  The corrosion of the highly stressed part (heel) of the assembly can lead to the development cracks.

2.  It is not a fit and forget type of fastening and requires frequent attention such as oiling and tightening of the nuts to maintain the required toe load.

3.  It is a comparatively costlier and heavier clip.

Lock spikes (Fig. 10.20) are manufactured by Messrs Lock Spike Ltd, London for use with wooden sleepers. The lock spike type LG-20 has been tried on Indian Railways. It is a 165-mm- (6.5-in.) long spike with a round section of diameter 16 mm (5/8"). The sizes of the holes bored into the sleeper are 14 mm and 12 mm for hard wood, and soft wood respectively. The spike, which appears to have a good future, is still under trial. 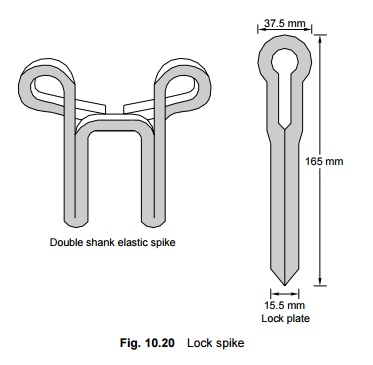 A large number of spring steel clips (Fig. 10.21), supplied mostly by Messrs Guest, Keens & Williams, have been tried on Indian Railways. The assembly consists of a double elastic fastening used on a prestressed concrete sleeper. In this assembly, the rail rests on a grooved rubber pad and is held vertically by a pair of spring clips at each rail seat. The clip is pressed with the help of a nut tightened on a 22-mm bolt, which is inserted from the underside of the sleeper. The clip is manufactured using EN-48 steel. The nut is tightened to a torque of 100 ft lb to obtain a resistance of 1 t per pair of clips. The clip is still in its experimental stage on Indian Railways. 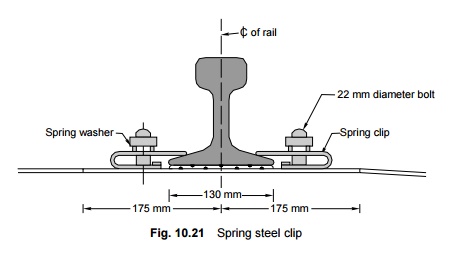 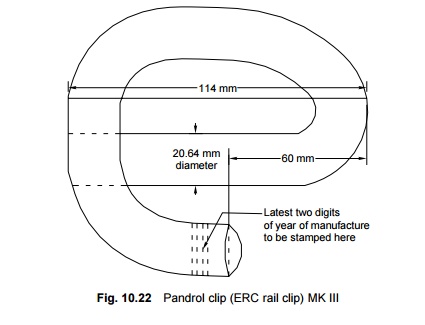 Limitations of elastic rail clip The elastic clip (or Pandrol clip) presently being used on Indian Railways has the following limitations.

2.  The ERC can be easily removed from the track.

3.  The ERC gets jammed/rusted in the insert and tends to lose the designed toe load.

The Herbert Meir (HM) fastening (Fig. 10.23) basically consists of four coach screws which are tightened against the plastic dowels of the PRC sleepers and press the HM clip assembly to give the desired toe load. Each clip weighs about 510 g and can give a toe load of about 1 t. The gauge is maintained with the help of an angled guide plate. A thin insulated shim is placed between the angled plate and the concrete sleepers. A grooved rubber pad is placed below the seat to provide the necessary dampening effect and resistance to the lateral movement of rails. 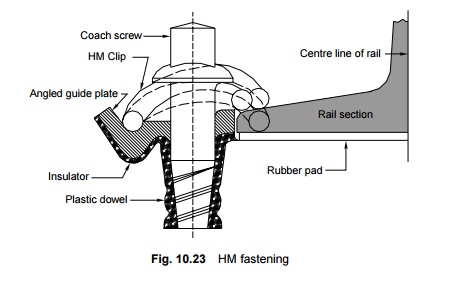 The HM fastening can be used for 52-kg as well as 60-kg rails by using a suitable size of angled guide plates and insulating shims.