When current flows in a circuit it exhibits various effects. The main effects are heating, chemical and magnetic effects.

When current flows in a circuit it exhibits various effects. The main effects are heating, chemical and magnetic effects.

When the flow of current is ‘resisted’ generally heat is produced. is is because the electrons while moving in the wire or resistor su er resistance. Work has to be done to overcome the resistance which is converted in to heat energy. is conversion of electrical energy in to heating energy is called ‘Joule heating’ as this effect was extensively studied by the scientist Joule. is forms the principle of all electric heating appliances like iron box, water heater, toaster etc. Even connecting wires o er a small resistance to the flow of current. at is why almost all electrical appliances including the connecting wires feel warm when used in an electric circuit. 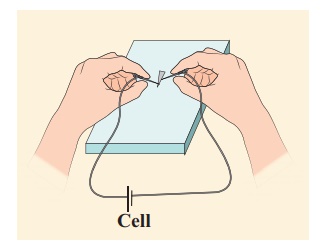 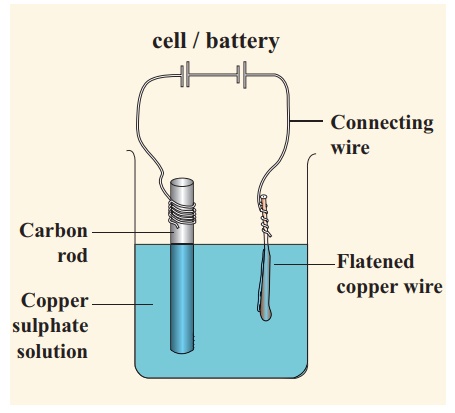 So far we have come across the cases in which only the electrons can conduct electricity. But, here when current passes through electrolyte like copper sulphate solution, both the electron and the positive copper ion conduct electricity. The process of conduction of electric current through solutions is called ‘electrolysis’. The solution through which the electricity passes is called ‘electrolyte’. The positive terminal inserted in to the solution is called ‘anode’ and the negative terminal ‘cathode’. In the above experiment, copper wire is anode and carbon rod is cathode.

A wire or a conductor carrying current develops a magnetic field perpendicular to the direction of the flow of current. is is called magnetic effect of current. The discovery of the scientist Oersted and the ‘right hand thumb rule’ are detailed in the chapter on Magnetism and Electromagnetism in this book. 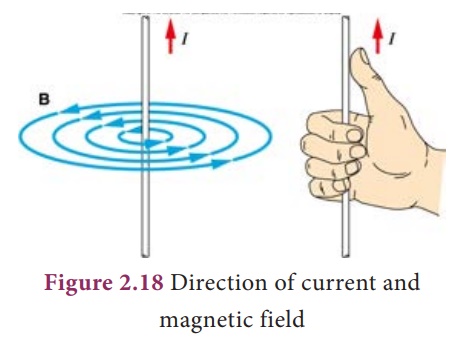