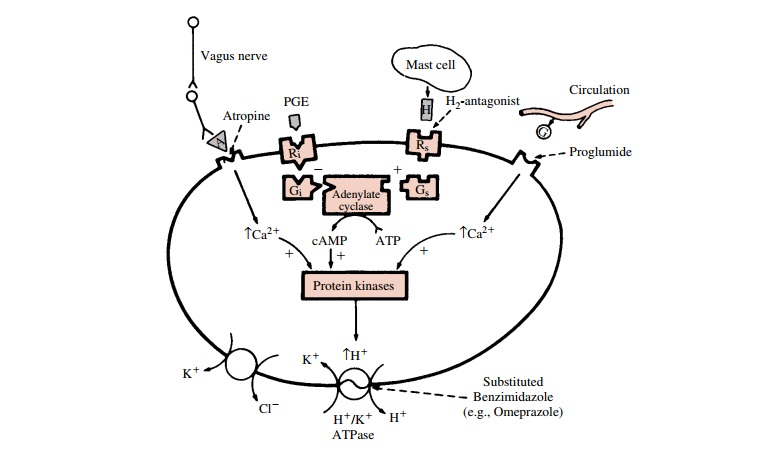 Functionally, the gastric mucosa is divided into three ar-eas of secretion.

Functionally, the gastric mucosa is divided into three ar-eas of secretion. The cardiac gland area secretes mucus and pepsinogen. The oxyntic (parietal) gland area, which corresponds to the fundus and body of the stomach, se-cretes hydrogen ions, pepsinogen, and bicarbonate. The pyloric gland area in the antrum secretes gastrin and mucus.

The parietal cells secrete H+ in response to gastrin, cholinergic, and histamine stimulation (Fig. 40.1). Both cholinergic- and gastrin-induced types of stimulation bring about a receptor-mediated rise in intracellular cal-cium, an activation of intracellular protein kinases, and eventually an increased activity of the H+ –K+ pump leading to acid secretion into the gastric lumen. Follow-ing histamine stimulation, a guanine nucleotide–binding protein (Gs) activates adenylyl cyclase, leading to an in-crease in intracellular levels of the second messenger, cyclic adenosine monophosphate (cAMP). Activation of cAMP-dependent protein kinases initiates the stimu-lation of the H+ –K+ pump. 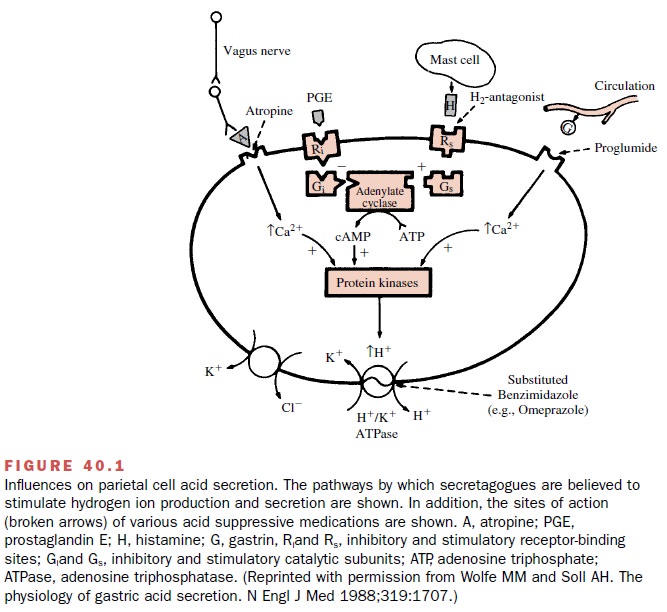 Gastric acid secretion is inhibited in the presence of acid itself. A negative feedback occurs when the pH ap-proaches 2.5 such that further secretion of gastrin is in-hibited until the pH rises. Ingested carbohydrates and fat also inhibit acid secretion after they reach the intes-tines; several hormonal mediators for this effect have been proposed. The secretion of pepsinogen appears to parallel the secretion of H+ , while the patterns of secre-tion of mucus and bicarbonate have not been well char-acterized.

The integrity of the mucosal lining of the stomach and proximal small bowel is in large part determined by the mucosal cytoprotection provided by mucus and bi-carbonate secretion from the gastric and small bowel mucosa. Mucus retards diffusion of the H+ from the gas-tric lumen back into the gastric mucosal surface. In ad-dition, the bicarbonate that is secreted into the layer be-tween the mucus and epithelium permits a relatively high pH to be maintained in the region next to the mu-cosal surface. If any H+ does diffuse back to the level of

the mucosal surface, both the local blood supply and the ability of the local cells to buffer this ion will ultimately determine whether peptic ulceration will occur. With duodenal and gastric peptic ulcer disease, a major causative cofactor is the presence of gastric Helico-bacter pylori infection.

The rationale for the use of antacids in peptic ulcer dis-ease lies in the assumption that buffering of H+ in the stomach permits healing. The use of both low and high doses of antacids is effective in healing peptic ulcers as compared with placebo. Healing rates are comparable with those observed after the use of histamine (H2) blocking agents. The buffering agents in the various antacid preparations consist of combinations of ingredi-ents that include sodium bicarbonate, calcium carbon-ate, magnesium hydroxide, and aluminum hydroxide. If diarrhea occurs or if there is renal failure, a magnesium-based preparation should be discontinued. The agents are generally safe, but some patients resist because some of the formulations are unpalatable and expensive.

A variety of adverse effects have been reported fol-lowing the use of antacids. If sodium bicarbonate is ab-sorbed, it can cause systemic alkalization and sodium overload. Calcium carbonate may induce hypercalcemia and a rebound increase in gastric secretion secondary to the elevation in circulating calcium levels. Magnesium hydroxide may produce osmotic diarrhea, and the ex-cessive absorption of Mg in patients with renal failure may result in central nervous system toxicity. Aluminum hydroxide is associated with constipation; serum phos-phate levels also may become depressed because of phosphate binding within the gut. The use of antacids in general may interfere with the absorption of a number of antibiotics and other medications.

The histamine receptor antagonists (H2 blockers) mar-keted in the United States are cimetidine (Tagamet), ranitidine (Zantac), famotidine (Pepcid), and nizatidine (Axid). These agents bind to the H2-receptors on the cell membranes of parietal cells and prevent histamine-induced stimulation of gastric acid secretion. After pro-longed use, down-regulation of receptor production oc-curs, resulting in tolerance to these agents. H2-blockers are approved for the treatment of gastroesophageal re-flux disease, acute ulcer healing, and post–ulcer healing maintenance therapy. Although there are substantial differences in their relative potency, 70 to 85% of duo-denal ulcers are healed during 4 to 6 weeks of therapy with any of these agents. The incidence of healing of gastric ulceration after 6 to 8 weeks of therapy ap-proaches 60 to 80% with the use of cimetidine or raniti-dine. Since nocturnal suppression of acid secretion is particularly important in healing, nighttime-only dosing can be used. Most are available in low-dose over-the-counter formulations.

Cimetidine, the first released H2-blocker, like hista-mine, contains an imidazole ring structure. It is well ab-sorbed following oral administration, with peak blood levels 45 to 90 minutes after drug ingestion. Blood lev-els remain within therapeutic concentrations for ap-proximately 4 hours after a 300-mg dose. Following oral administration, 50 to 75% of the parent compound is excreted unchanged in the urine; the rest appears pri-marily as the sulfoxide metabolite.

Cimetidine may infrequently cause diarrhea, nau-sea, vomiting, or mental confusion. A rare association with granulocytopenia, thrombocytopenia, and pancy-topenia has been reported. Gynecomastia has been demonstrated in patients receiving either high-dose or long-term therapy. This occurs because cimetidine has a weak antiestrogen effect. Since cimetidine is partly me-tabolized by the cytochrome P450 system, coadminis-tered drugs such as the benzodiazepines, theophylline, and warfarin, which are also metabolized by this system, may accumulate if their dosage is not adjusted.

Ranitidine is well absorbed after oral administra-tion, with a peak plasma level achieved 1 to 3 hours af-ter ingestion. Elimination is by renal (25%) and hepatic (50%) routes. The half-life of elimination is 2.5 to 3.0 hours. Nizatidine is the newest H2-receptor antagonist. Similar to ranitidine, it has a relative potency twice that of cimetidine. About 90% of an oral dose is absorbed, with a peak plasma concentration occurring after 0.5 to 3 hours; inhibition of gastric secretion is present for up to 10 hours. The elimination half-life is 1 to 2 hours, and more than 90% of an oral dose is excreted in the urine. Famotidine has an onset of effect within 1 hour after oral administration, and inhibition of gastric secretion is present for the next 10 to 12 hours. It is the most potent H2-blocker. Elimination is by renal (65–70%) and he-patic (30–35%) routes. Ranitidine, famotidine, and niza-tidine do not alter the microsomal cytochrome P450 metabolism of other drugs, nor do they cause gyneco-mastia. A reduction in dosage of any of the H2-blockers is recommended in the presence of renal insufficiency.

The proton pump inhibitors available in the United States are omeprazole (Prilosec), lansoprazole (Prevacid), pan-toprazole (Protonix), rabeprazole (Aciphex), and es-omeprazole (Nexium). These are substituted benzimida-zole prodrugs, which accumulate on the luminal side of parietal cells’ secretory canaliculi. They become acti-vated by acid transport and then bind covalently to the actual H+ –K ATPase enzymes (proton pumps) irreversibly blocking them. These drugs markedly inhibit gastric acid secretion. New proton pumps are continu-ously formed, and thus no tolerance develops. Peptic ulcers and erosive esophagitis that are resistant to other therapies will frequently heal when these agents are used. The proton pump inhibitors are also used to treat patients with Zollinger-Ellison syndrome, which is the result of a gastrin-hypersecreting neuroendocrine tumor.

The prodrugs are unstable in the presence of acid and therefore must be administered as an enteric-coated preparation or as a buffered suspension. Pantoprazole is also available in an intravenous formulation. The most commonly reported side effects are diarrhea and headache. Hypergastrinemia has been noted as a reac-tion to the marked reduction in acid secretion. Gastric carcinoid tumors have developed in rats but not in mice or in human volunteers, even after long-term use.