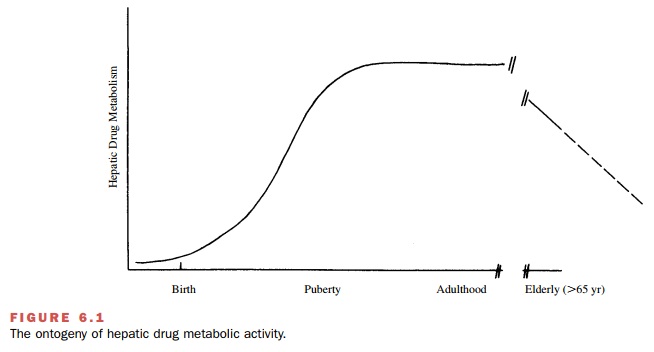 The elderly (individuals over 65 years of age) constitute more than 13% of the population.

The elderly (individuals over 65 years of age) constitute more than 13% of the population. This figure is increas-ing steadily and is expected to reach 50 million by the year 2020. This segment of our society is the most highly drug-treated and accounts for about 25% of prescrip-tion drugs dispensed. The average Medicare patient in an acute-care hospital receives approximately 10 differ-ent drugs daily, and this translates into a higher inci-dence of adverse drug reactions in geriatric patients than in the general population.

Chronological aging may not necessarily be an accu-rate index of biological aging, which is the result of many genetic and environmental factors. While most 20-year-olds have a similar response to a given drug, it is difficult to predict the response among 80-year-olds. A clear relationship between the appearance of untoward effects to drugs and aging has been demonstrated only for about 10 drugs. For some 90 other drugs in common clinical use, age alone was not a major determinant of clinical toxicity. It is apparent that an increase in life span is accompanied by an increase in chronic illnesses such as hypertension, congestive heart failure, arthritis, and diabetes. The pharmacological management of these conditions, especially when the same person has several diseases, becomes increasingly complex.

Age-related alterations in pharmacokinetics (ab-sorption, distribution, metabolism, and excretion) have received considerable attention. Thus, physiological changes in elderly patients, when taken together, may contribute to impairments in drug clearance in this seg-ment of the population (Table 6.5). 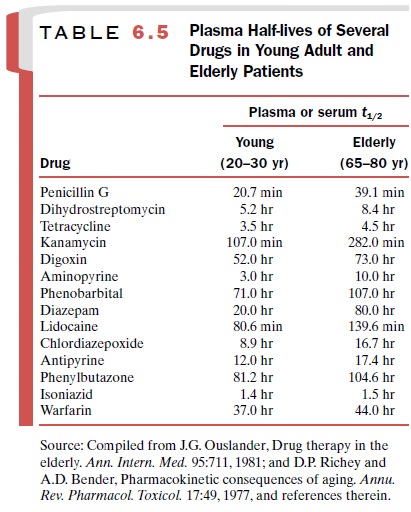 Drug distribution in elderly patients may be altered by hypoalbuminemia, qualitative changes in drug-binding sites, reductions in relative muscle mass, increases in the proportion of body fat, and decreases in total body water. The plasma level of free, active drug is often a di-rect function of the extent of drug binding to plasma proteins. There is a well-documented age-dependent decline (about 20%) in plasma albumin concentration in humans due to a reduced rate of hepatic albumin synthesis.

These changes in serum albumin may affect the free drug concentration for a number of highly bound drugs, such as phenytoin, warfarin, and meperidine.

In addition to changes in metabolism that occur as a re-sult of reduced hepatic enzyme activity, metabolism may be impaired by a reduction in hepatic mass, vol- ume, and blood flow (Fig. 6.1). Phase I oxidative path-ways are decreased with age, while phase II conjugation pathways are unchanged. 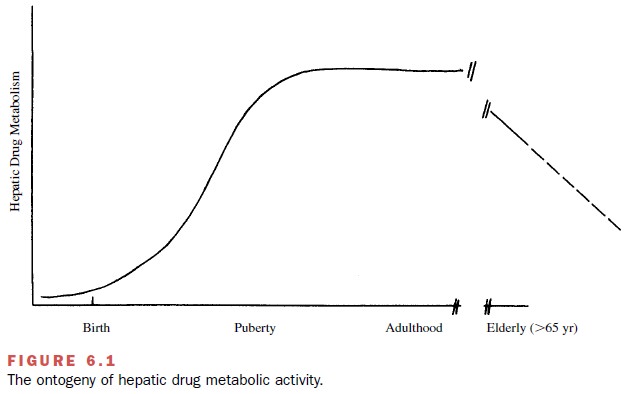 In a carefully controlled clinical study, the plasma half-life of diazepam (Valium), a widely used antianx-iety agent, exhibited a striking age dependency. In pa-tients aged 20 years, the t1/2was about 20 hours, and this increased linearly with age to about 90 hours at 80 years. Half-lives of other drugs in young and old pa-tients are presented in Table 6.5. These data demon-strate changes in drug half-life with increasing age, suggesting that at least for some drugs, elderly patients have reduced metabolism, drug clearance, or both.

Renal elimination of foreign compounds may change dramatically with increasing age by factors such as re-duced renal blood flow, reduced glomerular filtration rate, reduced tubular secretory activity, and a reduction in the number of functional nephrons. It has been esti-mated that in humans, beginning at age 20 years, renal function declines by about 10% for each decade of life. This decline in renal excretion is particularly important for drugs such as penicillin and digoxin, which are elim-inated primarily by the kidney.

The incidence of iatrogenic complications is three to five times greater in the elderly than in the general pop-ulation. Adverse drug reactions account for 20 to 40% of these complications. Inappropriate drug use has been noted in almost half of hospitalized elderly patients. One-fourth of these patients were receiving contraindi-cated drugs, and three-fourths were receiving unnecessary drugs. Half of adverse drug reactions occur in pa-tients receiving inappropriate drugs.

Delirium and cognitive impairment are common ad-verse reactions in the elderly. While almost every class of drugs has the potential to produce delirium in the elderly, it is most frequent with psychoactive drugs. The risk increases with the number of drugs the patient is re-ceiving, reaching a 14-fold increase in risk for patients taking more than 6 drugs.

The following should be considered when prescribing drugs for elderly patients.

Drugs should be prescribed only if nonpharmaco-logical techniques are ineffective, such as for problems like sleeplessness and anxiety. When drugs are pre-scribed for these conditions, they should be given for a limited time and the patient closely monitored for ad-verse effects. Dosage should start at or below the lowest recommended levels.

Keep it simple. Prescribe drugs only if you have available extensive experience and prescribing informa-tion for that drug in elderly patients. Use the least num-ber of drugs and doses per day Reevaluate the continued use of all medications the patient is receiving, including over-the-counter medica-tions, on a regular basis.

Noncompliance is a significant problem, with almost 50% of elderly patients failing to take their medications as prescribed. Some of the reasons for noncompliance are inability to pay for the drug, side effects, mental impair-ment, and inability to understand complex instructions.