The dot method is a convenient method of representing absolute numbers on maps.

The dot method is a convenient method of representing absolute numbers on maps. Each dot is assigned with a value and the number of dots, can be placed within an area as per their distribution pattern. This method is useful not only to provide a good visual impression and a realistic distribution pattern but also it helps in understanding correlations.

They are drawn to show the distribution of population, cattle, area under crops, output of commodities, etc., when data is given in absolute figures administrative unit-wise.

Dots should be round and of uniform size. They should be of small size but as small as a fine point. Dots of about 1 to1.5 mm diameter may be drawn as they are quite effective. The value given to a dot should be determined carefully and keeping in view the highest and the lowest values.

The placing of dots should conform to the geographic conditions of a particular area. The knowledge of the geographical conditions of the area is necessary for placing the dots correctly. Sandy, stony and forested areas are naturally unimportant for the production of agricultural crops and human settlements. Marshy areas and areas occupied by lakes, river beds, etc., being negative are left without dots. Unproductive lands are called negative lands. It is better if negative areas are first identified and shaded lightly with a lead pencil. Thus the placing of dots on negative areas can be easily avoided. The areas shaded with pencil are erased with a rubber eraser after the dots have been placed on the map.

Requirements for the preparation of a dot map

Steps to construct a dot map

* Obtain a base map of the area or administrative regions you wish to show.

* Study the data to be mapped and decide on a dot value (should be a rounded number).

* Determine on an appropriate dot shape and size. As a general guide, dots that are too small to produce an overly sparse dot pattern which is not very precise.

* Place the correct number of dots with each administrative boundary as determined in step 2.

Construct a dot map to represent population data as given in Table 11.1. 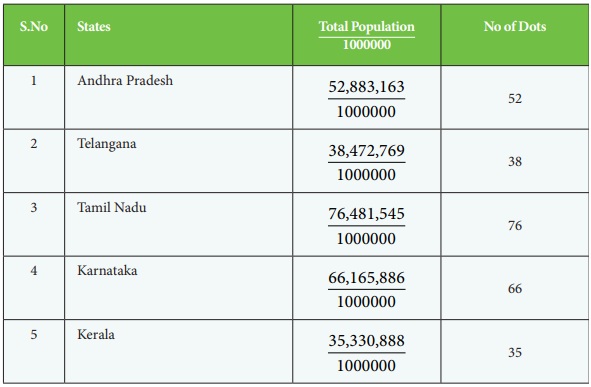 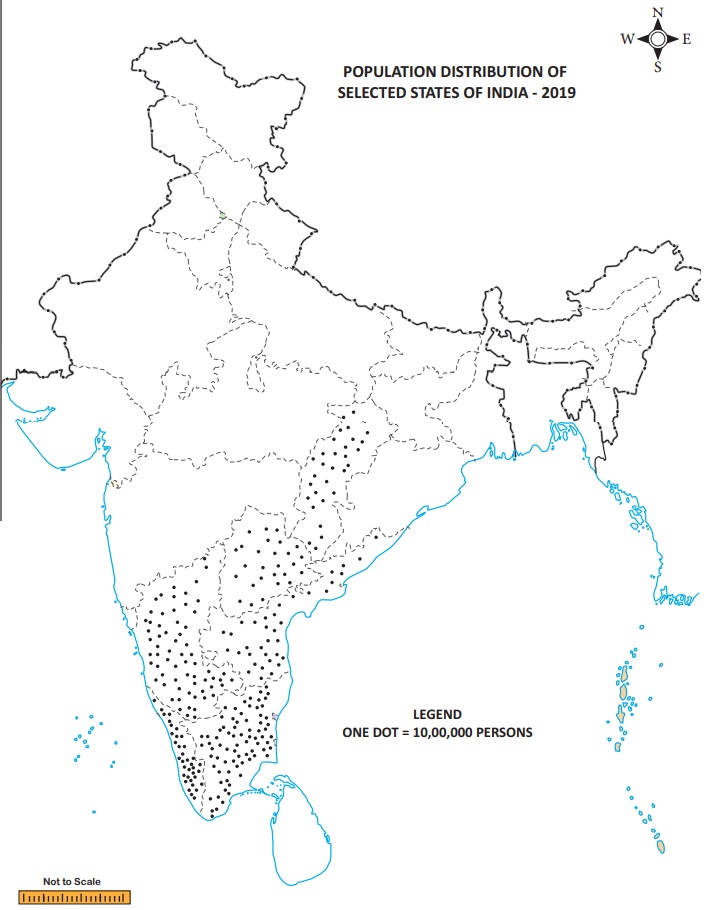