The important quinolones are synthetic fluorinated analogs of nalidixic acid.

The important quinolones are synthetic fluorinated analogs of nalidixic acid (Figure 46–3). They are active against a variety of gram-positive and gram-negative bacteria. 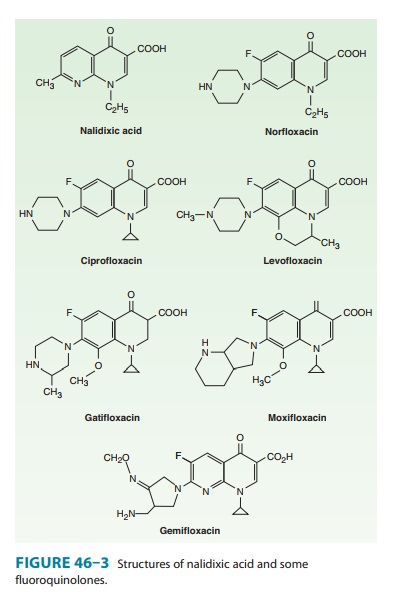 Earlier quinolones such as nalidixic acid did not achieve systemic antibacterial levels and were useful only in the treatment of lower urinary tract infections. Fluorinated derivatives (ciprofloxacin, levofloxacin, and others; Figure 46–3 and Table 46–2) have greatly improved antibacterial activity compared with nalidixic acid and achieve bactericidal levels in blood and tissues.

Gatifloxacin, gemifloxacin, and moxifloxacin make up a third group of fluoroquinolones with improved activity against gram-positive organisms, particularly S pneumoniae and some staphylo-cocci. Gemifloxacin is active in vitro against ciprofloxacin-resistant strains of S pneumoniae, but in vivo efficacy is unproven. Although MICs of these agents for staphylococci are lower than those of ciprofloxacin (and the other compounds mentioned in the para-graph above), it is not known whether the enhanced activity is sufficient to permit use of these agents for treatment of infections caused by ciprofloxacin-resistant strains. In general, none of these agents is as active as ciprofloxacin against gram-negative organ-isms. Fluoroquinolones also are active against agents of atypical pneumonia (eg, mycoplasmas and chlamydiae) and against intra-cellular pathogens such as Legionella pneumophila and some myco-bacteria, including Mycobacterium tuberculosis and Mycobacteriumavium complex. Moxifloxacin also has modest activity againstanaerobic bacteria. Because of toxicity, gatifloxacin is no longer available in the United States.

During fluoroquinolone therapy, resistant organisms emerge in about one of every 107–109 organisms, especially among staphylo-cocci, P aeruginosa, and Serratia marcescens. Resistance is due to one or more point mutations in the quinolone binding region of the target enzyme or to a change in the permeability of the organism. However, this does not account for the relative ease with which resistance develops in exquisitely susceptible bacteria. More recently two types of plasmid-mediated resistance have been described. The first type utilizes Qnr proteins, which protect DNA gyrase from the fluoroquinolones. The second is a variant of an aminoglycoside acetyltransferase capable of modifying ciprofloxacin. Both mecha-nisms confer low-level resistance that may facilitate the point muta-tions that confer high-level resistance. Resistance to one fluoroquinolone, particularly if it is of high level, generally confers cross-resistance to all other members of this class.

After oral administration, the fluoroquinolones are well absorbed (bioavailability of 80–95%) and distributed widely in body fluids and tissues (Table 46–2). Serum half-lives range from 3 to 10 hours. The relatively long half-lives of levofloxacin, gemifloxacin, gati-floxacin, and moxifloxacin permit once-daily dosing. Oral absorp-tion is impaired by divalent and trivalent cations, including those in antacids. Therefore, oral fluoroquinolones should be taken 2 hours before or 4 hours after any products containing these cat-ions. Serum concentrations of intravenously administered drug are similar to those of orally administered drug. Most fluoroqui-nolones are eliminated by renal mechanisms, either tubular secre-tion or glomerular filtration (Table 46–2). Dosage adjustment is required for patients with creatinine clearances less than 50 mL/min, the exact adjustment depending on the degree of renal impair-ment and the specific fluoroquinolone being used. Dosage adjust-ment for renal failure is not necessary for moxifloxacin. Nonrenally cleared fluoroquinolones are relatively contraindicated in patients with hepatic failure.

Fluoroquinolones (other than moxifloxacin, which achieves rela-tively low urinary levels) are effective in urinary tract infections caused by many organisms, including P aeruginosa. These agents are also effective for bacterial diarrhea caused by Shigella, Salmonella, toxigenic E coli, and Campylobacter. Fluoroquinolones (except norfloxacin, which does not achieve adequate systemic concentra-tions) have been used in infections of soft tissues, bones, and joints and in intra-abdominal and respiratory tract infections, including those caused by multidrug-resistant organisms such as Pseudomonas and Enterobacter. Ciprofloxacin is a drug of choice for prophylaxis and treatment of anthrax, although the newer fluoroquinolones are active in vitro and very likely in vivo as well.

Ciprofloxacin and levofloxacin are no longer recommended for the treatment of gonococcal infection in the United States as resis-tance is now common. However, both drugs are effective in treat-ing chlamydial urethritis or cervicitis. Ciprofloxacin, levofloxacin, or moxifloxacin is occasionally used for treatment of tuberculosisand atypical mycobacterial infections. These agents may be suit-able for eradication of meningococci from carriers or for prophy-laxis of infection in neutropenic cancer patients.With their enhanced gram-positive activity and activity against atypical pneumonia agents (chlamydiae, Mycoplasma, and Legionella), levofloxacin, gatifloxacin, gemifloxacin, and moxifloxacin— so-called respiratory fluoroquinolones—are effective and used increasingly for treatment of upper and lower respiratory tract infections.

Fluoroquinolones are generally well tolerated. The most common effects are nausea, vomiting, and diarrhea. Occasionally, headache, dizziness, insomnia, skin rash, or abnormal liver function tests develop. Photosensitivity has been reported with lomefloxacin and pefloxacin. QTc prolongation may occur with gatifloxacin, levo-floxacin, gemifloxacin, and moxifloxacin, which should be avoided or used with caution in patients with known QTc interval prolon-gation or uncorrected hypokalemia; in those receiving class IA (eg, quinidine or procainamide) or class III antiarrhythmic agents (sotalol, ibutilide, amiodarone); and in patients receiving other agents known to increase the QTc interval (eg, erythromycin, tricy-clic antidepressants). Gatifloxacin has been associated with hyper-glycemia in diabetic patients and with hypoglycemia in patients also receiving oral hypoglycemic agents. Because of these serious effects (including some fatalities), gatifloxacin was withdrawn from sales in the United States in 2006; it may be available elsewhere.

Fluoroquinolones may damage growing cartilage and cause an arthropathy. Thus, these drugs are not routinely recommended for patients under 18 years of age. However, the arthropathy is revers-ible, and there is a growing consensus that fluoroquinolones may be used in children in some cases (eg, for treatment of pseudomonal infections in patients with cystic fibrosis). Tendonitis, a rare com-plication that has been reported in adults, is potentially more seri-ous because of the risk of tendon rupture. Risk factors for tendonitis include advanced age, renal insufficiency, and concur-rent steroid use. Fluoroquinolones should be avoided during preg-nancy in the absence of specific data documenting their safety.