India is a home to a civilisation that is 5,000 years old. Different groups of people from different parts of the world were attracted towards India over the years because of its wealth. Some came for trade with the local people and others were keen on invading its territory. So diverse races of people migrated into India by land and sea routes over time. Thus the Dravidians, Negroids, Aryans, Alpines and Mongoloids became part of the modern Indian race. Then, the people who migrated to India also moved to other parts of the country. This movement and migration of people is the reason for India’s rich diversity. 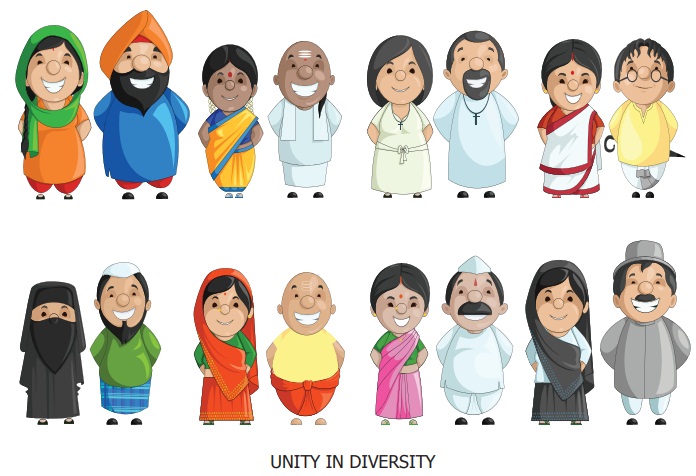 A continent is a very large area of land with various physical features such as mountains, plateaus, plains, rivers and seas and various types of weather patterns. India has all of them. India is known as a sub-continent. These features have an underlying influence upon the people who live in different landforms of the country.

Physical and climatic features determine the economic activities of a region. People living in the plains thrive on agriculture, while people in the coastal areas take to fishing for their livelihood. In mountainous regions, rearing of animals is undertaken. Hilly landscapes are supported by favourable climatic conditions for the cultivation of coffee and tea.

Diversity in landforms also impacts the flora and fauna of a region. The plant and animal wealth of a place depends upon the natural habitat and the climate that prevails in that region. Food, clothing, occupation and livelihood of the people is closely connected with the region’s natural surroundings and climate.

A community is a place where people live together with a common interest or heritage. Our community is made up of peasants, labourers, artisans, parents, teachers, students and many others. For a comfortable livelihood, communities depend on each other.

• Mawsynram located in Megalaya, is the land of highest rainfall.

• Jaisalmer located in Rajasthan, is the land of lowest rainfall.

Families constitute the fundamental unit of a society. There are two types of families: joint families and nuclear families. Families live in a harmonious neighbourhood. Hundreds of neighbourhoods collectively form a village and thousands of them group together in a city. The needs of people and the interdependence of communities for amenities such as water, food, electricity, education, housing and so on bring us together to live in harmony. Though we are diverse in our cultural practices, we are united and interdependent socially. 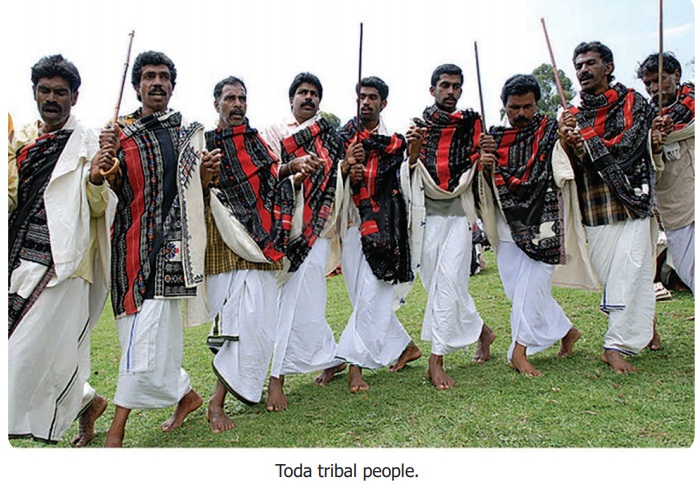 Our Constitution declares India to be a secular nation in which all religions are treated equally. The freedom of religion is our fundamental right. India is the birthplace of many religions and has become the home of many others. Hinduism, Islam, Christianity, Sikhism, Buddhism, Jainism and Zoroastrianism flourish in India.

India is a land of festivals, where people from different religions engage in many colourful celebrations in different parts of the country and co-exist harmoniously. The wide variety of festivals celebrated in India is a true manifestation of its rich culture and traditions. Festivals like Pongal, Deepavali, Holi, Vijayadhasami, AyudhaPuja, Navaratri, Durga Puja, Dussehra, Ganesh Chaturthi, Bihu, Kumbamela, Onam, Miladi Nabi, Ramzan, Christmas, Buddha Poornima, Mahavir Jayanthi, Guru Nanak Jayanthi and Rakshabandhan are some of the festivals that denote the cultural diversity of India. 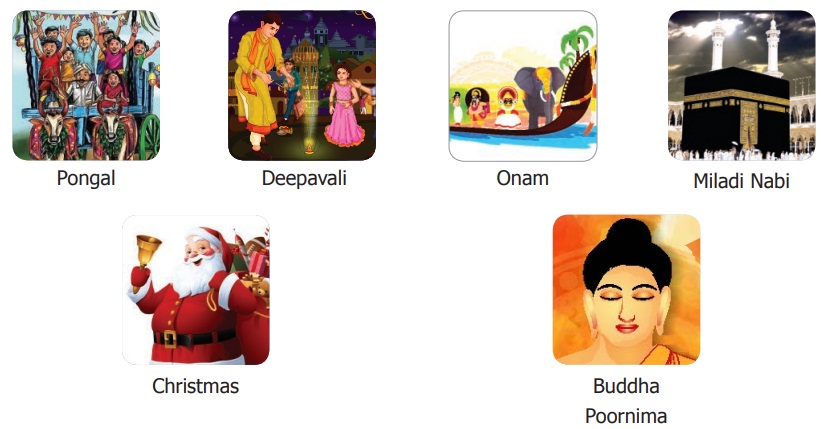 According to census of India 2001, India has 122 major languages and 1599 other languages.  Four  major  Indian  language  families  are  Indo-Aryan,  Dravidian, Austroasiatic and Sino Tibetian. Tamil is the oldest Dravidian language.Historically, the Portuguese, the Dutch, the British, the Danish and the French came to  India  for  trade  and  their  occupation  of  India or some parts of it has left behind a  certain  impact  upon  the  culture  and  language of the people. The  Constitution  of   India   recognises   twenty-two languages as  official  languages. The Government of India has declared Tamil as the first classical language in 2004. Apart from Tamil, five other Indian languages have been declared as  the  classical  languages,  by  the Goverment of India.

Because the British ruled over the entire country for over three hundred years before independence in 1947, the English language gained prominence in India. In due course, English has emerged as an important language and a medium of instruction in schools and colleges. It is widely used in official communication and daily life. 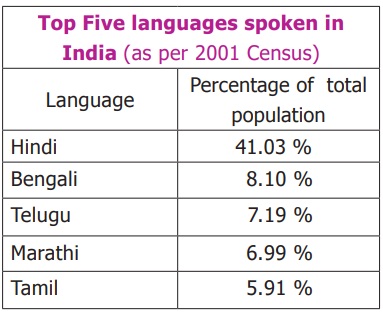 The term ‘culture’ refers to customs and practices of people, their language, their dress code, cuisine, religion, social habits, music, art and architecture.

The culture of a group of people is reflected in their social behaviour and interactions. The group identity fostered by social patterns is unique to a group.

Art and architecture are an integral part of every community. It develops as a part of culture and tradition of a community. Each of the 29 states and 7 Union territories of India has rich traditions and unique ways of artistic expression.

About 60 percent ofthe total epigraphical inscriptions found by the Archaeological Survey of India (ASI) are from Tamil Nadu, and most of these are in the Tamil script.

In ancient times, dance was considered as a way to celebrate, worship and also as a gesture of thanks giving and joy. Dances of India reflect its cultural richness.

Music and dance go hand in hand. There are several styles of music practiced in India. The Hindustani music, Karnatic music, Classical Tamil Music, Folk Music, Lavani, Ghazl are some of them. There are songs from various languages composed by blending these different forms of music. 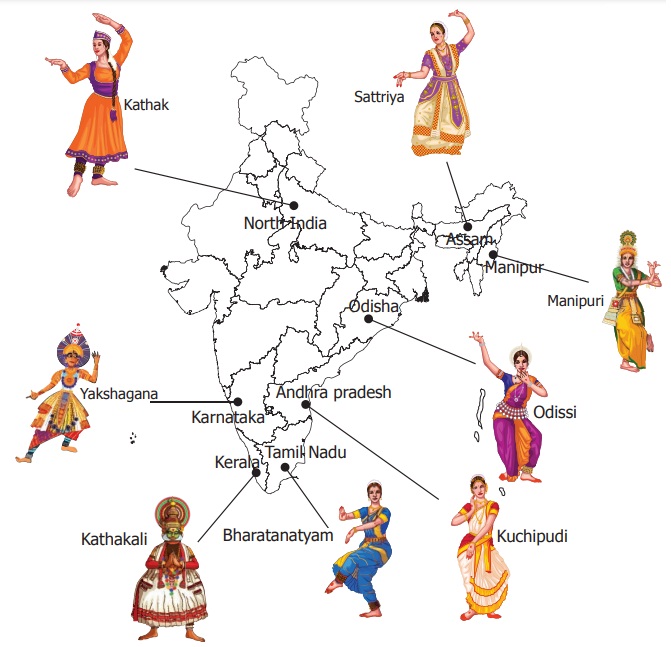 You have read about the diversity that exists in our country. Compare and contrast two states in this table.