Distinction between Mergers vs. Takeovers

The following are the differences between Mergers and Takeover:

Distinction between Mergers vs. Takeovers

The following are the differences between Mergers and Takeover: 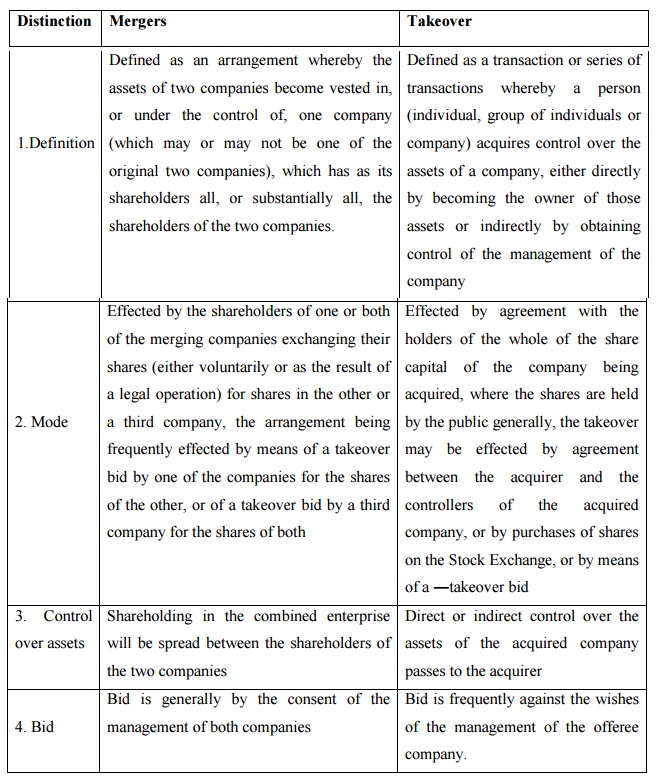 Mergers: Defined  as  an  arrangement  whereby  the  assets of two companies become vested in,  or  under  the  control  of,  one  company (which  may  or  may  not  be  one  of  the  original two companies), which has as its  shareholders  all,  or  substantially  all,  the  shareholders of the two companies.

Takeover: Defined as a transaction or series of transactions whereby a   person (individual, group of individuals or company) acquires control over the assets of a company, either directly by  becoming  the  owner  of  those assets  or  indirectly  by  obtaining control  of  the  management  of  the company

Mergers: Effected by the shareholders of one or both  of the merging companies exchanging their  shares (either voluntarily or as the result of  a legal operation) for shares in the other or a  third  company,  the  arrangement  being  frequently effected by means of a takeover  bid by one of the companies for the shares  of the other, or of a takeover bid by a third  company for the shares of both

Takeover: Effected  by  agreement  with  the holders of the whole  of the share capital   of   the   company   being acquired, where the shares are held by the public generally, the takeover may  be  effected  by  agreement between   the   acquirer   and   the controllers of the acquired company, or by purchases of shares on the Stock Exchange, or by means of   a   ―takeover

Mergers: Shareholding  in  the  combined  enterprise  will be spread between the shareholders of  the two companies

Takeover: Direct or indirect control over the assets  of  the  acquired  company passes to the acquirer

Mergers: Bid  is  generally  by  the  consent  of  the management of both companies

Takeover: Bid is frequently against the wishes of  the  management  of  the  offeree company.