Service all the requests close to the current head position, before moving the head far away to service other requests. That is selects the request with the minimum seek time from the current 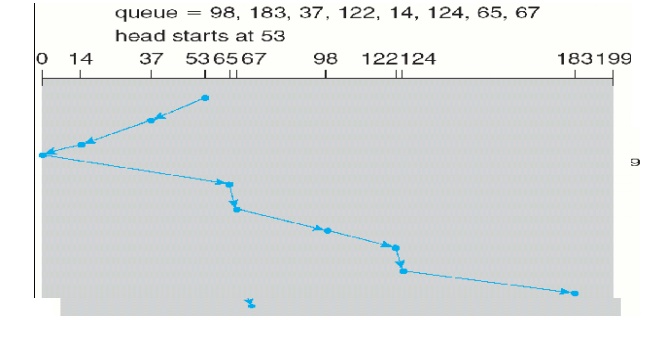 Elevator algorithm: Sometimes the SCAN algorithm is called as the elevator algorithm, since the disk arm behaves just like an elevator in a building, first servicing all the requests going up, and then reversing to service requests the other way.

Variant of SCAN designed to provide a more uniform wait time. It moves the head from one end of the disk to the other, servicing requests along the way. When the head reaches the other end, however, it immediately returns to the beginning of the disk, without servicing any requests on the return trip.

Both SCAN and C-SCAN move the disk arm across the full width of the disk. In this, the arm goes only as far as the final request in each direction. Then, it reverses direction immediately, without going all the way to the end of the disk.

ü Before a disk can store data, the sector is divided into various partitions. This process is called low-level formatting or physical formatting. It fills the disk with a special data structure for each sector.

ü The data structure for a sector consists of

v The header and trailer contain information used by the disk controller, such as a sector number and an error-correcting code (ECC).

v This formatting enables the manufacturer to

Ø   Test the disk and

To initialize the mapping from logical block numbers

· To use a disk to hold files, the operating system still needs to record its own data structures on the disk. It does so in two steps.

(a)    The first step is Partition the disk into one or more groups of cylinders. Among the partitions, one partition can hold a copy of the OS‘s executable code, while another holds user files.

(b)  The second step is logical formatting .The operating system stores the initial file-system data structures onto the disk. These data structures may include maps of free and allocated space and an initial empty directory.

1    For a computer to start running-for instance, when it is powered up or rebooted-it needs to have an initial program to run. This initial progr am is called bootstrap program & it should be simple. It initializes all aspects of the system, from CPU registers to device controllers and the contents of main memory, and then starts the operating system.

1 To do its job, the bootstrap program

ü   Loads that kernel into memory, and

ü   Jumps to an initial address to begin the operating-system execution.

3.  It cannot be infected by a computer virus. Since, ROM is read only.

ü The full bootstrap program is stored in a partition called the boot blocks, at a fixed location on the disk. A disk that has a boot partition is called a boot disk or system disk.

ü The code in the boot ROM instructs the disk controller to read the boot blocks into memory and then starts executing that code.

1    The disk with defected sector is called as bad block.

1Depending on the disk and controller in use, these blocks are handled in a variety of ways;

§  If blocks go bad during normal operation, a special program must be run manually to search for the bad blocks and to lock them away as before. Data that resided on the bad blocks usually are lost.

The controller maintains a list of bad blocks on the disk. Then the controller can be told to replace each bad sector logically with one of the spare sectors. This scheme is known as sector sparing or forwarding.

ü A typical bad-sector transaction might be as follows:

ü   The controller calculates the ECC and finds that the sector is bad.

ü     It reports this finding to the operating system.

ü         The next time that the system is rebooted, a special command is run to tell the controller to replace the bad sector with a spare.

ü   After that, whenever the system requests logical block 87, the request is translated into the replacement sector's address by the controller.

ü For an example, suppose that logical block 17 becomes defective, and the first available spare follows sector 202. Then, sector slipping would remap all the sectors from 17 to 202,moving them all down one spot. That is, sector 202 would be copied into the spare, then sector 201 into 202, and then 200 into 201, and so on, until sector 18 is copied into sector 19. Slipping the sectors in this way frees up the space of sector 18, so sector 17 can be mapped to it.