With the expansion of cage culture and intensification of culture techniques, an increasing number of diseases and large-scale mortalities are occurring in cage farms.

With the expansion of cage culture and intensification of culture techniques, an increasing number of diseases and large-scale mortalities are occurring in cage farms. As mentioned earlier, some of the mortalities are caused by the use of poor-quality feedstuffs, such as fatty fish. Nutritional diseases are not uncommon. Deterioration of water quality due to accumulation of waste matter from cages also contributes to the occurrence of diseases and mortality. Becterial and parasitic diseases have become more common and serious.

The most severe disease of yellowtail appears to be due to the infestation of the monogenetic trematodes Benedenia seriolae and Axine heterocerca. The mature Benedenia is about 6 to7 mm in length and in sea water it reproduces all the year round at temperatures over 12°C. The larva attaches itself to the fish as soon as it comes into contact with it. As many as 50 or more of them may be attached to a fish, and if untreated the fish will lose appetite, stop feeding and eventually die. As the parasite reproduces in polluted waters, the preventive measure is to improve the water quality. The best cure is a bath in fresh water as the parasite has little resistance against low salinity.

Axine may infest the gills of yellowtailsthroughout the year and cause anaemia resulting in mortality. The best cure is a bath in highly saline water (9–10 per cent) for three minutes, when the parasite will fall off. The fish should not be kept in this water too long as the salinity affects the gills, causing bleeding.

Another important parasite of yellowtail is the copepod Caligus, which attaches to the gills and mouth of the fish. Heavy infestation causes weakening of the fish as it affects feeding and eventually causes mortality. The recommended cure is a bath in a 20ppm solution of Neguvon in fresh water.

Vibriosis and icthyosporidiasis (caused by the phycomycete lchthyosporidium hoferi) are two major diseases believed to be transmitted through the use of infected fish as feed in culture facilities. Both diseases cause significant losses. Nocardial infections of the internal organs such as the spleen and the kidney caused by the bacillus Nocardia kampachi are wide-spread in yellowtail farms and very often occur at the same time as vibriosis, resulting in heavy mortality.

Pseudotuberculosis, caused by Pasteurellapiscida, is one of the diseases identified inrecent years. It is believed to be transmitted through fry and fingerlings introduced from infected areas. Oral administration of sulphur drugs or antibiotics has been used to control the disease. Experimental studies seem to show that prophylactic immunization of juveniles can be achieved by oral spray and immersion methods 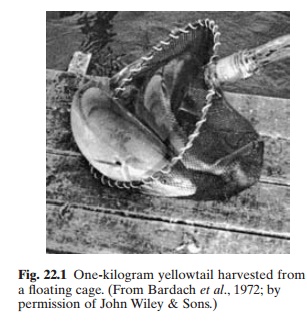