From the figure we have the following definitions V1,v2,v3,v4,v5 are called vertices. 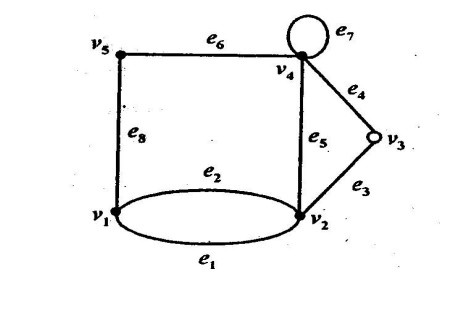 If there is an edge from vi to vi then that edge is called self loop or simply loop.

For example, the edge e7 is called a self loop. Since the edge e7 has the same vertex (v4) as both its terminal vertices.

If two edges have same end points then the edges are called parallel edges.

For example, the edge e1 and e2 are called parallel edges since e1 and e2 have the same pair of vertices (v1,v2) as their terminal vertices.

If the vertex vi is an end vertex of some edge ek and ek is said to be incident with vi.

Two edges are said to be adjacent if they are incident on a common vertex. In fig (i) the edges e6 and e8 are adjacent.

Two vertices vi and vj are said to adjacent if vi vj is an edge of the graph. (or equivalently (vi,vj) is an end vertices of the edge ek) 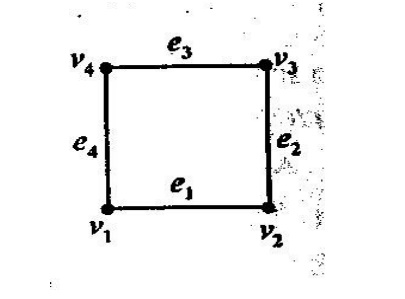 For example, in fig., v1 and v5 are adjacent vertices.

A graph which has neither self loops nor parallel edges is called a simple graph.

NOTE: In this chapter, unless and otherwise stated we consider only simple undirected graphs.

A vertex having no edge incident on it is called an Isolated vertex. It is obvious that for an isolated vertex degree is zero.

One can easily note that Isolated vertex is not adjacent to any vertex.

If the degree of any vertex is one, then that vertex is called pendent vertex. 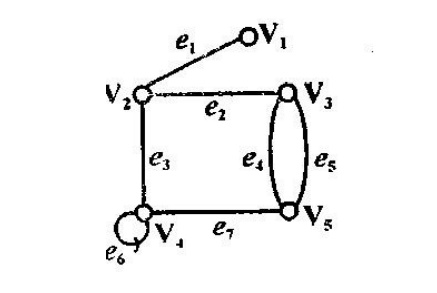 The edge e6 is called loop. The edges e4 and e5 are parallel edges.

In a graph G=(V,E), on edge which is associated with an ordered pair of V * V is called a directed edge of G.

If an edge which is associated with an unordered pair of nodes is called an undirected edge. 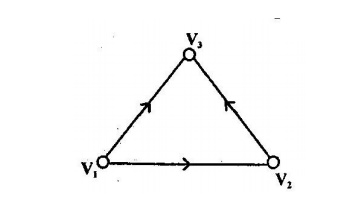 A graph in which every edge is directed edge is called a digraph or directed graph.

A graph in which every edge is undirected edge is called an undirected graph. 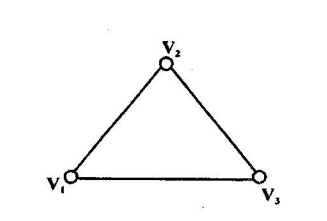 If some edges are directed and some are undirected in a graph, the graph is called an mixedgraph. 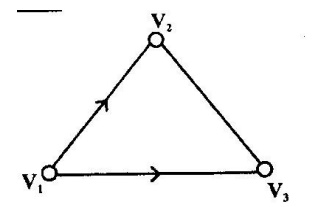 A graph which contains some parallel edges is called a multigraph. 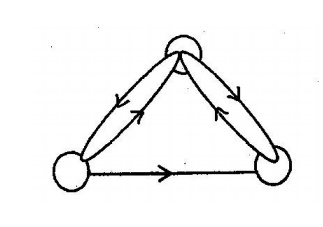 A graph in which loops and parallel edges are allowed is called a Pseudograph. 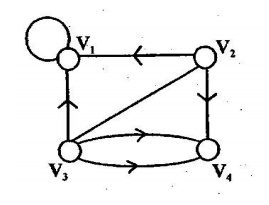 DEFINITION: Degree of a Vertex:

The number of edges incident at the vertex vi is called the degree of the vertex with self loops counted twice and it is denoted by d (vi). 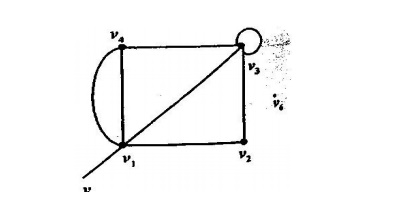 In-degree and out-degree of a directed graph:

In a directed graph, the in-degree of a vertex V, denoted by deg- (V) and defined by the number of edges with V as their terminal vertex.

The out- degree of V, denoted by deg+ (V), is the number of edges with V as their initial vertex.

NOTE: A loop at a vertex contributes 1 to both the in-degree and the out-degree of this vertex.

The sum of degrees of all vertices of an undirected graph is twice the number of edges of the graph and hence even.

Since every degree is incident with exactly two vertices, every edge contributes 2 to the sum of the degree of the vertices.

Therefore, All the ‘e’ edges contribute (2e) to the sum of the degrees of vertices.

In an undirected graph, the numbers of odd degree vertices are even.

By handshaking theorem, we have Since each deg (vi) is even, is even.

Since each deg (vj) is odd, the number of terms contained in i.e., The number of vertices of odd degree is even.

The maximum number of edges in a simple graph with ‘n’ vertices is n(n-1))/2.

We prove this theorem by the principle of Mathematical Induction.

For n=1, a graph with one vertex has no edges. Therefore, the result is true for n=1.

The result is true for n=2.

Assume that the result is true for n=k. i.e., a graph with k vertices has at most kk-12 edges.

When n=k+1. Let G be a graph having ‘n’ vertices and G’ be the graph obtained from G by deleting one vertex say v ϵ V (G).

Hence the maximum number of edges in a simple graph with ‘n’ vertices is nn-12.

If all the vertices of an undirected graph are each of degree k, show that the number of edges of the graph is a multiple of k.

Let 2n be the number of vertices of the given graph.

Let ne be the number of edges of the given graph. By Handshaking theorem, we have

Therefore, the number of edges of the given graph is amultiple of k.

If every vertex of a simple graph has the same degree, then the graph is called a regular graph.

If every vertex in a regular graph has degree k,then the graph is called k-regular.

In a graph, if there exist an edge between every pair of vertices,then such a graph is called complete graph.

i.e., In a graph if every pair of vertices are adjacent,then such a graph is called complete graph.

In other words, a graph H is said to be a subgraph of G if all the vertices and all edges of H are in G and if the adjacency is preserve in H exactly as in G.

Hence, we have the following:

(ii)  A single vertex in agraph G is a subgraph of G.

(iii)A single edge in G, together with its end vertices is also a subgraph of G.

A complete bipartite graph with bipartition is denoted by km,n. 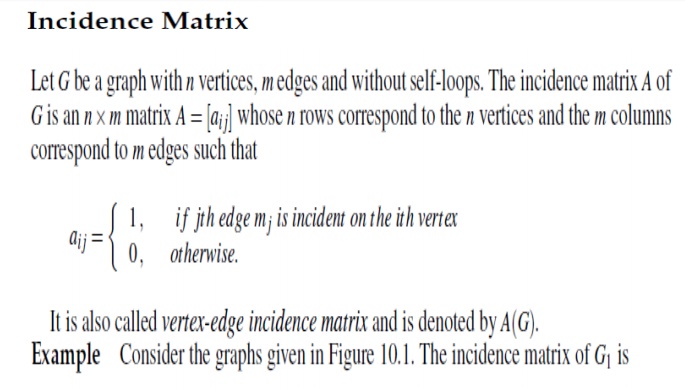 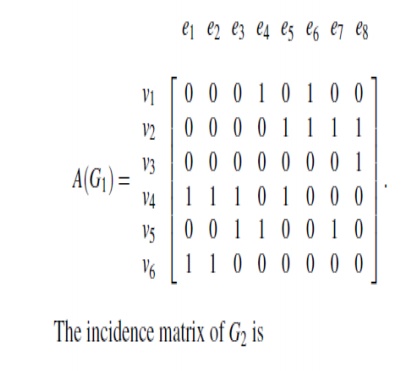 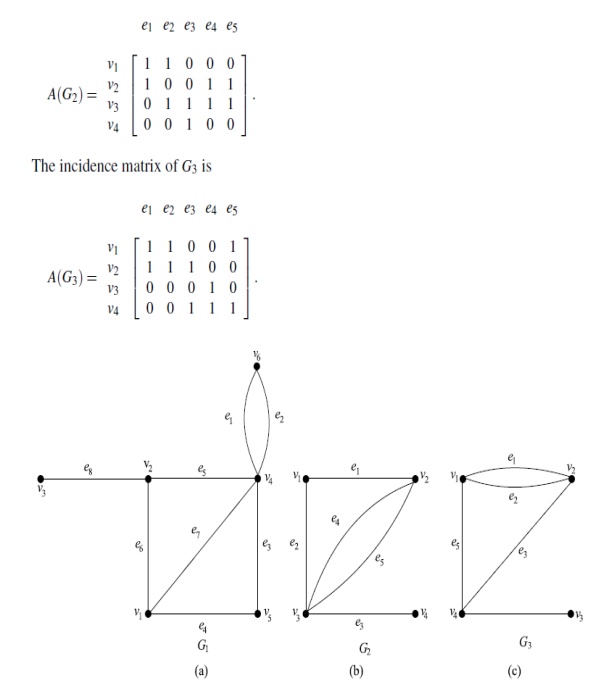 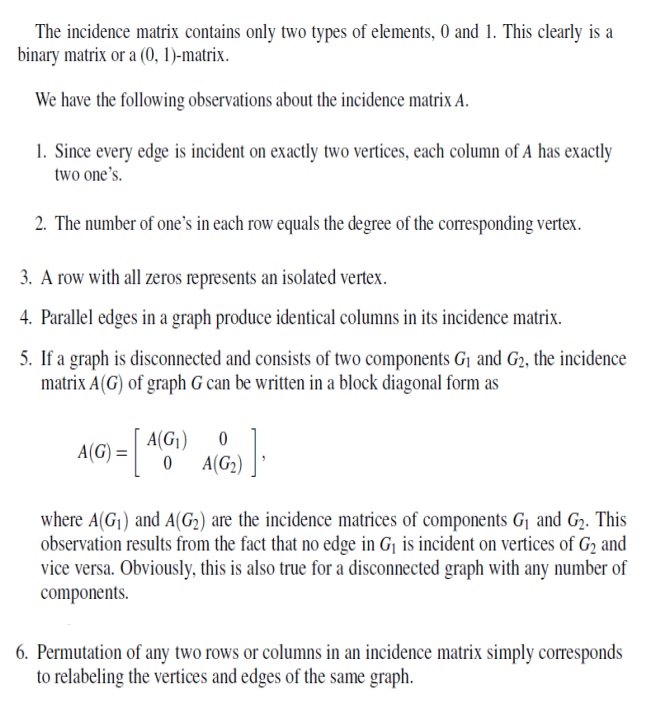 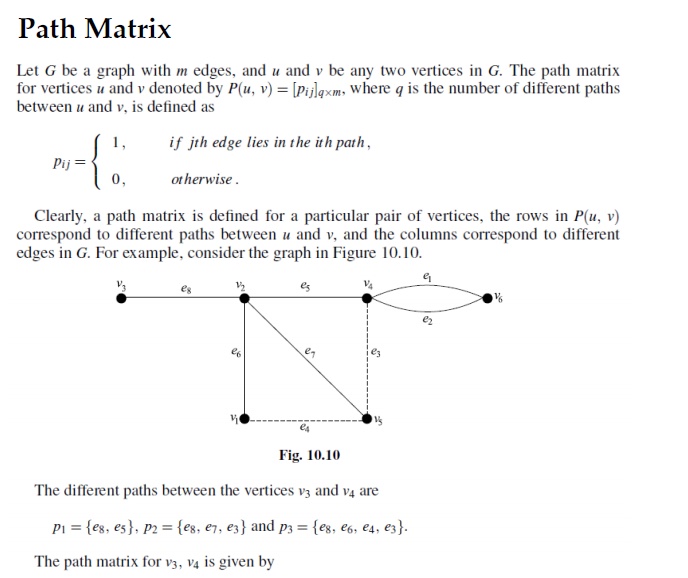 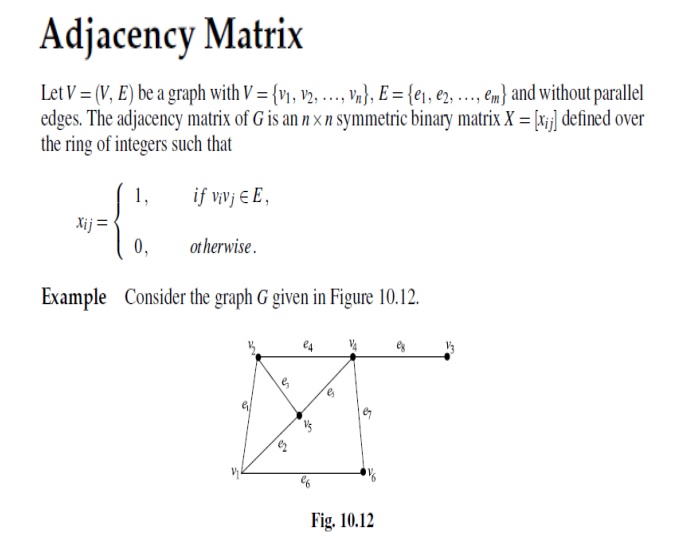 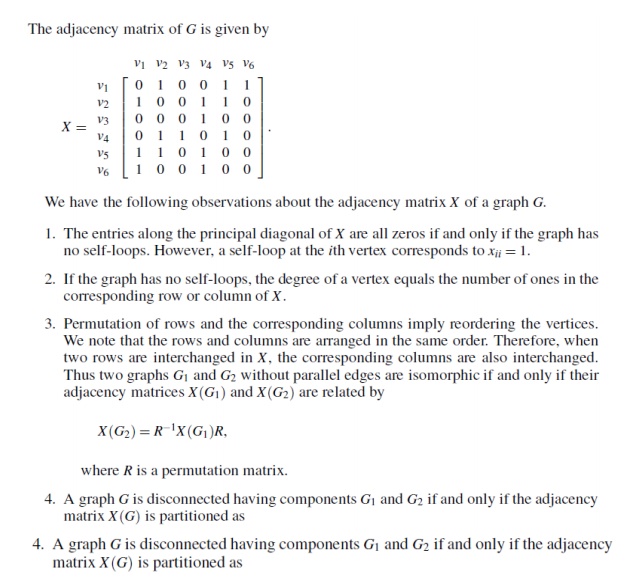 Two graphs G1 and G2 are said to be isomorphic to each other, if there exists a one-to-one correspondence between the vertex sets which preserves adjacency of the vertices.

Note: However, these conditions are not sufficient for graph isomorphism.

Two graphs are isomorphic if and only if their vertices can be labeled in such a way that the corresponding adjacency matrices are equal.

Two simple graphs G1 and G2 are isomorphic if and only if their adjacency matrices A1 and A2 are related A1=P-1 A2 P where P is a permutation matrix.

A matrix whose-rows are the rows of the unit matrix but not necessarily in their natural order is called permutation matrix.

Test the Isomorphism of the graphs by considering the adjacency matrices.

Let A1 and. A2 be the adjacency matrices of G1 and G2 respectively. 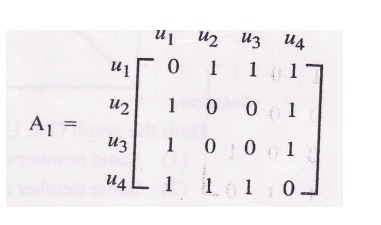 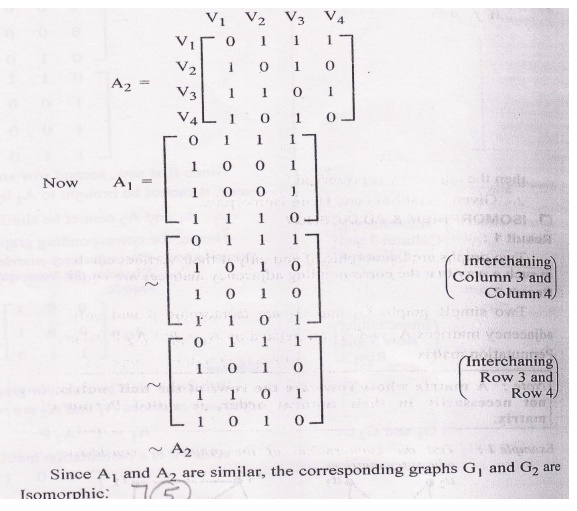 A Path in a graphi s a sequence v1,v to the next.ln other words,starting with the vertex v1 one can travel along edges(v1,v2),(v2,v3)..and reach the vertex vk.

Length of the path:

The number of edges appearingi n the sequence of a path is called the length of Path.

A path which originates and ends in the same node is called a cycle of circuit.

A path is said to be simple if all the edges in the path are distinct. A path in which all the vertices are traversed only once is called an 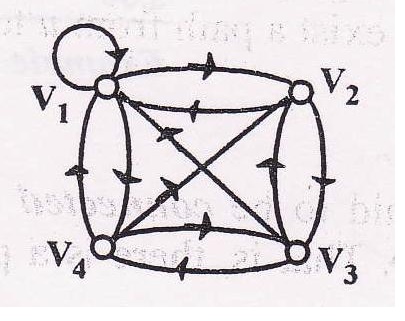 Then some of the paths originating in node V1 and ending in node v1 are:

Path P5 is simple but not elementary.

A node v of a simple digraph is-said to ber eachable from the node u of the same graph, if there exist a path from u to v.

A graph which is not connected is called disconnected graph.

Components of a Graph :

The connected subgraphs of a graph G are called components of the.' graph G. 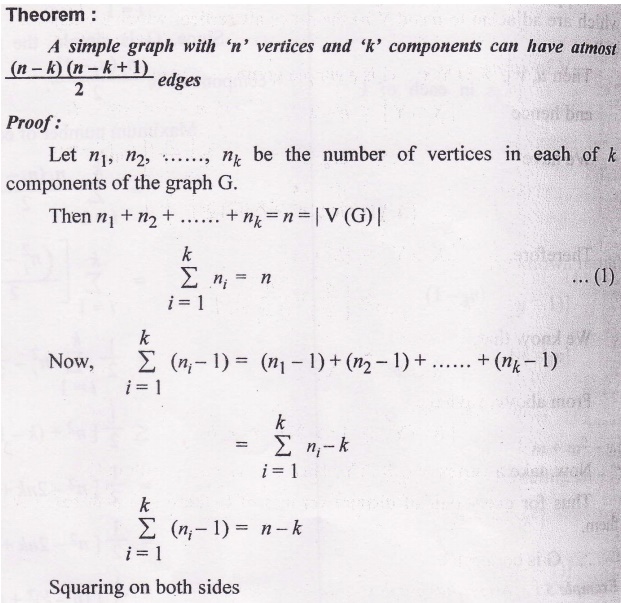 A simple digraph is said to be unilaterally connected if for any pair of nodes of the graph atleast one of the node of the pair is reachable from the node.

A simple digraph is said to be strongly connected if for any pair of nodes of the graph both the nodes of the pair are reachable from the one another.

We call a digraph is weakly.connected if it is connected.as an undirected graph in which the direction of the edges is neglected.

2.A strongly connected digraph is both unilaterally and weakly connected.

For example consider the graph: 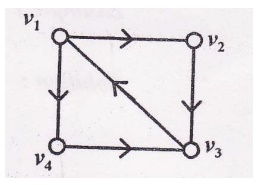 It is strongly connected graph. For,

similarly we can prove it for the remaining pair of vertices,each vertices is reachable from other.

Given graph is strongly connected

The possible Hamilton cycles are

Therefore G2 is not a Hamiltonian graph

(3)   A graph may contain more than one Hamiltonian cycle.

(4)   A complete graph kn, will always have a Hamiltonian cycle, when n>=3

Also, certain properties can be used to show that a graph

Example:Explain Konisberg bridge problem.Repersent the problem by mean of graph.Does the problem have a solution?

Solution: There are two islands A and B formed by a river.They are connected to each other and to the river banks C and D by means of 7-bridges

The problem is to start from any one of the 4 land areas.A,B,C,D, walk across each bridge exactly once and return to the starting point.(without swimmimg across the river)

This problem is the famous Konisberg bridge problem.

When the situation is represented by a graph,with vertices representating the land areas the edges representing the bridges,the graph will be shown as fig:

In a simple digraph,G=(V,E) every node of the digraph lies in exactly one strong component.

The problem is to find whether there is an Eulerian circuit or cycle(i.e.a circuit containing every edge exactly once) in a graph.

Here, we can not find a Eulerian circuit.Hence,Konisberg bridge problem has no solution .

A path of a graph G is called an Eulerian path,if it contains each edge of the graph exactly once.

An Eulerian circuit or cycle should satisfies the following conditions.

(1)Starting and ending points(vertices) or same.

(2)Cycle should contain all the edges of the graph but exactly once.

A connected graph is Euler graph(contains Eulerian circuit) if and only if each of its vertices is of even degree.

Let G be any graph having Eulerian circuit(cycle) and let “C” origin(and terminus) vertex as u.Each time a vertex as an internal of C,then two of the edges incident with v are accounted for degree.

Conversely, assume each of its vertices has an even degree.

Claim: G has an Eulerian circuit.Support not, i.e.,Assume G be a connected graph which is not having an Euler circuit with all vertices of even degree and less number of edges.That is ,any degree having less number of edges than G,then it has an Eulerian circuit.Since each vertex of G has degree atleast two,therefore G contains closed path.Let C be a closed path of maximum possible length in G.If C itself has all the edges of G,then C itself an Euler circuit in G.

By assumption,C is not an Euler circuit of G and G-E© has some componen |E(G’)|>0.C has less number of egdes than vertices of even degtee,thus the connected graph degree.Since |E(G’)|< |E(G)|,therefore G’ is vertex v in both C and C’. Now join’withC commen vertex v,we get CC’ is a closed pa the chioices of C.

G has an Eulerian circuit.