Visual image interpretation techniques have certain disadvantages and may require extensive training and are labour intensive.

As seen in the earlier chapters, remote sensing data can be analysed using visual image interpretation techniques if the data are in the hardcopy or pictorial form. It is used extensively to locate specific features and conditions, which are then geocoded for inclusion in GIS. Visual image interpretation techniques have certain disadvantages and may require extensive training and are labour intensive. In this technique, the spectral characteristics are not always fully evaluated because of the limited ability of the eye to discern tonal values and analyse the spectral changes. If the data are in digital mode, the remote sensing data can be analysed using digital image processing techniques and such a database can be used in raster GIS. In applications where spectral patterns are more informative, it is preferable to analyse digital data rather than pictorial data.

In today's world of advanced technology where most remote sensing data are recorded in digital format, virtually all image interpretation and analysis involves some element of digital processing. Digital image processing may involve numerous procedures including formatting and correcting of the data, digital enhancement to facilitate better visual interpretation, or even automated classification of targets and features entirely by computer. In order to process remote sensing imagery digitally, the data must be recorded and available in a digital form suitable for storage on a computer tape or disk. Obviously, the other requirement for digital image processing is a computer system, sometimes referred to as an image analysis system, with the appropriate hardware and software to process the data. Several commercially available software systems have been developed specifically for remote sensing image processing and analysis.

For discussion purposes, most of the common image processing functions available in image analysis systems can be categorized into the following four categories:

Preprocessing functions involve those operations that are normally required prior tothe maindata analysis and extraction of information, and are generally grouped as radiometric orgeometric corrections. Radiometric corrections include correcting the data for sensorirregularities and unwanted sensor or atmospheric noise, and converting the data so they accurately represent the reflected or emitted radiation measured by the sensor. Geometric corrections include correcting for geometric distortions due to sensor-Earth geometry variations, and conversion of the data to real world coordinates (e.g. latitude and longitude) on the Earth's surface. The objective of the second group of image processing functions grouped under the term of image enhancement, is solely to improve the appearance of theimagery to assist in visual interpretation and analysis. Examples of enhancement functionsinclude contrast stretching to increase the tonal distinction between various features in a scene, and spatial filtering to enhance (or suppress) specific spatial patterns in an image.

Image transformations are operations similar in concept to those for image enhancement.However, unlike image enhancement operations which are normally applied only to a single channel of data at a time, image transformations usually involve combined processing of data from multiple spectral bands. Arithmetic operations (i.e. subtraction, addition, multiplication, division) are performed to combine and transform the original bands into "new" images which better display or highlight certain features in the scene. We will look at some of these operations including various methods of spectral or band ratioing, and a procedure called principal components analysis which is used to more efficiently represent the information 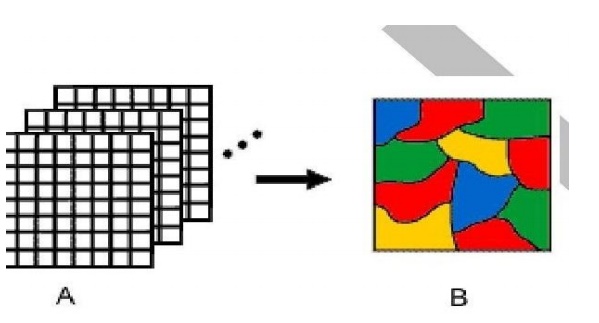 Image classification and analysis operations are used to digitally identify and classify pixelsin the data. Classification is usually performed on multi-channel data sets (A) and this process assigns each pixel in an image to a particular class or theme (B) based on statistical characteristics of the pixel brightness values. There are a variety of approaches taken to perform digital classification. We will briefly describe the two generic approaches which are used most often, namely supervised and unsupervised classification. In the following sections we will describe each of these four categories of digital image processing functions in more detail.

Pre-processing operations, sometimes referred to as image restoration and rectification, are intended to correct for sensor- and platform-specific radiometric and geometric distortions of data. Radiometric corrections may be necessary due to variations in scene illumination and viewing geometry, atmospheric conditions, and sensor noise and response. Each of these will vary depending on the specific sensor and platform used to acquire the data and the conditions during data acquisition. Also, it may be desirable to convert and/or calibrate the data to known (absolute) radiation or reflectance units to facilitate comparison between data.

Low sensitivity of the detectors, weak signal of the objects present on the earth surface, similar reflectance of different objects and environmental conditions at the time of recording are the major causes of low contrast of the image. Another problem that complicates photographic display of digital image is that the human eye is poor at discriminating the slight radiometric or spectral differences that may characterize the features. The main aim of digital enhancement is to amplify these slight differences for better clarity of the image scene. This means digital enhancement increases the separability (contrast) between the interested classes or features. The digital image enhancement may be defined as some mathematical operations that are to be applied to digital remote sensing input data to improve the visual appearance of an image for better interpretability or subsequent digital analysis (Lillesand and Keifer, 1979). Since the image quality is a subjective measure varying from person to person , there is no simple rule which may produce a single best result. Normally, two or more operations on the input image may suffice to fulfil the desire of the analyst, although the enhanced product may have a fraction of the total information stored in the original image. This will be realized after seeing the different contrast enhancement techniques in this

chapter. There are a number of general categories of enhancement techniques. As in many outer areas of knowledge, the distinction between one type of analysis andanother is a matter of personal taste and need of the interpreter. In remote sensing literature, many digital enhancement algorithms are available.