One of the most prevalent and successful method of protecting a circuit is to arrange relays to compare the currents entering and leaving it, which should be the same under normal conditions and during an external fault. Any difference current must be flowing in to a fault within the protected circuit

The figure below illustrates the principle of differential protection of generator and transformer, X is the winding of the protected machine. Where there is no internal fault, the current entering in X is equal in phase and magnitude to current leaving X. The CT's have such a ratio that during the normal conditions or for external faults (Through Faults) the secondary current of CT's are equal. These current say I1 and I2 circulate in the pilot wire. The polarity connections are such the current I1 and I2 are in the same direction of pilot wire during normal condition or external faults. Relay operation coil is connected at the middle of pilot wires. Relay unit is of over current type

During normal condition and external fault the protection system is balanced and the CT's ratios are such that secondary currents are equal. These current circulate in pilot wires. The vector differential current I1- I2 which flow through the relay coil is zero. I1-I2 = 0 (normal condition or external faults) This balance is disturbed for internal faults. When fault occurs in the protected zone, the current entering the protected winding is no more equal to the leaving the winding because some current flows to the fault. The differential I1-I2 flows through the relay operating coil and the relay operates if the operating torque is more than the restraining torque. The current I1 and I2 circulate in the secondary circuit. Hence CT's does not get damaged. Polarities of CT's should be proper, otherwise the currents I1 and I2 would add up even for normal condition and mal operate the relay.

• When this system is applied to electrical equipment (Generator stator windings, Transformer,

•  When it is applied to lines and cables it is called pilot differential protection because pilot wires or an equivalent link or channel is required to bring the current to the relay from the remote end of the line.

The CTs at both ends of the protected circuit connected so that for through load or through fault conditions current circulates between the interconnected CTs. The over-current relay is normally connected across equipotential points and therefore doesn‟t operate.

•  The current in the differential relay would be proportional to the phasor difference between the currents that enter and leave the protected circuit. If the current through the relay exceeds the pick-up value, then the relay will operate.

Though the saturation is avoided, there exist difference in the C.T. characteristics due to ratio error at high values of short circuit currents. This causes an appreciable difference in the secondary currents which can operate the relay. So the relay operates for through external faults.

This difficulty is overcome by using percentage differential relay. In this relay, the difference in current due to the ratio error exists and flows through relay coil. But at the same time the average current ( I1 + I2/2) flows through the restraining coil which produces enough restraining torque. Hence relay becomes inoperative for the through faults.

To alter the voltage and current ratios between high voltage and low voltage sides of a power transformer, a tap changing equipment is used. This is an important feature of a power transformer. This equipment effectively alters the turns ratio. This causes unbalance on both sides. To compensate for this effect, the tapping can be provided on C.T.s also which are to be varied similar to the main power transformer. But this method is not practicable. The percentage differential relays ensure relays ensure the stability with respect to the amount of unbalance occurring at the extremities of the tap change range.

The factors which affect the magnitude and direction of the magnetizing inrush current can be one of the following reasons.

a. Size of the transformer.

b.   Size of the power system

c. Type of magnetic material used for the core.

d. The amount of residual flux existing before energizing the transformer.

e. The method by which transformer is energized.

If the transformer is energized when the voltage wave is passing through zero, the magnetizing current inrush is maximum. At this instant, the current and flux should be maximum in highly inductive circuit. And in a half wave flux reversal must take place to attain maximum value in the other half cycles. If the residual flux exists, the required flux may be in same or opposite direction. Due to this magnetizing current inrush is less or more. If it is more, it is responsible to saturate the core which further increases its component. This current decays rapidly for first few cycles and then decays slowly. The time constant L/R of the circuit is variable as inductance of circuit varies due to the change in permeability of the core. The losses in the circuit damp the inrush currents. Depending on the size of the transformer, the time constant of inrush current varies from 0.2 sec to 1 sec. The waveforms of magnetizing inrush current in three phases are shown in the figure below. 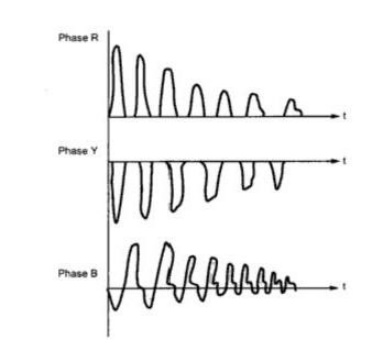