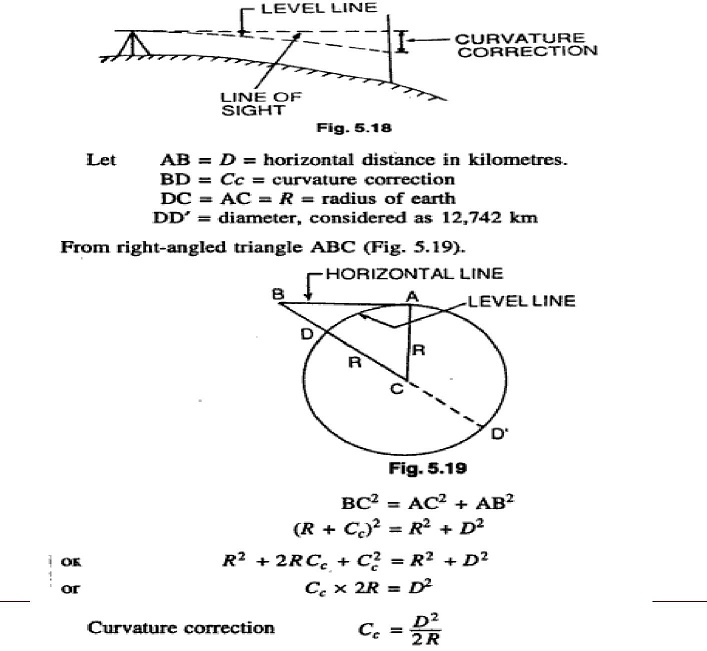 A schematic diagram of an engineer's level is shown in. An engineer's level primarily consists of a telescope mounted upon a level bar which is rigidly fastened to the spindle. Inside the tube of the telescope, there are objective and eye piece lens at the either end of the tube. A diaphragm fitted with cross hairs is present near the eye piece end. A focussing screw is attached with the telescope. A level tube housing a sensitive plate bubble is attached to the telescope (or to the level bar) and parallel to it. The spindle fits into a cone-shaped bearing of the leveling head. The leveling head consists of tribrach and trivet with three foot screws known as leveling screws in between. The trivet is attached to a tripod stand. It is simple compact and stable. The telescope is rigidly fixed to its support therefore cannot be rotated about its longitudinal axis. A long bubble tube is attached to the top of telescope. Dumpy literally means short and thick. 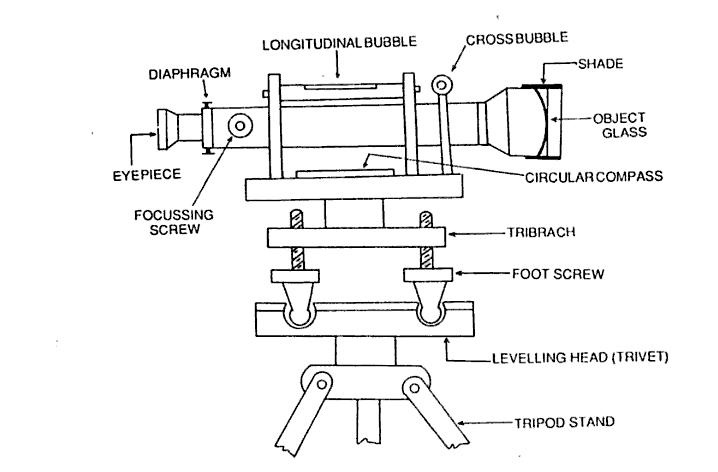 Telescope : used to sight a staff placed at desired station and to read staff reading distinctly.

Diaphragm : holds the cross hairs (fitted with it).

Eye piece : magnifies the image formed in the plane of the diaphragm and thus to read staff during leveling.

Level Tube : used to make the axis of the telescope horizontal and thus the line of sight.

Leveling screws : to adjust instrument (level) so that the line of sight is horizontal for any orientation of the telescope.

Tripod stand : to fix the instrument (level) at a convenient height of an observer.

A reversible level combines the features of bioth the dumpy level and the Wye level. The telescope is supported by two rigid sockets into which the telescope can be introduced from either end and then fixed in position by a screw. The sockets are rigidly connected to the spindle through a stage.

It consists of a telescope attached with a level tube which can be tilted within few degrees in vertical plane by a tilting screw.

The main peculiarity of this level is that the vertical axis need not be truly vertical, since the line of collimation is not perpendicular to it. The line of collimation, is, however, made horizontal for each pointing of telescope by means of tilting screw. It is mainly designed for precise leveling work.

There are fundamentally two types of automatic levels.

First, the optical one whose distinguishing feature is self-leveling i.e., the instruments gets approximately leveled by means of a circular spirit level and then it maintains a horizontal line of sight of its own.

Second, the digital levels whose distinguishing features are automatic leveling, reading and recording.