This condition varies with age and severity. Vocabulary, word-finding, sentence length, variety of expression and grammatical complexity may all be reduced. Most children with the develop-mental subtype of this disorder demonstrate delayed language development. Often auxiliary words or prepositions are omitted, resulting in telegraphic speech: “he was going to school” becomes “he going school”. Word order may be garbled: “Him like too me” for “I like him, too”. Words or phrases may be repeated to the degree that speech may be echolalic, perseverative, or both. Con-versation may be tangential, with sudden inappropriate changes of topic, or conversely, perseveration. Pragmatic difficulties, such as in initiating or terminating conversations, are seen, as is avoidance of conversation. These children frequently are regarded as socially inappropriate or inept, and at times may be suspected of having a formal thought disorder or a Pervasive Developmental Disorder. They frequently have academic problems because of their diffi-culty in responding verbally to exercises. They may have motor coordination problems and various other neurodevelopmental ab-normalities, documented upon neurological examination, EEG, or neuroimaging, although no consistent patterns are seen.

Children with this disorder may have all the problems of Expres-sive Language Disorder. In addition, they do not understand all that they hear. The deficits may be mild or severe, and at times deceptively subtle, since patients may conceal them or avoid in-teraction. All areas and levels of language comprehension may be disturbed. Thus the child may not understand speech that is rapid, certain words or categories of words, such as abstract quan-tities, or types of statements, such as conditional clauses. These children may seem not to hear or attend, or to misbehave by not following commands correctly. At times, when conversation is redirected to them in a slower or more concise fashion, they may understand and respond belatedly, and thereby be accused of willful avoidance. More severely impaired children may not fol-low the rules of syntax or word order, and thus confuse subjects and objects or questions and declarations. Often in more severe cases, disabilities may be multiple and pervasive, affecting pro-cessing, recall and association. Such deficits have immense social consequences.

This category is characterized by persistent errors in the pro-duction of speech. These include omission, substitution or dis-tortion of sounds. Omissions include single or multiple sounds: “I go o coo o the but” (I go to school on the bus); or “I re a boo” (I read a book). Substitutions include w/l, t/s, w/r, and d/g  “I taw a wittle wed wadio. It pwayed dood music”. Lisping, the frontal or lateral misarticulation of sibilants, is a common distortion. Defects in the order of sounds or insertions of extra-neous sounds may also be heard: “catht” for “cats”. The occur-rence of these errors is persistent but not constant. Usually only some sounds are affected. Some articulation errors are expected in early childhood, especially involving sounds that are usually mastered at a later age (in English, /l/, /r/, /s/, /z/, /th/, /ch/); these errors are not regarded as pathological unless they persist and result in adverse consequences to the individual. Ninety percent or more of children have mastered the more difficult sounds by age 6 to 8.

Stuttering is the most easily recognized communication disorder. It varies in severity among individuals. It may vary over time and circumstance. It is typically more severe when the affected child is stressed or anxious, and especially when communication is ex-pected. Because of its often gradual onset, children are at first frequently not aware of its presence. Over time they may become more anxious and withdraw from conversation, as the degree of social discrimination they experience increases. Stuttering may be accompanied by various movements which may seem either to express or discharge anxiety, such as blinking, grimacing, or hyperventilation. Children who stutter may sing or talk to them-selves without difficulty. Sometimes children may attempt to stop stuttering by slowing down or pausing in their speech; but this is frequently unsuccessful and leads to an exacerbation. Thus a pat-tern of habitual fear and avoidance emerges.

This category, used to include disorders that do not fit the criteria for any of the other Communication Disorders, is generally used only to describe disorders of voice, including pitch, intonation, volume, or resonance. Hyponasality is characterized by the “ad-enoidal” speech simulated by speaking with the nose pinched. Hypernasality, secondary to velopharyngeal insufficiency, may be associated with serious voice problems. Air escapes into the nasal cavity, resulting in nasal air emission, snorting or a nasal grimace during speech.

For younger children, assessment may best be carried out in a play situation. Rutter (1987) recommends that the clinician assess inner language, comprehension, production, phonation and pragmatics. Inner language means symbolization, which may be observed in the child’s representational use of play ma-terials. Comprehension is assessed through conversation and the use of developmentally appropriate questions and commands, especially with nonverbal augments or prompts. The clinician should note how well a child can follow and draw inferences from a conversation. Production refers to speech, its fluency and intel-ligibility. Pragmatics are those aspects of language that render it useful for social communication beyond the most concrete level. Does the child appreciate the nuances of her partner’s conver-sation, as, for example, when they signal beginnings and end-ings of conversations, topic changes, or the patient’s turn to talk? Pragmatic language involves nonverbal elements. Deficiencies in this area impair abstraction and may render the individual almost “robot-like”.

In all cases, observations should be made in as relaxed a fashion as possible, avoiding interrogation or rote exercises. If a child fails to communicate a given item, necessary help, in-cluding nonverbal prompts, should be offered, so that the child has the experience of success. A sense of failure will stifle communication.

All of the phenomena seen in a clinical interview may also be pursued in school settings, and teacher input is essential in the evaluation of these children.

The need for a clinician to be aware of normal developmental expectations has been cited. Special sensitivity must be exer-cised for the range of accents, dialects and conversational styles encountered. English is spoken in an extraordinary range of patterns even within each dialect group. It is essential that one does not pathologize differences in intonation or dialect. Many American children grow up in multilingual environments, and speak with a synthesis of languages, especially during their pre-school years. Finally, children of minority groups who have suf-fered social discrimination and children who live in physically dangerous environments may necessarily be cautious and less forthcoming with language; this may be adaptive in some cases and not a disorder at all.

These disorders are distinguished from each other by the pres-ence or absence of receptive problems. Children with autism may have any or all of the characteristics of the language disorders. However, they have many additional problems including the use of language in a restricted and often ste-reotypic fashion, rather than for communicative purposes. They also have difficulties with a wider range of interactions with persons and objects in their environment, and exhibit a restricted range of behaviors. The language impairments of mental retardation, oral-motor deficits, or environmenta deprivation are not diagnosed in this category unless they are well in excess of what is expected. Language impairment due to environmental deprivation tends to improve dramatically with environmental improvement. Sensory deficits, especially hearing impairment, may restrict language development. Any indication of potential hearing impairment, no matter how tenuous, should prompt a referral for an audiologic evalua-tion. Obviously, hearing and language disorders can and do coexist. Some children develop an acquired aphasia as a com-plication of general medical illness. This condition is usually temporary; only if it persists beyond the acute course of the medical illness is a language disorder diagnosed. A very se-vere acquired language disorder is seen in Landau-Kleffner Syndrome (acquired epileptic aphasia), accompanied by sei-zures and other CNS dysfunctions, and usually occurring between the ages of three and nine.

The conditions should be distinguished from normal dysfluen-cies in young children. For example, misarticulation of some sounds, such as /l/, /r/, /s/, /z/, /th/, and /ch/, is common among pre-schoolers and resolves with age. As with the language disorders, these diagnoses are given in the case of motor of sensory deficit, mental retardation, or environmental deprivation only if the dis-order is much more severe than expected in these conditions. Problems limited to voice alone are included under Communica-tion Disorder NOS.

A number of instruments are available for the assessment of communication. Some of these are listed in Table 26.3. Most are beyond the training of physicians, whose most important con-tributions are interview skills and medical assessment; but a fa-miliarity with them can help the physician develop a repertoire and knowledge of screening measures. Because of the complex comorbidity of these disorders, they are often best assessed by an interdisciplinary team (McKirdy, 1985; Klykylo, 2005). The team’s activities are usually coordinated by a case manager, of-ten a pediatrician or a child and adolescent psychiatrist. Often the team includes an audiologist, a psychologist, medical special-ists including pediatric neurologists and otorhinolaryngolists, an educational specialist or liaison special educator, and a speech and language pathologist. 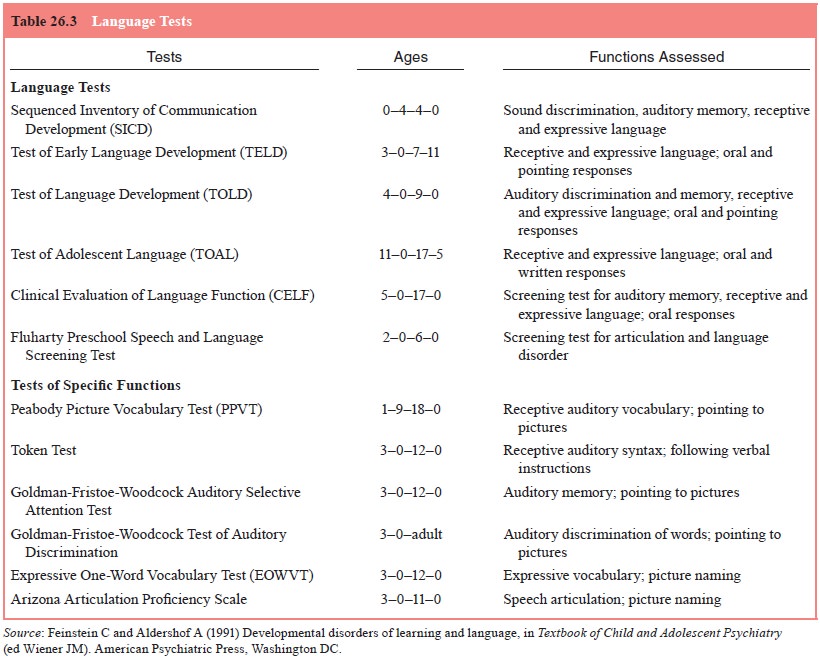 Speech, Language and Hearing Association (ASHA). The SLP uses a combination of interview techniques, behavioral observations and standardized instruments to identify Communication Disor-ders, as well as patterns of communication that are not pathologic. The assessment of an SLP is usually the definitive measure of the presence or absence of a Communication Disorder. Families may consult an SLP directly or be referred by other clinicians. The responsibility of psychiatrists and other professionals in this process is simple and straightforward: any suspicion of any com-munication problem in any patient should prompt referral to a qualified SLP. Even when a disorder appears to be limited and benign, communication evaluation by an SLP can disclose subtle impairments that could have profound consequences. Table 26.4 lists indication for referral. 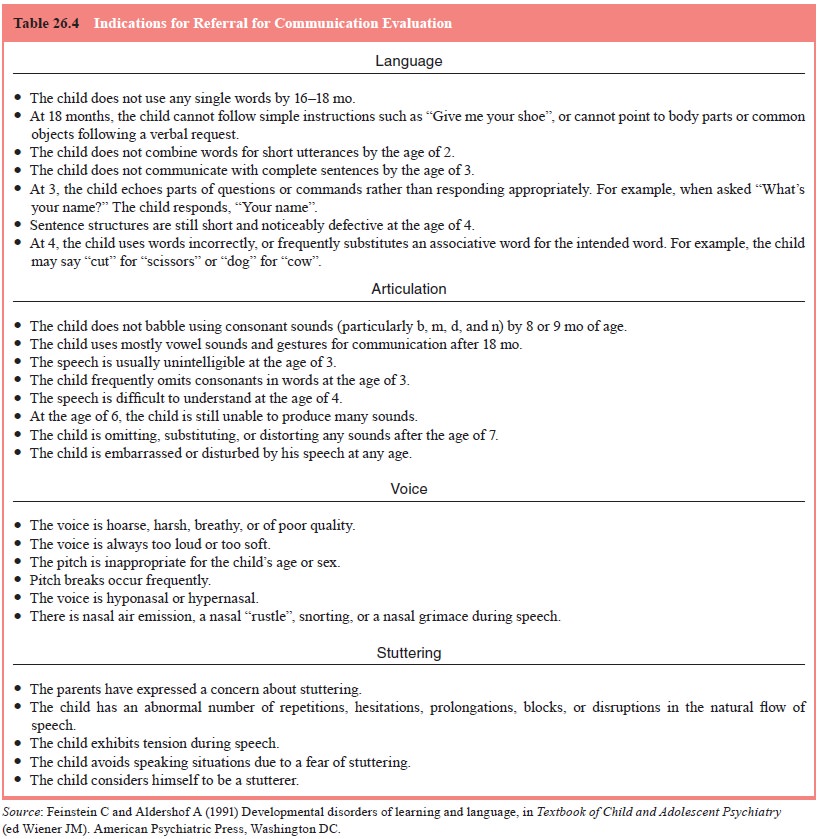