Psychiatric practice depends upon communication and language. Language and or learning disorders have been linked in the past, but in DSM-IV-TR (American Psychiatric Association, 2000) they are regarded as separate although often associated condi-tions. This section covers: Expressive Language Disorder, Mixed Receptive-Expressive Language Disorders, Phonological Disor-der, Stuttering and Communication Disorder NOS. These disor-ders share many common features, as noted in Table 26.1. They are defined by criteria in DSM-IV-TR. In all cases a test score or assessment measure alone does not define these conditions. An individual must also experience social, academic or occupational difficulties directly related to the condition. 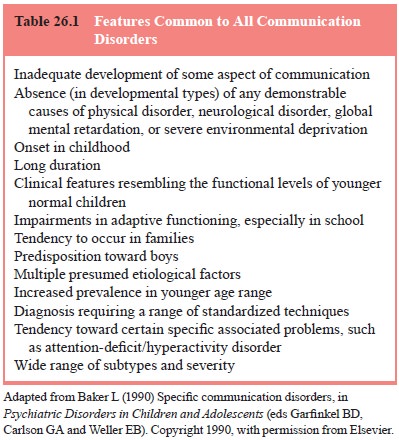 Outside of DSM-IV-TR, the term “phonologic disorder” may refer to a condition characterized by difficulty in generat-ing sound combinations, as for example in the case of laryngeal dysfunction.

Prevalences varying from 1 to 13% have been reported for lan-guage disorders, and numbers as high as 32% for speech disorders (Baker, 1990). In development of the DSM-IV-TR, researchers found that

·           3–7% of all children were suspected of having a developmen-tal Expressive Language Disorder.

·           Mixed Expressive – Receptive Language Disorder appears in up to 3% of school-age children.

Cantwell and Baker (1991) demonstrated that approximately half of the children with a speech or language disorder have some other definable Axis I clinical disorder. Similarly, among children with a psychiatric diagnosis first made, there is a remarkably increased likelihood of speech and language disorders, which often go un-detected. Beitchman (1985) found more than four times the preva-lence of psychiatric illness in kindergartners with communication disorders compared with nondisordered children. Cantwell and Baker also found that psychiatric illness in their population was associated with greater severity of communication problems.

Conversely, the presence of communication disorders may be associated with increased severity of some psychiatric conditions, most notably the Disruptive Behavior Disorders. Physicians must recognize that these disorders do not occur in an isolated context

Phonological Disorder and Learning Disorders are common among children with this disorder. Other neurodevelopmental conditions are also seen, such as motor delays, coordination disorders and enuresis, although the rate of association is un-certain. These disorders and the stresses they create frequently lead to Adjustment Disorders and social withdrawal. Cantwell and Baker (1991) found that the most common psychiatric disor-der among children with communication disorders overall was Attention Deficit Hyperactivity Disorder (ADHD), representing 19% of their sample of 600 children referred for a communi-cation evaluation. Some authors have speculated that ADHD may be concordant with an entity known as Central Auditory Processing Disorder (CAPD), which refers to deficits in the pro-cessing of audible signals, and which can be subsumed under the DSM-IV language disorders. A total concordance is unlikely, but Riccio et al. (1994) suggest that 50% of children with CAPD also have ADHD.

Children with this problem may have clear causal factors, such as anatomic, neurological, or cognitive disorders, al-though most do not. They do have a higher prevalence of language disorders, with all their associated problems, than do normal controls. They appear more likely to have ADHD, though probably not as commonly as do children with lan-guage disorders. Children with Phonological Disorders, es-pecially when associated with stuttering or hyperactivity, are prone to social discrimination and isolation, with subsequent consequences.

Other communication disorders are more frequently reported in those with stuttering than in normal controls. Stuttering is frequently accompanied by many linguistic mechanisms and social maneuvers to avoid its manifestation, and is often exac-erbated by anxiety or stress. Persons with stuttering face social discrimination. They have been mocked in drama and cinema (including cartoons) for centuries, and all too often are regarded as intellectually impaired.

No clear mechanisms of genetic transmission have been elu-cidated, but a number of instances of family aggregation have been reported. At least one of these (Gopnik and Crago, 1991) suggested the presence of a single dominant autosomal gene. Tomblin (1989) reported increased concordance of language disorders among siblings. An increasing number of family studies now suggest that these disorders are familial, includ-ing the Twins Early Development Study (TEDS) in the United Kingdom (Plomin and Dale, 2000). These reports cannot ab-solutely prove any genetic hypothesis but are provocative and suggest a polygenetic basis.

A genetic basis for stuttering has been proposed for many years. The Yale Family Study of Stuttering suggested that 15% of first degree relatives of probands are affected at some time in their lives (Kidd, 1983).

Communication disorders arise from at least three interrelated sets of factors: neurophysiologic (including structural), cogni-tive-perceptual and environmental. However, the great majority of children with communication disorders exhibit no specific CNS damage, and thus minimal or subclinical damage has been postulated. The relative frequency of “soft” neurologic signs and lateral dominance problems in this population provokes this speculation. However, no clear neurophysiologic mechanisms or pathology can be correlated with these disorders. Some interest-ing findings are emerging, including suggested anatomical dif-ferences in the left cerebral cortex in stuttering, prenatal alcohol exposure and the physical sequelae of abuse and neglect.

Perceptual hypotheses relate communication disorders to various deficits in the reception, acquisition, processing, storage, or recall of different elements of communication. Table 26.2 notes various perceptual deficits that have been implicated, including auditory 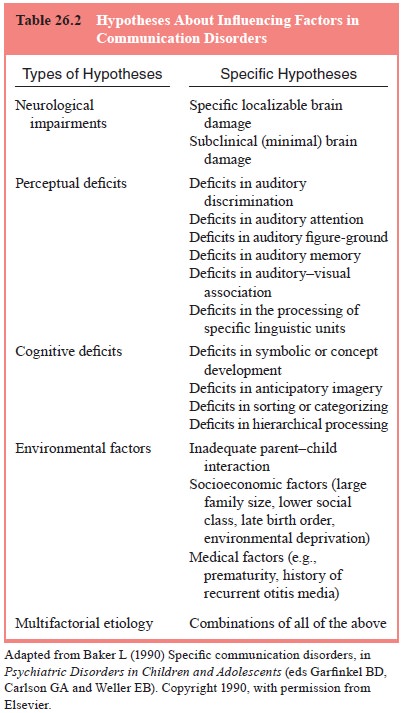 discrimination, attention, memory and visual association. More purely cognitive hypotheses have also been proposed, involving deficits in symbolization, categorizing, hierarchical processing and related areas. Some authors (Friel-Patti, 1992; Helmuth, 2001) propose that there are certain language-specific cognitive deficits. The special phenomenology of stuttering suggests the possibility of dyssynchrony between phonation and articulation, as reported by Perkins (2001).

This category refers both to the psychosocial environment of the child and to general medical factors such as perinatal complica-tions or recurrent otitis media.

The relationship of socioeconomic status to the occurrence of communication disorders is uncertain. Variables such as class, family size, income and birth order all clearly affect the amount of verbal interaction children receive and have been implicated. The association between the exacerbation of stuttering and stress is well known, although work in this area has frequently con-founded predisposing, triggering and maintaining factors.

Review of these influences reveals a considerable amount of overlap, and clinical observation seldom if ever suggests a uni-tary causality of Communication Disorders in real patients.