By the middle of the 1960s the scenario with regard to food production was very grim. The country was incurring enormous expenditure on importing food. Land reforms had made no impact on agricultural production. The government therefore turned to technological alternatives to develop agriculture. High Yielding Variety (HYV) of seeds of wheat and rice was adopted in 1965 in select areas well endowed with irrigation.

Unlike traditional agriculture, cultivation of HYV seeds required a lot of water and use of tractors, chemical fertilizers and pesticides. The success of the initial experimental projects led to the large-scale adoption of HYV seeds across the country. This is generally referred to as the Green Revolution. This also created an enormous demand for chemical fertilizers and pesticides, and these industries grew as well. 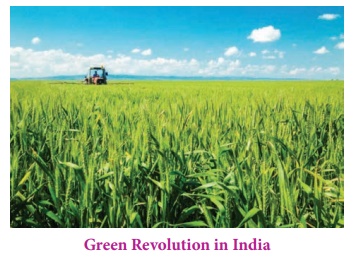 Finally, within twenty years, India achieved self-sufficiency in food production. Total rice production increased from 35 million tonnes in 1960–61 to 104 million tonnes in 2011–12. The increase in wheat production was even more impressive, from 11 million tonnes to 94 million tonnes during the same period. Productivity also increased. A large reserve stock of food grain was built up by the government through buying the surplus food grain from the farmers and storing this in warehouses of the Food Corporation of India (FCI). The stored food grains were made available under the Public Distribution System (PDS) and to ensure food security for the people.

Another positive feature has been the sustained increase in the production of milk and eggs. Due to this, the food basket of all income groups became more diversified.

While the Green Revolution has been very successful in terms of increasing food production in India, it has also had some negative outcomes. First of all, it increased the disparities between the well-endowed and the less well-endowed regions. Over the decades, there has been a tendency among farmers to use chemical fertilizers and pesticides in excessive quantities resulting in environmental problems. There is now a move to go back to organic farming in many parts of the country. The lesson to be learnt is that development comes at a certain cost.

Poverty prevailed both in rural and urban areas. But since nearly three-fourths of the population lived in rural areas, rural poverty was a much more critical problem requiring immediate attention. Poverty levels were also much higher among specific social groups such as small and marginal farmers, landless labourers and depressed classes in resource poor regions without irrigation and with poor soil, etc.

A whole range of rural development programmes was introduced by the government to tackle rural poverty. These included Community Development Programmes, reviving local institutions like Panchayati Raj, and targeted programmes aimed at specific groups such as small and marginal farmers. The thrust was on providing additional sources of income to the rural households to augment their earnings from agriculture. Two major programmes are explained in greater detail below.

In 1980 a consolidated rural development programme called Integrated Rural Development Programme was introduced. The purpose was to provide rural households with assets which would improve their economic position, so that they would be able to come out of poverty. These could be improvements to the land, supply of cows or goats for dairying or help to set up small shops or other trade-related businesses. Introduced in all the 5011 blocks in the country, the target was to provide assistance to 600 families in each block over five years (1980–1985), which would reach a total of 15 million families.

The capital cost of the assets provided was covered by subsidies (divided equally between the Centre and the States) and loans. The subsidy varied according to the economic situation of the family receiving assistance. For small farmers, the subsidy component was 25%, 33.3% for marginal farmers and agricultural labourers, and 50% for tribal households. Banks were to give loans to the selected households to cover the balance of the cost of the asset. About 53.5 million households were covered under the programme till 1999.

Dairy animals accounted for 50% of the assets, non-farm activities for 25% and minor irrigation works for about 15%. The functioning and the effects of IRDP were assessed by many economists as well as government bodies. These studies raised many questions about the end result.

Lack of proper selection procedures for identification of beneficiaries, insufficient investment per household, absence of post implementation audits of the scheme, regional disparities in lifting the identified beneficiaries above the poverty line was a major issue.

Considering the limited success achieved by the programme it was restructured in 1999 as a programme to promote self-employment of the rural poor.

Over the years, due to concerted efforts, the percentage of households below the poverty line has come down substantially in India. It is now widely recognised that eradicating rural poverty can be achieved only by expanding the scope for non-agricultural employment. Many programmes to generate additional employment had been introduced over the years. Many were merged with the employment guarantee scheme, which is now the biggest programme on this front in the country. 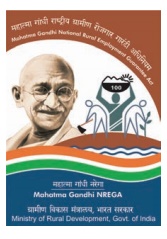 The National Rural Employment Guarantee Act (subsequently renamed MGNREGA after Mahatma Gandhi) was passed in 2005, with the aim of providing livelihood security to poor rural households. This was to be achieved by giving at least 100 days of wage employment each year to adult members of every household willing to do unskilled manual work. This would provide a cushion to poor rural households which could not get any work in the lean agricultural season which lasted for about three months each year. In this exercise, the work undertaken would create durable assets in rural areas like roads, canals, minor irrigation works and restoration of traditional water bodies.

The earlier targeted programmes of rural development were based on the identification of below poverty line families, which had led to several complaints that ineligible families had been selected. MGNREGA, however, is applicable to all rural households. The reasoning is that it is a self-targeting scheme, because persons with education or from more affluent backgrounds would not come forward to do manual work at minimum wages.

The earlier employment generation programmes did not give the rural poor any right to demand and get work. The significant feature of this Act is that they have the legal right to demand work. The programme is implemented by Gram Panchayats. The applicants have to apply for this work and are provided with job cards. Work is to be provided by the local authorities within 15 days. If not, the applicant is entitled to an unemployment allowance. The work site should be located within five kilometres of the house of the applicant.

No contractors are to be involved. This is to avoid the profits which will be taken by the middlemen thus cutting into the wages. The ratio of wages to capital investment should be 60:40. One-third of the workers would be women. Men and women would be paid the same wage.

As with all government programmes, many studies have brought out the weaknesses in the implementation of MGNREGA. On the positive side, agricultural wages have gone up due to the improved bargaining power of labour. This has also reduced the migration of agricultural workers to urban areas during the lean period or during droughts. One of the most important benefits is that women are participating in the works in large numbers and have been empowered by the programme.

Wages of the workers are paid directly into bank accounts or post office accounts to ensure transparency and hassle - free transfer of payments. The involvement of civil society organisations, non-governmental organisations and political representatives, and a more responsive attitude of the civil servants have improved the functioning of MGNREGA in states like Tamil Nadu, Andhra Pradesh and Rajasthan. Efficiency has increased up to 97%.

Between 2006 and 2012, around ₹ 1,10, 000 crores had been distributed directly as wage payment under the programme, generating 1200 crore person-days of employment. In spite of many shortcomings, the functioning of the programme has improved due to higher levels of consciousness among the rural poor and concerned civil society organisations. Though many critics feel that the high expenditure involved in the programme increases the fiscal deficit, the programme remains popular and nearly one-fourth of all rural households participate in the programme each year.