Systemic toxicity of local anesthetics is the result of the effect of excess plasma concentrations of these drugs on the central nervous system and cardiovascular system. 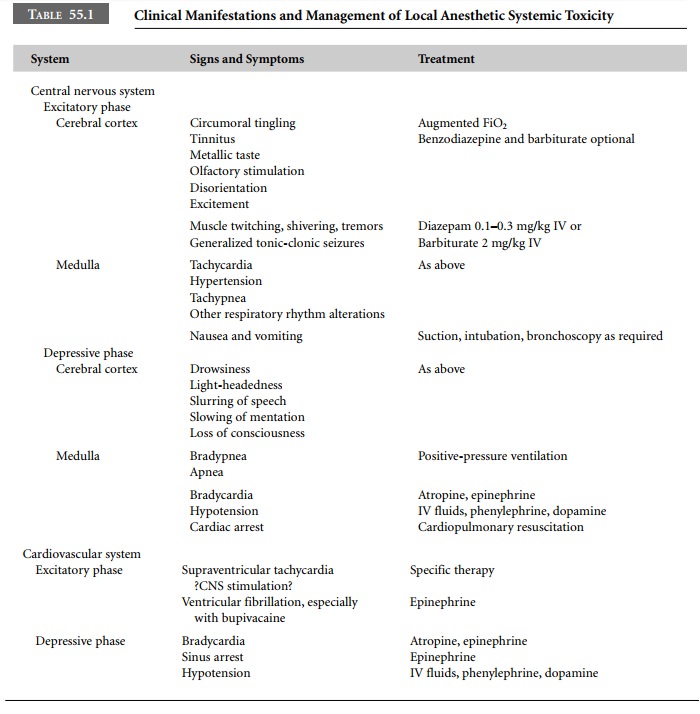 The cardiovascular system is not as vulnerable to local anesthetic toxicity as the central nervous system. Local anesthetics act directly on the heart by blocking cardiac Na+ channels, to produce both electrophysiologic and mechanical effects.

They decrease the rate of depolarization in Purkinje fibers and ventricular muscle. Consequently, heart rate decreases as automaticity and conduction slow, manifesting on the electrocardiogram as P-R interval prolon-gation and QRS complex widening. Profound hypotension from arteriolar vascular smooth muscle relaxation and direct myocardial depression can occur. Ventricular dysrhythmias, including ventricular fibrillation, may also manifest. Local anesthetics differ in their ability to produce cardiac toxicity. The most potent local anesthetics, bupivacaine, etidocaine, and tetracaine, affect rhythm and contractility at lower blood concentrations than less potent agents. Bupivacaine has a greater tendency to produce cardiac toxicity (selective cardiac toxicity) compared with other agents because of the slow dissociation of highly lipid-soluble bupivacaine from cardiac Na+ channels. This results in an exaggerated and persistent depressant effect of bupivacaine on cardiac function. The dextroisomer of bupivacaine is believed to be responsible for the anesthetic’s systemic toxic effects. Thus, ropivacaine and levobupivacaine, both pure levoisomers, are less cardiotoxic than bupivacaine. Bupivacaine seems to be more cardiotoxic in pregnant patients. Resuscitation from bupivacaine-induced cardiac arrest requires massive doses of epinephrine and atropine.

Cocaine is unique among all local anesthetics because it impairs reuptake of norepinephrine. The norepinephrine that is not returned to storage granules produces vaso-constriction. Use of 10% cocaine has been associated with coronary artery constriction and dysrhythmias. Four percent cocaine functions well as a local vasoconstrictor without these side-effects.

Prilocaine and benzocaine have been reported to pro-duce methemoglobinemia. Prilocaine at doses higher than 600 mg may result in the accumulation of ortho-toluidine and nitro-toluidine, both of which are capable of causing methemoglobin formation. Patients with methemoglo-binemia may appear cyanotic and their blood may be chocolate-colored because of the impaired oxygen transport. Treatment of significant methemoglobinemia requires intra-venous administration of methylene blue.

In addition to systemic toxicity, the use of local anes-thetics for spinal and epidural anesthesia may result in transient radicular irritation or overt neurotoxicity as manifested by the cauda equina syndrome. Transient radic-ular irritation, the majority of cases occurring in the lumbar and sacral areas, produces moderate to severe pain in the lower back, buttocks, and posterior thighs that occurs within 24 hours after complete recovery from spinal anesthesia. Full neurologic recovery usually occurs within a week. Lidocaine, with concentrations ranging from 0.5% to 5%, seems to be associated with a higher incidence of transient radicular irritation compared with bupivacaine or tetracaine. Furthermore, the incidence seems to be increased when the lithotomy position is used during surgery. Though the etiology of the radicular irritation is still unknown, use of lidocaine doses greater than 80– 100 mg for spinal anesthesia has been questioned.

Cauda equina syndrome has been reported following cases that are believed to have concentrated subarachnoid lidocaine and/or bupivacaine at the cauda equina. This syndrome was reported as a complication of continuous spinal anesthesia with lidocaine 5% and the usage of small microcatheters. Pooling of very high local anesthetic concentration on dependent nerves is thought to be contributory. For this reason, microcatheters were removed from the market. However, rare occurrences of this syndrome continue to be reported despite the absence of micro-catheters. They may be due to the accidental subarachnoid injection of the intended epidural dose, repeat administra-tion of local anesthetic after a failed spinal anesthetic, or the use of large doses of local anesthetic during continuous spinal anesthesia without the use of microcatheters. The syn-drome presents with varying degrees of sensory anesthesia, bowel and bladder sphincter dysfunction, and paraplegia.