Describe the management options for a patient who, after induction of anesthesia

Describe the management options for a patient who, after induction of anesthesia, unexpectedly cannot be intubated with a Macintosh blade. This patient has a good mask airway.

Describe the management options for a patient who, after induction of anesthesia, unexpectedly cannot be intubated with a Macintosh blade. This patient has a good mask airway.

Having induced general anesthesia in a patient and then discovered a difficult intubation, it is imperative to maintain oxygenation and ventilation. This is generally accom-plished with a facemask and 100% oxygen. Successful oxygenation during controlled ventilation and desaturation during intubation attempts are monitored with pulse oximetry. During traditional laryngoscopy, external posterior and/or lateral displacement of the larynx may bring it into view. Improved sniffing position may be helpful.

A multitude of retraction blades exist and vary in length and shape. They are used to displace the base of the tongue and epiglottis anterior to the line of vision. The most familiar types are the Macintosh and Miller blades. Difficulty with the Macintosh blade often arises when its tip fails to elevate the hyoid bone, which indirectly raises the epiglottis. Often, a straight blade elevates a floppy epiglottis when curved blades fail to do so. Difficulty with the straight blade frequently comes from impacting on teeth. The Siker blade was developed to view the “anterior larynx” but is extremely difficult to use because the laryngo-scopist must learn to work with a mirror image. The Bellscope, a bent straight blade, offers the advantages of the Macintosh and Miller blades, as well as improved anterior vision by employing angulation and a prism, rather than a mirror. The Bullard and Wu laryngoscopes incorporate a fiberoptic viewing system and a broad retraction blade. Consequently, sniffing position is not as important when using these laryngoscopes. They may be of greatest potential benefit for those whose head must remain flat on the bed, such as the patient with cervical spine fractures. A working channel is provided for suctioning, administra-tion of local anesthetics, or insufflation of oxygen. Both the Bullard and Wu laryngoscopes require a mouth opening sufficiently wide to accommodate the broad retraction blade and endotracheal tube. Blood and secretions in the airway tend to impair the view through fiberoptic systems. Upper airway edema or adipose tissue may sometimes encroach on the view of traditional retraction laryngoscopes, which are open on the right side. A two-piece tubular laryn-goscope such as the Wu scope can overcome this problem.

Various stylets may be used. The hollow stylet, gummed elastic bougie, or similar devices should be available in all anesthetizing locations. High-technology variations, such as illuminating stylets, work well in the average adult but are associated with false-positives and false-negatives in the very thin and obese. Illuminating stylets function on the principle of transillumination. As the light bulb enters the trachea, transilluminated light remains bright and circumscribed. If the stylet enters the esophagus, the light becomes more diffuse. Factors impairing its usefulness include anterior cervical scars, obesity, neck tumors, blood, or secretions. Macintosh first described this technique in 1957. Over the ensuing five decades, it has not gained popularity.

If a flexible fiberoptic laryngoscopy is not planned, then blind spontaneously breathing nasal tracheal intubation is an alternative offering a good chance of success. Vasoconstriction of the nasal mucosa, selection of a small nasal tracheal tube (6 mm), and generous lubrication of the tube’s distal portion are highly recommended. If flexi-ble fiberoptic intubation is planned, then the risk of epi-staxis may dissuade one from the nasal approach. Epistaxis might seriously impair mask ventilation and visualization by all means of laryngoscopy.

Retrograde guided techniques are highly successful but have not gained popularity. The cricothyroid membrane is pierced by a 16-gauge needle at a 30° angle pointing cepha-lad. Confirmation of proper placement is achieved by aspi-rating air into a syringe. The needle remains in situ, and a thin wire is passed through the needle until it exits the mouth or nose. The wire is clamped outside the neck to anchor its distal end. The endotracheal tube is advanced over the guidewire and into the trachea. Several predictable problems occur with this technique. After the wire is threaded retrograde through the airway, it may not exit the mouth or nose. Laryngoscopy and retrieval with a clamp may be necessary. Advancement of the endotracheal tube along the wire may be blocked by the arytenoids. To over-come this problem, the endotracheal tube is retracted 1–2 cm and rotated 90° counterclockwise. Progression beyond the vocal cords and into the trachea may be prevented by the guidewire as it exits the neck and tethers the endotracheal tube at a distance of 1–2 cm into the trachea.

Alternatively, the portion of the guidewire that exits the mouth or nose can be threaded through the working channel of a flexible fiberoptic laryngoscope. The scope is then advanced over the wire, under direct vision, through the vocal cords. In this way passage through the vocal cords and into the trachea is confirmed visually. Once positioned properly in the trachea, the endotracheal tube can be advanced over the fiberscope, and its proper location above the carina confirmed.

Compared with various retraction blades and stylets, flexible fiberoptic laryngoscopy has established a long and impressive success record with difficult intubations. Flexible fiberoptic laryngoscopy is applicable to the anes-thetized and awake patient. In the anesthetized patient, it can be performed with interrupted controlled ventilation by facemask, such as with traditional rigid laryngoscopy. Alternatively, it can be accomplished using simultaneous controlled ventilation via anesthesia facemasks equipped with a self-sealing diaphragm.

Flexible fiberoptic intubation in the paralyzed patient is generally more difficult than in the spontaneously breathing patient because the anterior pharyngeal wall tends to collapse onto the posterior pharyngeal wall, thereby obstructing the view. Also, the larynx assumes a more anterior position, hindering its identification. Copious blood and/or secretions seriously impair vision through a flexible fiberoptic laryngo-scope (FFL). FFLs contain suction channels, but unlike suction channels in the pulmonologist’s bronchoscope, the FFL’s channel is an inefficient one. Consequently, blood and secretions are aspirated better with a standard large-bore suc-tion device, such as the one normally used for traditional rigid laryngoscopy. Passing oxygen through the FFL’s work-ing channel tends to push blood and secretions out of the way, prevents fogging, and enhances the patient’s effective FIO2. The sniffing position allows for further posterior dis-placement of the epiglottis, which could also obstruct the view. Consequently, cervical extension with the head flat on the bed is preferable for flexible fiberoptic laryngoscopy. 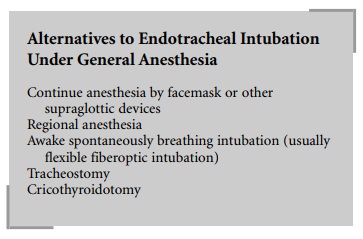 Various aids to FFL insertion exist. Care must be taken to seat oral airways exactly in the midline to prevent lateral displacement of the fiberscope, which adds to the difficulty of intubation. In cases for which it is especially important to do so, none of the presently available oral intubation air-ways adequately elevate the base of the tongue. Insertion of the nasal tracheal tube before the fiberoptic scope risks epistaxis before passage of the insertion tube. Furthermore, placing nasal tracheal tubes too far eliminates adequate space for manipulating the scope between the nasal tracheal tube and larynx. Difficulty threading endotracheal tubes into the larynx may arise if the endotracheal tube’s tip abuts the right arytenoid. To overcome this obstacle, the endotracheal tube should be retracted 1–2 cm and rotated 90° counterclockwise. This maneuver brings the tip ante-riorly, away from the right arytenoid.

After exhausting one’s personal repertoire of techniques, simply repeating methods that have already failed seems to have little chance of success. Additional instrumentation will lead to laryngeal and pharyngeal edema predisposing the patient to airway obstruction. The remaining options include continuing anesthesia by facemask; performing regional anesthesia; for urgent cases, awakening the patient and intubating with spontaneous breathing that day; awak-ening the patient and intubating with spontaneous respira-tions several days later to allow for resorption of airway edema; performing tracheostomy; and performing cricothy-roidotomy. Initial tracheostomy is indicated for laryngeal fractures and for abscesses impinging on the airway. 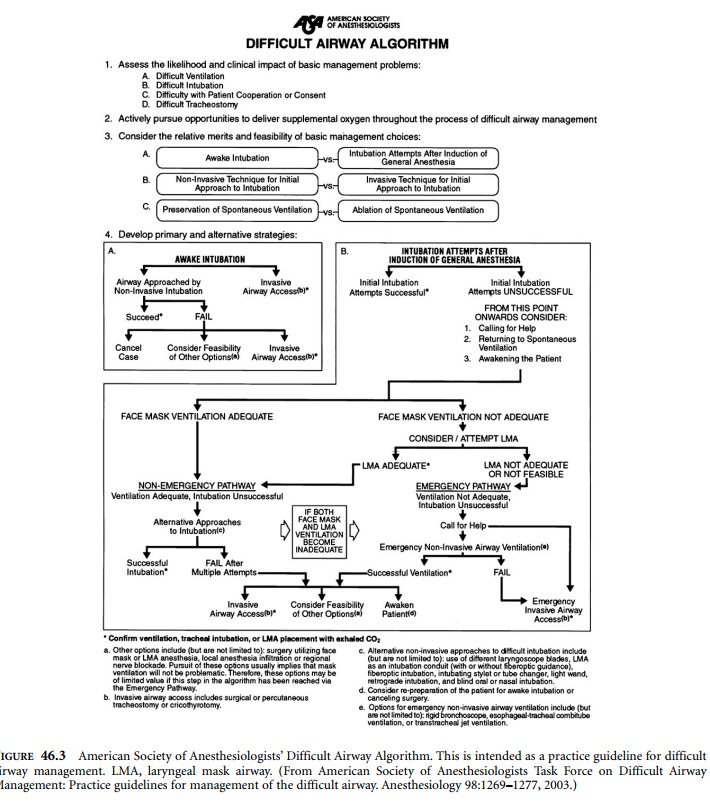