Although it makes intuitive sense to perform, and is consistent with best medical practices, airway evaluation frequently falls short of its intended goal.

Although it makes intuitive sense to perform, and is consistent with best medical practices, airway evaluation frequently falls short of its intended goal. Numerous rating systems based on recognized prediction criteria have been investigated. Most suffer from recurrent problems.

The first problem is nomenclature. A standardized definition of the “difficult airway” did not exist until 1993. At that time it was explained as a situation in which a con-ventionally trained anesthesiologist experienced difficulty with mask ventilation, difficulty with tracheal intubation, or both. For years, individual investigators needed to estab-lish their own definition of “difficult intubation” each time studies were conducted. Consequently, the endpoints of their work were not necessarily comparable to other investigations in the field, making comparative analysis of studies impossible. In 1993, the American Society of Anesthesiologists’ (ASA) Committee on Practice Guidelines for Management of the Difficult Airway offered a generally acceptable definition. Ten years later the definition was altered slightly. In 2003, “difficult tracheal intubation” referred to any intubation that required multiple attempts. This is a good clinical definition but lacks the precision required for scientific investigation. For example, some practitioners may perform a single laryngoscopy and, based upon the view obtained, elect to forego further attempts at laryngoscopy. Such cases may be handled with a supraglottic airway device, regional anesthesia, or other techniques. This situation does not meet the defini-tion of difficult intubation, when in fact it would have if one more attempt at intubation was performed. Thus, the ASA’s definition serves as a good clinical understanding of difficult intubation, but lacks the rigid, encompassing concerns required for scientific investigation. “Failed intubation” is an easier term to understand. A failed intubation exists when laryngoscopists give up and admit that traditional intubation will not be successful. The end-point is clear and occurs with an incidence of 1:280 in obstetric patients and 1:2,230 in the general operating room population.

The second problem is identifying features that predict difficult intubation. This is frequently accomplished by attempting to recognize characteristics found in patients who have proven to be difficult intubations. The problem with such an approach is the lack of information about the same characteristics in patients who are easy intubations. As Turkan points out, we do not even know the normal values for many prediction criteria. A better method is to apply multivariate analysis to patient populations in a prospective manner. In that way, a single factor can be compared for difficult and easy intubations. Various rating systems attempt to combine multiple predictors into a formula. To date, none are satisfactory.

The third problem is validating the tests, once they are promulgated. Validation tests performed on the same patient population used to identify them are misleading. This is like counting the number of envelopes in a par-ticular mail box, predicting that all mailboxes contain that number of envelopes, and then validating the prediction by re-counting the envelopes in that same mailbox. Validation must be performed by counting the envelopes in multiple different mailboxes. In the same way, validation of difficult intubation predictors must be performed in multiple different patient populations. The experimental patient sample cannot be used to validate experimental results. Different sample populations are needed for that.

The fourth problem is the experimental methods. Individual practitioners differ and clinical practice has shown that a particular patient who is difficult to intubate in the hands of one laryngoscopist may be successfully intubated by another laryngoscopist. In this way, experi-mental designs utilizing more than one laryngoscopist introduce a source of variation, which detracts from attempts to control experimental conditions. Relying on a single laryngoscopist obviates this problem, but limits the number of patients that can be enrolled into a single study. Another source of experimental error is observer variation. Observations performed by different experimenters are subject to variations and introduce another source of erro-neous data. The best way to prevent this problem is for all observations to be performed by a single experimenter. This too may limit the number of patients enrolled in a single study.

In 1984, Cormack and Lehane described a grading system for comparing laryngoscopic views as follows:

·  Grade I: the entire glottic opening

·  Grade II: the posterior laryngeal aperture but not the anterior portion

·  Grade III: the epiglottis but not any part of the larynx

·  Grade IV: the soft palate but not the epiglottis 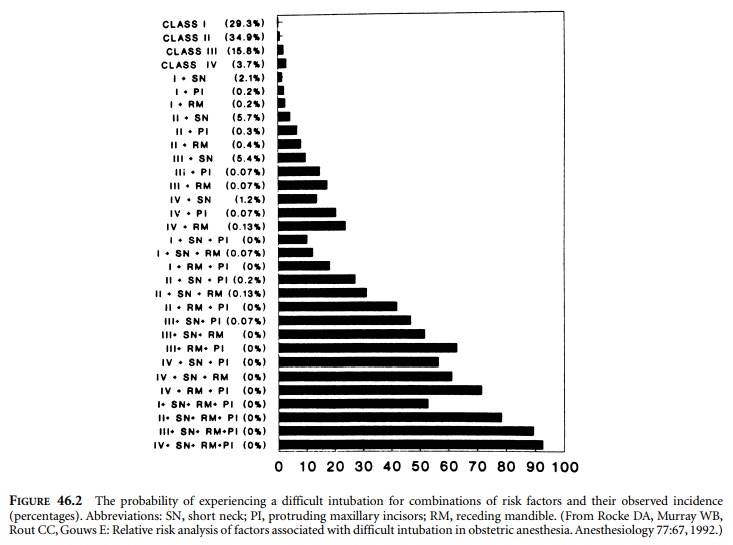