Describe the anatomy and physiology of normal neuromuscular transmission

Neuromuscular transmission begins with depolariza-tion down the axon of a motor nerve to the motor nerve terminal (Figure 23.1).

Describe the anatomy and physiology of normal neuromuscular transmission.

Neuromuscular transmission begins with depolariza-tion down the axon of a motor nerve to the motor nerve terminal (Figure 23.1). The wave of depolarization is prop-agated by sequential opening of sodium channels. This allows sodium to enter the cell, increasing the intracellular concentration of positively charged ions. The transmem-brane potential is altered from negative to positive in the area of the open sodium channel. This electrical event causes the next sodium channel to open and continues the process until the nerve terminal is reached. When the nerve terminal is thus depolarized, calcium channels open, allow-ing calcium to enter. The rise in intracellular calcium facil-itates the binding of intracellular “packets” or quanta of acetylcholine to the cell wall bordering the neuromuscular junction. Acetylcholine molecules are then released into the junctional (synaptic) cleft. 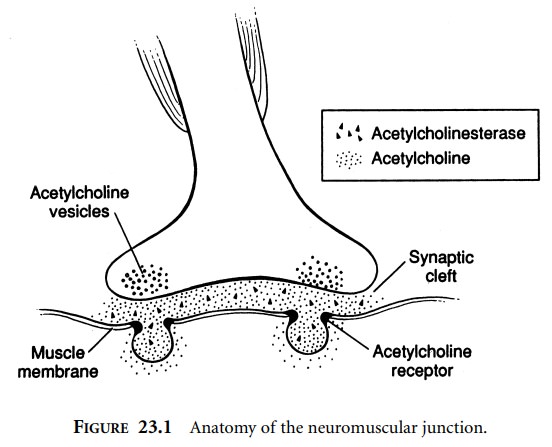 Nicotinic acetylcholine receptors on the motor endplate of the muscle cell have binding sites for acetylcholine. This receptor is made up of five transmembrane protein chains, two of which are identical and contain one acetylcholine receptor site each. When two acetylcholine molecules bind to these two sites, the receptor is activated to respond as an ion channel for the rapid ingress of sodium. This move-ment of positively charged ions into the cell creates a small electrical current. When enough receptors are activated, the summation of these small electrical currents becomes sufficient to depolarize the endplate.

Depolarization of the endplate stimulates the sodium channels in the perijunctional area to open, and thus the electrical current is propagated along the myocytes by sequential opening of sodium channels. When the myocytes are depolarized, stored calcium ions from the sarcoplasmic reticulum are released intracellularly. The free intracellular calcium ions activate myosin adenosine triphosphatase (ATPase), which precipitates excitation– contraction coupling of actin and myosin proteins to cause contraction.