Describe other recognized side-effects of succinyl-choline

Succinylcholine administration is associated with a number of complications, ranging from benign to lethal.

Describe other recognized side-effects of succinyl-choline.

Succinylcholine administration is associated with a number of complications, ranging from benign to lethal. They include prolonged blockade (discussed above), myal-gias, increased intraocular, intragastric, and intracranial pressures, dysrhythmias, masseter muscle spasm, anaphy-lactic and anaphylactoid reactions, and hyperkalemia.

Myalgias have been reported postoperatively in 5–83% of patients receiving succinylcholine. This complication is more common in ambulatory patients. It can be attenuated by pretreatment with a small dose of a nondepolarizing muscle relaxant or lidocaine. The mechanism of succinyl-choline-induced myalgias is thought to be a result of a shift of calcium intracellularly, leading to damage of cellular structures via activation of phospholipase A2. Patients who develop myalgias are reported to have a fall in serum calcium after succinylcholine. Alternatively, muscle spindle damage from asynchronous muscle contractions that is due to high intracellular calcium concentration has been proposed as a mechanism of myalgias following succinyl-choline.

Intragastric pressure is also reported to increase follow-ing succinylcholine. The increase is related to visible fasci-culations and may be attenuated by a small dose of a nondepolarizing muscle relaxant before succinylcholine.

Intracranial pressure increases after succinylcholine administration to laboratory animals. The issue is more complicated in humans because it is difficult to separate succinylcholine’s effect from those of other actions per-formed at the same period of time. Different views are expressed by different experts regarding the safety of succinylcholine in patients with raised intracranial pres-sure. Potential risks of brain stem herniation must be weighed against those of airway compromise from pro-longed onset of profound muscle relaxation achieved in other ways.

Masseter muscle spasm (MMS) following succinyl-choline presents a complicated problem. It has been sug-gested that MMS following succinylcholine is a harbinger of malignant hyperthermia (MH). Many of the patients who have demonstrated MMS have had positive muscle biopsies for MH susceptibility. Because succinylcholine is a triggering agent for MH, some authors have recommended aborting surgery and monitoring for MH. In a large retro-spective series published by Littleford et al. (1991), patients who had MMS were allowed to continue with their anes-thetic (often including inhaled agents) and surgery. None of their patients developed MH; however, some showed biochemical abnormalities associated with MH. VanDerSpeck et al. (1988) demonstrated in children that masseter muscle tone increases following succinylcholine while limb muscles are relaxed. This may represent a variant of the normal relaxant response to succinylcholine. However, it does not preclude the development of MH. Clinical management following succinylcholine-induced MMS is controversial.

Sustained generalized muscle contracture is associated with MH and must be considered in a different light from isolated MMS. Sustained muscle contracture may also occur in patients with myotonia and dermatomyositis. In these latter circumstances, laryngoscopy may prove diffi-cult, but metabolic disturbances are unlikely.

Anaphylactic and anaphylactoid reactions may occur to many drugs used in anesthesia. Muscle relaxants are most often implicated (80% of cases), and succinylcholine is the most frequent relaxant responsible (54%).

Hyperkalemia is a serious complication of succinyl-choline. Under certain conditions, upregulation (prolifera-tion) of nicotinic receptors occurs. This increase in receptors is associated with the appearance of extrajunctional recep-tors. When exposed to succinylcholine, these receptors allow a massive egress of intracellular K+, leading to hyper-kalemia. Normal increases in serum K+ following succinyl-choline are 0.5–1.0 mEq/L. This rise usually lasts 10–15 minutes. The pathologic response may be far greater.

Increases of 7.0 mEq/L have been measured. Acute hyper-kalemia may cause peaked T-waves, cardiac conduction block, ventricular dysrhythmias, or sine-wave cardiac arrest. Conditions associated with a hyperkalemic response to succinylcholine are listed in Table 23.1. 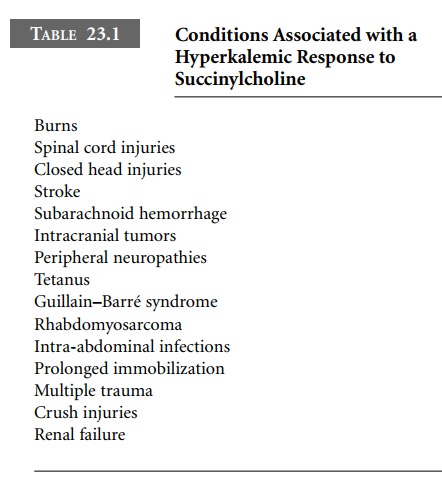 Many authors suggest that a safe period exists several months after injury. This is not well documented in the lit-erature. The potential risk of hyperkalemia must be weighed against the benefits of succinylcholine administration.

Hyperkalemic dysrhythmias following succinylcholine must be rapidly diagnosed and treated. Hyperkalemia may respond to induced alkalosis, which forces K+ back into the cell. This may be accomplished by hyperventilation and bicarbonate administration. Calcium chloride, 15 mg/kg intravenously, antagonizes the cardiac conduction effects of hyperkalemia and may restore sinus rhythm. Insulin and glucose (10 U of regular insulin in 25 mL of 50% dextrose) also drive K+ intracellularly.