When succinylcholine is given to a patient for a pro-longed period of time or in large doses, the nature of the block appears to change.

When succinylcholine is given to a patient for a pro-longed period of time or in large doses, the nature of the block appears to change. The second form of block is referred to as a phase II, desensitization, or dual block. The recovery from succinylcholine in this circumstance generally is prolonged, and the character of the block is altered. Repeat nerve stimulation (train-of-four) following exposure to suc-cinylcholine results in muscular response that is unchanged with repeated stimulation (no fade or decrement of response), and no fade occurs with tetanic stimulation (Figure 23.2). When a phase II block develops, fade is evident on train-of-four stimulation (T4/T1 less than 50%) and on tetanic stimulation. Post-tetanic potentiation may also be present. These patterns of response are typical of non-depolarizing muscle relaxants, not depolarizing drugs such as succinylcholine. The appearance of this block is related to the time and dose of succinylcholine administration. Reports of phase II blocks have been associated with 2–10 mg/kg administered over 1 hour. The onset may be accel-erated by inhalation anesthetics. 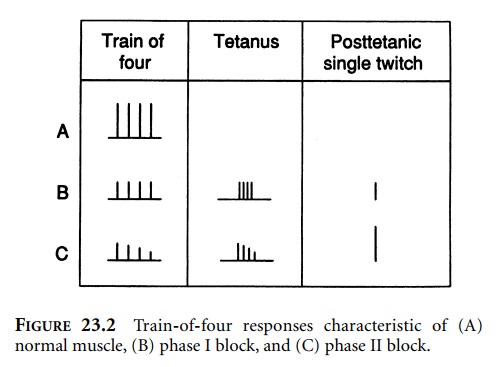 Proposed mechanisms for phase II blockade include channel blockade of the receptor by succinylcholine, desen-sitization of the receptor in the presence of excessive ago-nists, and persistent ion flux causing distortion of the junctional membrane. Channel blockade refers to the interference with ion movements through the activated receptor by an obstructing molecule such as succinylcholine. When a receptor remains open (activated) for a prolonged period of time, such as during succinylcholine infusions, a molecule is more likely to enter the channel of the receptor and obstruct ion movements. Receptors are known to exist in at least three states: activated, receptive, and desensitized. The desensitized receptor is unable to respond to an agonist, even though the agonist may bind to the receptor. Prolonged agonist activity is thought to predispose to an increase in receptors in the desensitized state. If enough receptors are desensitized or have their channels blocked, they can no longer participate in the maintenance of endplate depolar-ization, which is responsible for succinylcholine’s neuro-muscular blockade.

Patients with atypical plasma cholinesterase are more likely to develop phase II blockade. This may be the result of excessive amounts of succinylcholine reaching the receptor and not being rapidly metabolized in the plasma before it reaches the neuromuscular junction. During the transition from phase I to phase II, a period of tachyphylaxis to succinylcholine has been noted by some authors.