• To know the meaning of democracy

• To know the types of democracy

• To know and appreciate the structure of our constitution

• To know the aims of democracy

The world will constantly embrace the feet of the great king who rules over his subjects with love.

The teachers of Nallur Government High School were doing the final preparations for the programme ‘Let’s know the society’. The Singaravelar Hall was filled with students. The Headmaster Mr. Jeeva welcomed the Chief Guest of the day, Advocate Mr. Rajasekaran. When he brought the chief guest to the hall, the students observed silence.

Mr. Britto, the history teacher welcomed the gathering. The chief guest, Mr. Rajasekaran stood up to address the students.

Beloved brothers and sisters! I thank you for inviting me to this programme. I’m not going to speak on this occasion.” When he said this and paused, everyone looked at him in wonder.

“Democracy should be found everywhere, shouldn’t it? So I am going to converse with all of you,” he said. He requested to give a microphone to the students. Mr. Rajasekar said,

“First let me ask you a question. Do you know what kind of society did the early manlive in?”

“In the beginning, they were hunters and gathered food. Later, they settled near rivers and practised agriculture,” said Deepika, a sixth standard student. 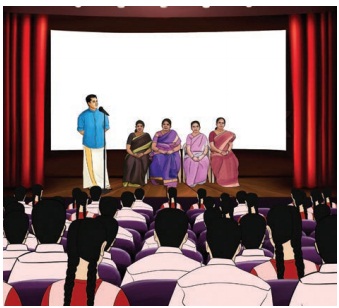 “Yes, when man started to live in groups, tribes were formed. Every tribe had its own chief. These groups fought among themselves for land, water and other resources. Those who emerged victorious, formed kingdoms by uniting the other tribal groups. These kingdoms later integrated to form empires.”

Arun questioned, “So the chief would have become the king, wouldn’t he?”

“Yes, that was how monarchies ruled by kings were formed.”

Suganya asked, “Was this how monarchy emerged in our country too?"

“Yes, this was how the system of monarchy formed throughout the world. Also, our country was ruled by kings and emperors and then came under the British rule.”

The students answered together, “After centuries of struggle and many sacrifices, we got freedom from British colonialism.”

“We adopted democracy as our ruling system when our country got freedom,” said Rajasekaran.

Devarajan asked him, “What is democracy?”

“When you start a Sports Club, you’ll share the responsibilities. Then you would enjoy its benefits, but share the income and expenditure, wouldn’t you?”

“Similarly, the citizens of a country select their representatives through elections. Thus, they take part in the direct governance of a country. This is termed Democracy. In a democratic form of government, a considerable amount of power lies with the people of that nation. People can participate in the politics of the country and decision making processes. There are different types of democracy.”

“Yes, there are various types of democracy in practice around the world. Among those, direct democracy and representative democracy are the most popular forms of government.”

The birth place of democracy is Greece.

“What is Direct Democracy?” asked Sirajudeen.

“In a Direct Democracy, people have the power to frame laws. If we consider your Sports Club as an example, you all can discuss and amend laws and rules. The perspective of each member is considered and each one expresses his view. But how will you take a final decision?”

“The choice of the majority will be accepted. The others will also give their consent,” said Selva.

In a Direct Democray, only the citizens can make laws. All changes have to be approved by the citizen. The politicians only rule over parliamentary procedure. Switzerland has had a long history of a successful direct democracy.

Is it possible to practise Direct Democracy in India?

“What do you mean by Representative Democracy?”

“Imagine that your Sports Club has more number of members now. Is it possible for hundreds of them to gather and discuss to take various decisions?”

“In that case, all the members should be represented by a group of representatives, shouldn’t they?”

“Yes,” agreed the students in union. 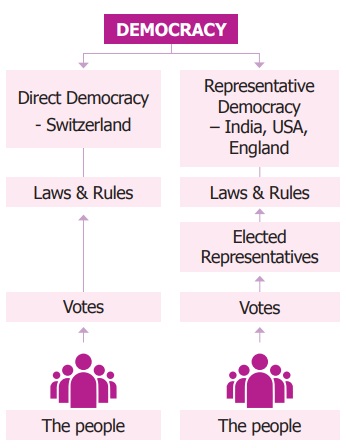 “Those group members will administrate the sports club on behalf of all the other members. To select these representatives, elections are held. For example, many contest for the post of the Head, Secretary, Treasurer and members of the administration group.

In the end, those who gain the maximum number of votes will be given the posts. On behalf of the other members, they obtain the power to take decisions in a democratic manner. This is termed as Representative Democracy. 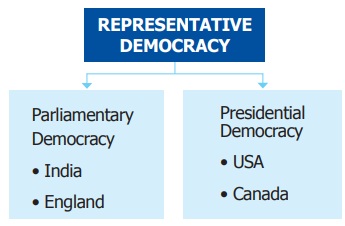 “What is meant by democratic decision making?” questioned Judith.

“In the system of democracy, the power to take decisions does not lie with the Head. On the contrary, a group holds the power, but adheres to the rules and regulations. All the members of the group hold open discussions and take final decisions only when everyone is convinced. This is called democratic way of decision making.” 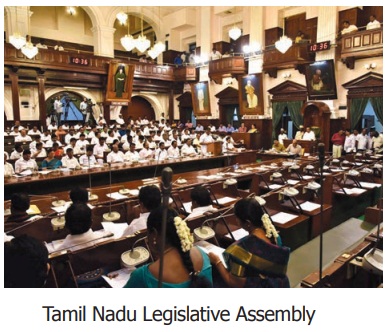 “Yes. In a highly populated country like India, if people want to live peacefully, they have to follow certain rules and regulations, rights and duties properly. Hence, the constitution of India guides us in all these aspects and plays an important role in maintaining law and order.”

In 2007, the UNO General Assembly resolved to observe 15th September as the International Day of Democracy.

“What are the rights given in our Constitution?”

“Our Constitution ensures freedom, equality and justice to everyone.”

“What other features are found in our constitution?”

“It defines the political principles, the structure of the government institutions and methods to follow these rules and regulations, the powers and responsibilities. And also, it fixes the Rights and Duties and the Directive Principles of the citizens.Thus our constitution provides a structure to us.”

“Is the constitution of India such a detailed one?” asked Tamizhselvi in amazement.

“Indian Constitution is the longest written constitution in the world. It is drafted by the Drafting Committee of the Constituent Assembly headed by Dr. B.R. Ambedkar. That is why we call him the ‘Chief Architect of our Constitution’ Rajasekaran concluded.

The students clapped with joy and thanked him for the simple explanation of democracy.

Democracy is defined as “Government of the people, for the people and by the people.” 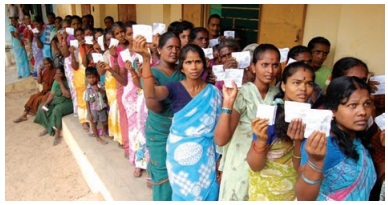 New zealand is the first country to allow women to vote (1893). Voting rights to women were given in 1918 and 1920 in the UK and USA respectively. At the same time, the wealthy alone were given the voting rights in India. Many leaders like Mahatma Gandhi kept insisting on giving voting rights to all. Now in India, all the people above 18 years of age enjoy Universal Adult Franchise.

The world statisticaldata on democracy declares that 79% of the Indian citizens have faith in the democratic system. Hence, India ranks first among the democratic countries of the world. 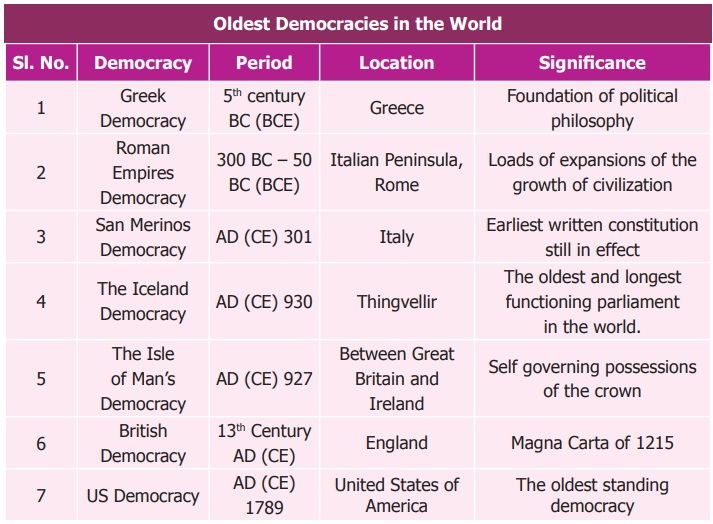 1. Democracy - a government formed by the people

2. Election - a process by which a representative is chosen

4. Government - a group of people with a authority to govern a country

* "Government of the people, by the people for the people" is defined as democracy.

* Our constitution ensures freedom, equality and justice to everyone.

* In India, all the people above 18 years of age enjoy Universal Adult Franchise.

Through this activity you will about structure of government of In and  political systems!.

Step 2: Click the “political systems” to know government of India.

Step 3: Click the “English” button the map will appear.

Step 4: Choose and click “Tamilnadu” to know about the state government.